Brett Lawrie to Stay in Minors Once Healthy

This piece of news was glossed over on the long weekend, but the Jays plan to keep Brett Lawrie in the minors once healthy.

Share All sharing options for: Brett Lawrie to Stay in Minors Once Healthy

There was an interesting piece of news that flew a bit under the radar thanks to the Canada Day long weekend.

According to Jason Mastrodonato of MLB.com, the Toronto Blue Jays will keep third baseman Brett Lawrie in the minor leagues even after he returns to health.

The Blue Jays won't rush Lawrie this time. Even when his injured left ankle has healed, he'll stay in the Minors until the team feels his bat is ready.

"We want him playing good before he comes back," Gibbons said. "We jumped the gun a little bit and brought him back out of necessity, and he probably wasn't ready to face Major League pitching. So a slow start to that magnifies it."

What Gibbons is saying isn’t wrong – Lawrie was definitely rushed back at the start of the year. A young player, more than any other, benefits from the instruction and development provided by spring training. By missing spring training and being rushed up, Lawrie was essentially getting into the groove during regular season at bats.

Lawrie was walking less, striking out more and putting less of a sting on the ball (even though his isolated slugging was up, his line drive rate was at a paltry 14.4% and he had a 10.5% infield fly rate).

It was just 153 plate appearances, though, and Lawrie was still a net positive for the team because of his excellent defense at the hot corner. In his absence, the Jays have been forced to use a combination of Maicer Izturis, Mark DeRosa and Edwin Encarnacion there, none of whom is an acceptable option for more than a day or two at a time.

But there are those who feel like Lawrie was a detriment to the team because of his attitude and demeanor, something that is kind of ridiculous. I doubt very much Lawrie arguing with umpires was the cause for Brandon Morrow’s injury or R.A. Dickey’s lack of feel for his knuckleball. Lawrie getting hurt didn’t give Esmil Rogers’ two-seamer extra sink.

But there’s a part of that argument, the fact that the team no longer needs to rush him since they’re playing relatively well, that holds some weight. More so than at the start of the year, they can afford to be patient.

A friend suggested to me that this was a de facto suspension for his behavior, but I don’t think that’s the case. With the amount of money being spent on the team this year, disciplinary measures would probably be of the variety that don’t put wins at risk, which keeping Lawrie in the minors does.

With that said, it’s not necessarily the wrong move. Lawrie has value to the team in the short-term, but if the organization feels his hitting tools need work then this could be a way to maximize his long-term value. Perhaps that's as early as later this summer. You can’t blame them for wanting to take it slow and build up their 23-year old former top prospect.

And do keep in mind that he’s 23. Andrew Stoeten had a nice piece reminding people of how good Lawrie’s been, and a suggestion he made – that Lawrie’s overall numbers might be hurt by his performance around injuries – led me to pull some data.

The graph below shows Lawrie’s 30-day rolling average OPS over his career, with his injuries noted. If injuries had been at the root of some of his poor performance (ignoring the developmental effects that also might be at play), you’d expect to see drop offs in the time after an injury is denoted. The 30-day OPS basically shows "his OPS for the last 30 days on this date," which should give us a more clear view of his performance around that time than his overall OPS or another stat would. The 30-day K% was included as a secondary indicator, though one that could be more to do with approach than a skills decline. 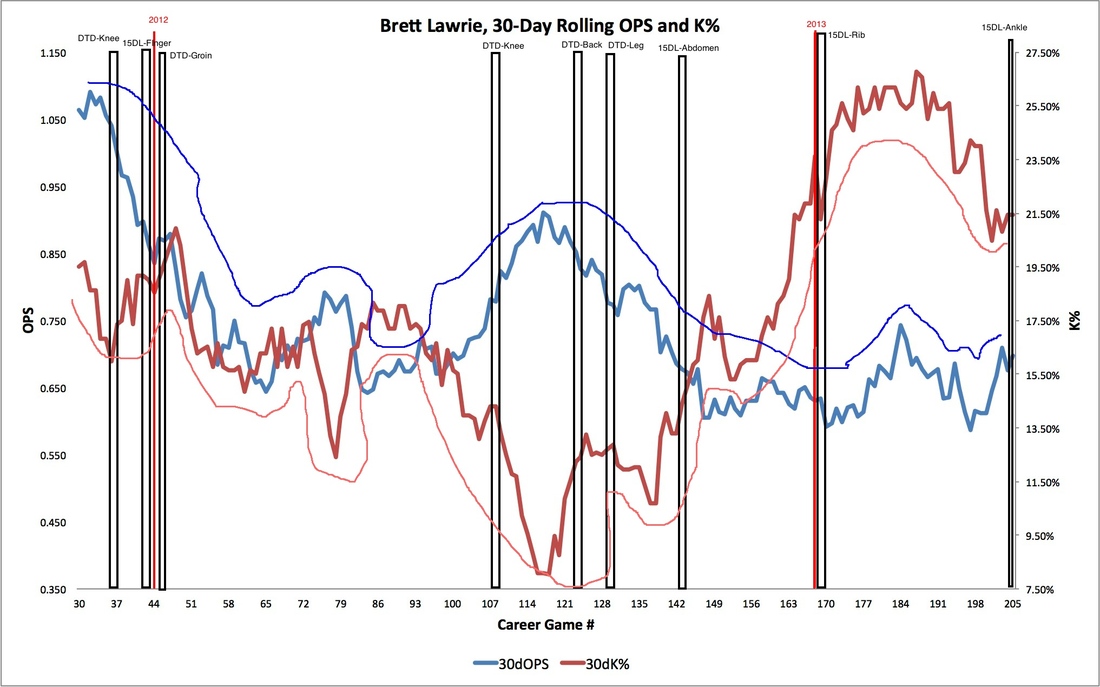 It’s not hard to draw a line from injury to performance, and it’s especially concerning that he rarely had any minor league time in those years (he had just four minor league plate appearances in 2012 and is all the way up to 13 this year). Basically, Lawrie, when hurt, has either gutted it out or gone from the main roster to the DL and back without rehab time. That’s going to hurt your bottom line, no matter what.

So is this the right move? Well, it’s tough to say. I think it’s the wrong move to announce it this early, when Lawrie still has ample time remaining under the "rehab assignment" provisions. What if plans change? What if there are injuries? They could have just as easily held off on commenting until it was time to make an actual decision.

But for his long-term development, it's probably a small positive that will cost the team in the field in the interim. It’s a chance for Lawrie to do really well at the plate again, something he hasn’t done since 2011. Lawrie doesn’t seem like the type to lack for confidence, but a chance to slow things down for a couple of weeks and get his rhythm back probably won’t hurt.

News note: Lawrie was rained out today and will apparently play Thursday at Lansing, pushing his timeline back for getting to Double-A New Hampshire. That is per all of the beat guys, who tweeted within seconds of each other Tuesday evening.