The Jays will be faced with some difficult decisions over the next few weeks and the remainder of the 2013 season.

The July 31 trade deadline is fast approaching. Should the Jays seek to improve the roster through trades, and if so which players should they target to acquire … or to trade?

There are several international free agents "on the block", headlined by Miguel Alfredo Gonzalez. Should the Jays be making a bid in a game where it could take 5 years and $60 million to win the pot?

And there are Jays who will become arbitration-eligible or free agents after 2013. Should the Jays be talking to players like Johnson, Rasmus and JPA about long-term contracts?

One major factor influencing these decisions is payroll. It is easy to just assume that Rogers will "put a crowbar in their wallet" and increase payroll without limit, but that would not be good business … or even good baseball.

So, to provide context for the wild and crazy speculation (!) that we will all be doing over the next few weeks, here is my take on the Jays 2014 team payroll. (All of my figures are in $000)

Looking at the Jays’ current 40-man roster (45 players, including injured reserve) + Ricky, the team has 13 players under fixed contract for 2014, as follows: 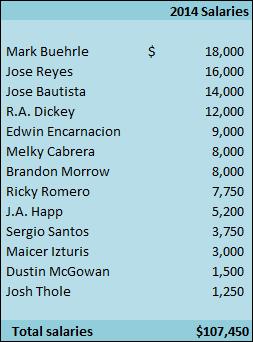 The Jays have 10 players who do not yet qualify for arbitration and are accordingly earning roughly the minimum of $500k. If we assume that they will get an average increase of 10% in 2014, the total payroll for those 10 players will be roughly $5-6 million.

The Jays have three players with team options in 2014.

For purposes of this discussion, I will assume that the Jays will pick up the options on Janssen and DeRosa and buy out Adam Lind.

The Jays have 5 players eligible for arbitration in 2014, as follows: 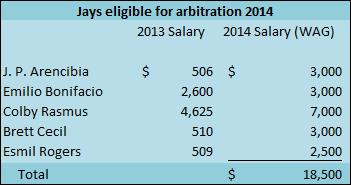 For purposes of this discussion, I assume that the Jays will offer arbitration to all 5, and will sign them at the WAG (wild-ass guess) figures I show above.

The remaining players are either free agents in 2014 (Josh Johnson, Darren Oliver, Rajai Davis) or players under minor-league contracts. The 2014 Jays payroll accordingly looks like this:

A payroll of $138 million would have been the 8th highest in baseball in 2013 (just ahead of Texas’ $127 million). It is likely unreasonable to expect Rogers to go much beyond that.

If you were the Jays, what would you do?

Do you need additional bench players (to replace Rajai, for example?) Or can you use a Gose or a Sierra?

With essentially no money to play with, does that mean that you give up on signing a Garza … or extending Johnson … bringing back Doc Halladay … or gambling on a Gonzalez?

Do you start making deals now to increase your flexibility for 2014? Trade a Buehrle, for example, even if the return is minimal (and even if you have to throw some $$$ into the deal?)

Article revised to correct earlier errors - thanks to MjwW for the pickups!