Who Are Ya: Chris Archer (Best Lineup This Year!)

Share All sharing options for: Who Are Ya: Chris Archer (Best Lineup This Year!)

R.A. Dickey takes on Tampa Bay today as the Blue Jays try to salvage a game during this series. His opponent on the mound will be 24-year-old phenom Chris Archer. Archer was involved in the Matt Garza deal with the Cubs as the main prospect piece going to Tampa Bay. After coming up for a cup of coffee last year, Archer has been given 9 straight starts this season and has solidified his place in the Tampa Bay rotation. His ERA sits at 2.96 masked by a .238 BABIP that hides his low strikeout numbers leading to a FIP of 4.21.

Chris Archer throws a fastball, sinker, slider, and changeup with his hard stuff comfortably sitting mid-90's. As you can see below, his fourseam fastball and slider are his two main pitches and have been most successful this season. That being said, none of his pitches have gotten over 30% Whiffs/Swing, which must be a little troubling for the Rays' brass. 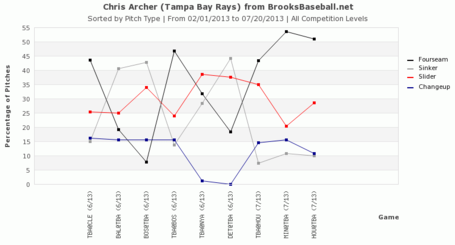 As with Jeremy Hellickson yesterday, Archer throws most of his pitches outside the zone on the arm side: 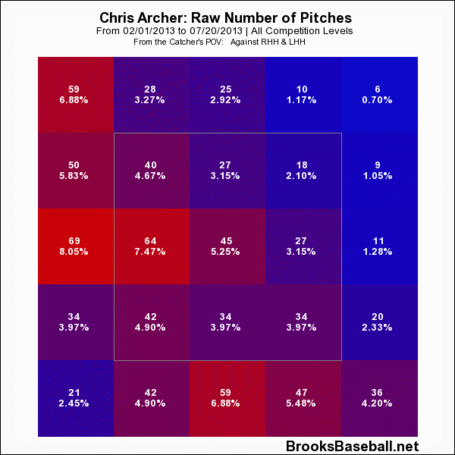 Will today be the day Archer throws more pitches in the zone, than outside of it? Oh the intrigue! 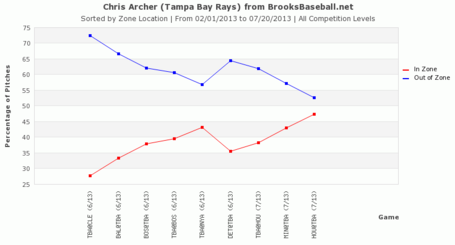 Chris Archer is on a huge hot streak right now, which has been the case for all three pitchers the Rays have thrown at the Blue Jays so far. Aside from not allowing a run in the past 16 innings, Archer also pitched a complete game five hit shutout against Houston last time out.

The lineup I'd recommend to face Archer would be:

EDIT: As Steve02 noted in the comments, this is the first time the Blue Jays "best" lineup has been put on the field this season! At the beginning of the season Brett Lawrie was missing, Jose Reyes was gone mid-season, and Melky Cabrera was injured when the previous two players returned from their DL stints. This means the Blue Jays will obviously win right? Right??
<blockquote class="twitter-tweet"><p>Today&#39;s <a href="https://twitter.com/BlueJays">@BlueJays</a> lineup:&#10;Reyes-SS&#10;Bautista-RF&#10;Encarnacion-1B&#10;Lind-DH&#10;Cabrera-LF&#10;Rasmus-CF&#10;Izturis-2B&#10;Thole-C&#10;Lawrie-3B&#10;&#10;Dickey-P</p>&mdash; Blue Jays-Official (@BlueJays) <a href="https://twitter.com/BlueJays/statuses/358953163019124739">July 21, 2013</a></blockquote>
<script async src="//platform.twitter.com/widgets.js" charset="utf-8"></script>
For the "Find the Link" today:
Find the link between Chris Archer and the bench warmer/roster spot taker on the current Blue Jays roster.
Enjoy the game? Or go outside and forget about this thing called baseball.