RationaL has written a wonderful hip hop tribute song to the great Tom Cheek. Give it a listen here.

Share All sharing options for: "A Swing and a Belt" RationaL's hip hop tribute to Blue Jays broadcaster Tom Cheek 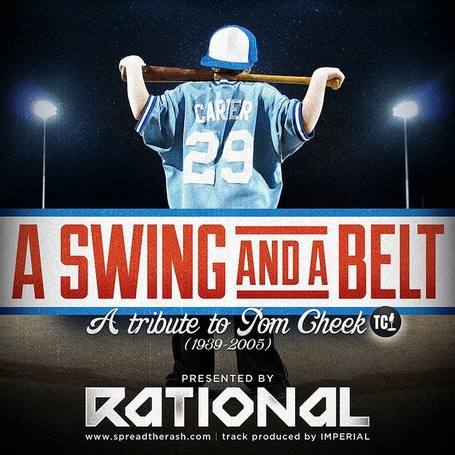 A few weeks ago I got an email from a hip hop artist from Saskatoon named RationaL telling me about a song he is going to release called "A Swing and a Belt", which was a tribute to our favorite baseball announcer Tom Cheek. I'll admit to knowing nothing about hip hop music.

It is just a wonderful song. Of course, I'm biased; anything that includes clips from Tom Cheek himself and has so much Blue Jays nostalgia in one song I'm going to love. It is really just perfect.

If you don't believe me, here is a testimonial from Jays broadcaster Buck Martinez:

"RationaL has captured everything that Tom Cheek was in regards to baseball. He had his passion, he understood his love of the game, he understood all the great moments in Tom Cheek's broadcasting career. And he weaves them into "A Swing and a Belt"in such a way that it brings back so many memories for fans, baseball people and media people that really captures the essence of Tom Cheek's career with the Blue Jays. I don't think it could have been done any better."

But you can listen for yourself:

A Swing and a Belt

You can download it for free here. It's very kind of RationaL to let us all have this for free.

I sent RationaL some questions about the song, here are his answers:

How does a guy from Saskatoon get into hip hop? Tell us a bit about RationaL.

I fell in love with hip hop when I was around 12 or 13 years old. I was a terrible rapper when I started out but I had such a love and a passion for it, I just kept doing it (aspiring rappers, let this be a lesson) and now I have got a couple of albums under my belt. Won awards. Toured with Grammy and Juno nominees. Toured across Canada multiple times and as far as South Africa and the US. I've charted on college radio across Canada and have shared the stage with everyone from Jadakiss and Machine Gun Kelly to Slaughterhouse and Pharoahe Monch.

I'll admit to knowing nothing about hip hop, but I really enjoyed this. What gave you the idea to sing about Tom Cheek?

It was simple. Tom Cheek is the greatest Toronto Blue Jay of all time. I was so excited when we FINALLY got the word of his Hall of Fame induction. I took all that passion and excitement and poured it into 4+ months and 200+ hours of studio, production and engineering spent on "A Swing and a Belt".

Oh, it also helps when you pick up five All-Star caliber players in the offseason and are the odds-on Las Vegas favorites to win the World Series on Opening Day. Second half of the season - here we come!

You've obviously been a Blue Jay fan for a long time, what started your fandom?

Saskatoon Blue Jays Little League Baseball (shout out Coach Riggs)! I played since I was a kid.

Just me and my $17 cleats, Blue Jays wristbands, blue Guzman autographed glove (haters are still jealous) and skin-tight pants with the stir-ups.

Close your eyes and paint that visual, Canada.

I really love all the Blue Jay history in your song, I bet it was a lot of fun picking out the images that filled the song. Are there any lines that missed the final cut that you wished you could have used?

Great question. I had lines about the crazy Game 4 in Philly in 93. Also about Stottlemyre's chin-check in that same series. I also had some lines about Borders and Molitor's MVP awards. We just ended up running out of room to be honest, 5 minutes was the max length we wanted to take "A Swing and a Belt" and we couldn't be happier with the end results. Neither could the Blue Jays and Sportsnet!

As much as I love the "Touch Them All, Joe" I was really glad you sampled the end of the 1992 World Series. Do you remember that moment?

1992 was the beginning of my life-long love affair with the Blue Jays. I'll never forget it. I still watch those old World Series DVD's religiously.

Have you shared this with the Blue Jays or with Sportsnet? What sort of response did you get? Maybe we can hear a little less of "Stadium Love"?

More "A Swing and a Belt" and less "Stadium Love"?! Yes, please!

The Blue Jays heard the song and they loved it. They will be dropping it on BlueJays.com middle of next week as well as promoting it across Canada on all of their social media platforms.

And I could not be prouder to announce that I am flying to Toronto and Monday morning we begin filming at Rogers Centre with the Sportsnet crew for the official music for "A Swing and a Belt"!

Has the Cheek family heard this?

No, unfortunately. That is really the only big disappointment we've encountered with "A Swing and a Belt" so far. Minor Leaguer shared with me that Shirley Cheek mentioned at Tom's Canadian Baseball Hall of Fame induction a few weeks ago that she was concerned that Tom's legendary legacy will be forgotten amongst this new generation of Blue Jays fans.

This is EXACTLY where RationaL comes in! It would be my greatest honor to have the privilege of sharing "A Swing and a Belt" with the Cheek Family.

Editor's note: since the time of the interview, RationaL has informed us that Shirley Cheek has heard the music (via Bob Elliott) and had emailed him.

Thanks for this RationaL.

Also, Rational is offering other free music, just click on this link.

And if you think this is good, wait until you here his Buck Martinez tribute song, "A Swing and a Drive, it's back, it's....caught by the shortstop". Just kidding.

Thanks RationaL, it really is a great song.