Who Are Ya: Hyun-Jin Ryu

Share All sharing options for: Who Are Ya: Hyun-Jin Ryu

Josh Johnson goes up against Hyun-Jin Ryu tonight in a little bit of interleague action with the Los Angeles Dodgers. Ryu, a 26-year-old left hander, came over from Korea this off-season after his old team the Hanwha Eagles accepted a rumoured bid of $25,737,737.33 from the Dodgers. After agreeing to a six-year $36 million contract Ryu was all set for his Major League career to begin. His season has been a bigger success than expected, with Ryu starting 18 games currently having an ERA of 3.09 and a FIP of 3.57. Nothing too crazy stands out about his line and his rookie season has been overshadowed a bit by the emergence of Yasiel Puig as a possible superstar in the near future.

Before Ryu came over, many scouts were not sold on Ryu including Keith Law: 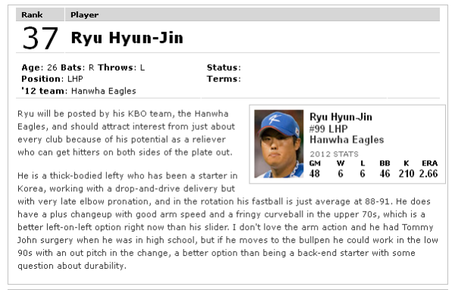 Hyun-Jin Ryu throws the four main pitches, mainly focusing on the fastball-changeup combination as left-handed pitchers often do. His fastball velocity was always a big question mark and he's sat in the low 90's this year, which is a little bit higher than people even thought it would be when he was signed. 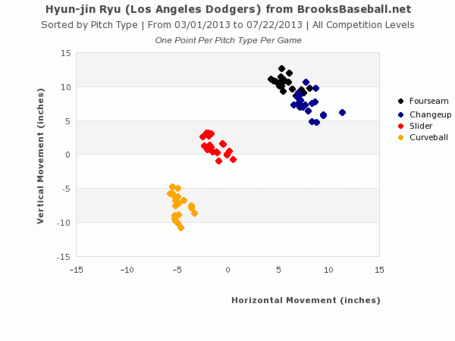 GIF's of his delivery are hard to come by, but there is this:

Clayton Kershaw and Ryu seem to have got the dance moves down, but what on earth is Matt Kemp doing. That's a strange interpretation of that dance move.

In a small sample of half a season Ryu has been hit a lot harder by same handed batters (.349 wOBA) over right handed hitters (.274 wOBA). This makes sense, regardless of the sample size though, as Ryu's great changeup would be much more difficult for opposite handed hitters to get a piece of. In fact, against left handed hitters Ryu is basically reduced to a fastball-slider combination leaving his best pitch out of the equation.

That being said, the lineup for today should be:

I wouldn't be too upset if the switch hitters batted left handed to negate Ryu's changeup, but it seems doubtful that that would happen.
For the tricky "Find the Link" today:
Find the link between Hyun-Jin Ryu and the surprise second place team in the NL East.

Enjoy the game tonight. If you're looking for a fun playoff team to start cheering for, the Dodgers would be a very good choice.