After looking through the historical records, Minor Leaguer found something that happened for the first time in major league history two months ago today.

Share All sharing options for: 66 versus 66: Blue Jays' Munenori Kawasaki and Orioles' T.J. McFarland made history

When the Blue Jays’ Munenori Kawasaki stepped up to the plate against the Orioles’ T.J. McFarland on May 23, 2013, something that had never happened in the history of Major League Baseball occurred: a matchup between a batter wearing #66 against a pitcher wearing #66. A little over a month later, the same thing happened for the first time in the National League when the Dodgers’ Yasiel Puig faced off against the Phillies’ J.C. Ramirez.

Unlike hockey, for example, uniform numbers higher than #60 are rarely issued in baseball. Those issued those numbers in spring training tended to be fringe players or young prospects who would most likely be cut. And most of the ones who actually make the team would opt to change to a lower number, especially position players, who tend to wear lower numbers than pitchers.

That makes #66 a rare number to appear on the back of a major league player’s jersey. A pitcher--and tenor--named "Crooning" Joe Cascarella of the Red Sox wore it for the first time in 1935 (all uniform number information was gathered from Baseball-Reference). Other than Cascarella, only three other players wore the number between 1935 and 1981, one of them being the White Sox’s Gerry Staley, who proudly sported the numbers for six seasons from 1956 to 1961. No one has yet to wear #66 for as many seasons as Staley. During that time, he was the only one in baseball to wear the number. In fact, we have to fast forward to 1981 before there was a season where two different players wore #66 when the Expos’ Bryn Smith and Yankees’ Steve Balboni donned it. Smith dropped the number after 1981, but Balboni wore it through the 1983 season. 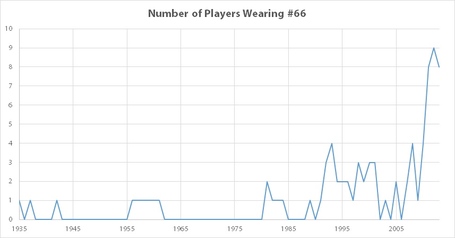 Juan Guzman was perhaps the player most Blue Jays fans associated with the double-sixes before this season. The Jheri-curled hurler had #66 in the Jays’ split lettering on his back from his debut in 1991 until 1995, when he decided to switch to #57 after a difficult season. Even though had it for five seasons, he did not face a single batter during that time who wore #66—five other players wore it between 1991-1995 (Blas Minor, Doug R. Davis, Ben Shelton, Jeff Ballard, and Todd Williams) and three were pitchers, one was a National League player, and another only played one game wearing #66.

Logan Ondrusek, relief pitcher for the Reds, has worn #66 for longer than any active player, having worn it every year since 2010. Incidentally, 2010 also began a big spike in the number of major league players wearing #66. Last season featured the most ever, with nine different players around the league putting it on their backs. So far in 2013, there have been eight players who have worn #66: Ondrusek, Kawsaki, McFarland, Puig, Ramirez, Josh Edgin, Victor Marte, and most recently Drake Britton. 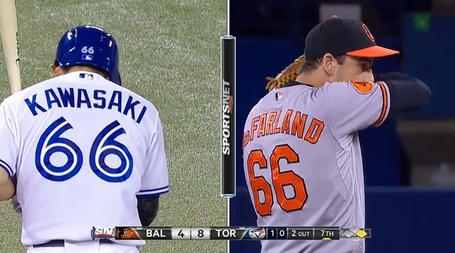 Still, baseball fans had to wait until 2013 before being able to witness a #66 pitching to a #66. That happened in the Rogers Centre on May 23 in the bottom of the seventh inning when Munenori Kawasaki (who switched from #61 this season) faced rookie T.J. McFarland. Kawasaki grounded out to end the inning. Looking back at the footage on MLB.tv, one can see the home plate umpire tossing the first pitch (which was in the dirt) out of play--maybe one day we will see that ball in Cooperstown. Blue Jays colour commentator Pat Tabler mentioned in passing that he has never seen this (a #66 vs #66) matchup before--and he's right, because it has never happened before.

Kawasaki would go 0-for-2 against McFarland in the game. The pair faced each other again exactly a month later, when Kawasaki went 0-for-3.

Interestingly, for something that hadn't happened in the 106-(or so) year history of jersey numbers in the major leagues, another pitcher-batter pair did it just a little over a month after the first event. The Dodgers’ Cuban sensation called Yasiel Puig made his big league debut on June 3, wearing #66. Just 25 games into his career, on June 29, he flew out against J.C. Ramirez, a rookie himself in his third major league game.

That means that batters wearing #66 are now 0-for-4 overall against pitchers wearing #66. Kawasaki and Puig are the only #66-wearing players so far this season, and since Kawasaki is now playing in AAA, Puig carries the burden of getting that first hit. He will get a chance next series against the Reds and Logan Ondrusek. If not then, he might face Victor Marte and the Cardinals in early August, then Josh Edgin and the Mets in mid-August, then Drake Britton and the Red Sox in late August. That is assuming no more roster moves--something that is not always guaranteed, especially for someone wearing #66.