Who Are Ya: Chris Capuano

Share All sharing options for: Who Are Ya: Chris Capuano

Left hander Chris Capuano takes on the Blue Jays today as Toronto tries to win a game for once, that'd be nice. Capuano has always been a main stay at the back end of starting rotations ranging from the Brewers to the Mets to Dodgers. This season Capuano has pitched in 13 games (11 starts) with a 4.63 ERA and a 3.73 FIP, which is actually the best FIP of his career thus far.

The 34-year-old Massachusetts native throws a sinker, slider, changeup combination with his fastball hanging in the high 80's usually. Against right handers, Capuano almost throws exclusively sinkers-changeups, while lefties usually see mainly sinkers and sliders. His changeup has gotten 42.68% whiffs/swing this year, which ranks the pitch among one of the best changeups in the league.

There isn't a whole lot of mystery to Capuano with all of his pitches staying on a pretty flat horizontal plane: 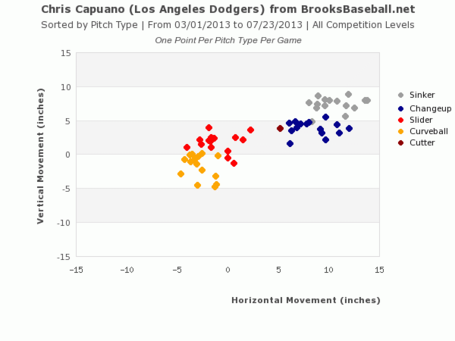 Chris Capuano relies on getting swings and misses down in the zone, with almost all of his whiff/swings coming below the strike zone: 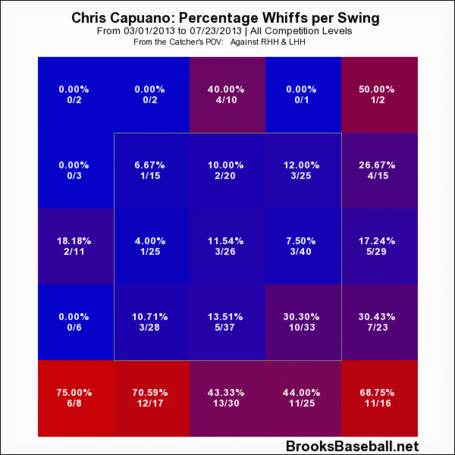 He also is prone to doing some silly things:

Capuano has been tougher on left handers this year, as you would expect. So the lineup today should look like this:

For the "Find the Link" tonight:
Find the link between Chris Capuano and the highest-rated daytime drama of all time in the U.S.A.