Who Are Ya: Jordan Lyles

Share All sharing options for: Who Are Ya: Jordan Lyles

The Blue Jays continue their sweep of the Astros today with the team going up against 22-year-old right hander Jordan Lyles. After being drafted in the first round of the 2008 draft, Lyles has spent three years in the back end of the Astros' rotation. He's never really struck enough guys out to be better than a fourth starter, and many years of being a journeyman big leaguer likely await him. If you're wondering, he becomes a free agent after 2017. If someone wants to confirm that Lyles won't be a Super-Two candidate I'd appreciate it, because I spent about 20 minutes trying to figure it out. In 15 starts this year he has an ERA of 4.78 and a FIP of 3.84, while his K/9 is 6.17.

The South Carolina native throws a fastball, sinker, curveball, changeup, and slider. His hard stuff sits in the low 90's, but he has never been able to get many Whiffs/Swing on any of his pitches, which looks to be his achilles heel. The movement on his fastball, sinker, and changeup are all very similar so trying to pick up the sinker isn't as big of a problem against Lyles as it is for a pitcher with more movement: 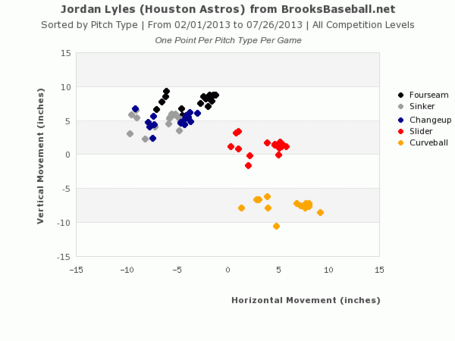 Lyles works on the outside part of the plate against both righties and lefties rarely venturing inside: 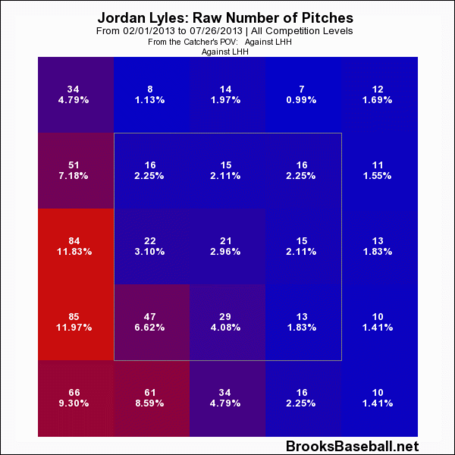 He also sometimes decides not to throw the ball at the end of his delivery:

Before Lyles' last start he actually had an ERA in the low 4's, another start before that it was in the high 3's, so the season hasn't been as bad as his line suggests. That being said, five days ago against Seattle, Lyles gave up 9 earned runs in 4 innings! That's a Blue Jays-esque type of blowup. In that game, 8 of the 9 Mariners' hitters were batting left-handed and combined with Lyles' career splits that support that decision, the Blue Jays should try to stack the lineup card with lefties.

The lineup I'd suggest would be:

Find the link between Jordan Lyles and one of the pitchers' sandwiched between A.J. Burnett and Roy Halladay on the all-time strikeout list, whose career spanned 20 years!

Here's the current standings for "Find the Link":