Who Are Ya: Jarred Cosart

Share All sharing options for: Who Are Ya: Jarred Cosart

The Astros try to salvage a split today as 23-year-old Jared Cosart goes up against Todd Redmond. The Phillies drafted Cosart in the 38th round of the 2008, but he only fell that far because of a strong commitment to the University of Missouri. Instead he chose to sign for $550,000. The Texas native was one of the prospects that the Astros fleeced from the Phillies in exchange for 155 games of Hunter Pence. Cosart made his debut 16 days ago pitching an eight inning two-hit shutout in Tampa Bay. He followed that up with seven strong innings in Oakland allowing only one earned run on 115 pitches.

John Sickels had a look at Jarred Cosart early in the season, so take a look at that first of all. He throws a fastball, cutter, curveball, and changeup with his hard stuff sitting mid-90's. His tight curveball has some serious drop to it. 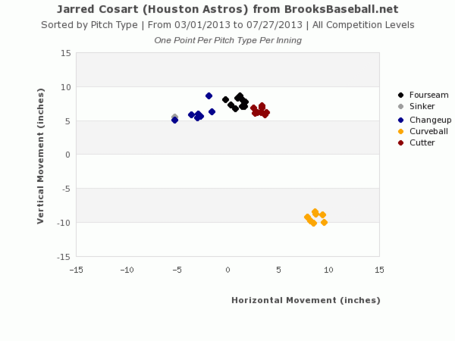 His groundball rate in the two starts is 57.1% and it's not a sample size trick. Cosart's fastball has some sink and he pounds the bottom of the zone with all his pitches (pound down?): 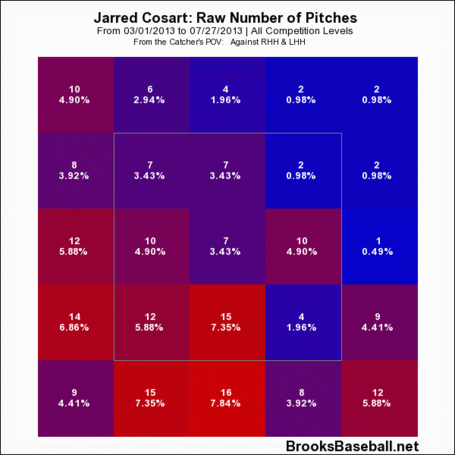 In his 15 big league innings, Cosart has only recorded 6 strikeouts, while also issuing 6 free passes. The command and control have been an issue for him, although the strikeouts should come up a bit because his K/9 was between 7.00 and 9.00 in the minors the past couple of years. Watching Cosart pitch should be fun and must be a bright spot in an otherwise tough season for Houston's fans, but hey at least they have bright spots. He's going to throw a lot of hard stuff, it's going to be fast and he's going to be dominant, as you've likely realized. 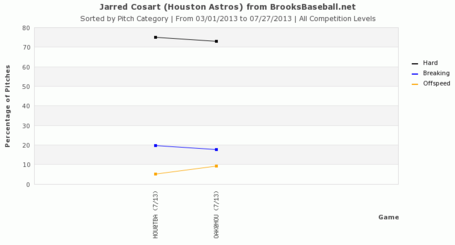 The lineup I'd like to see would look like this (I think Melky batting 2nd is a thing now):

For the "Find the Link":
Find the link between Jarred Cosart and a player currently in A ball that might possibly patrol the ground at Busch Stadium that Colby Rasmus used to roam for the Cardinals.

This is probably going to go poorly.