My analysis: Jose Reyes is struggling because his RBIs are lower than his OPS.

One thing that annoys me more about Sportsnet broadcasts than "Stadium Love", Pat Tabler, and Gregg Zaun is their recent love affair with arbitrary bar graphs. Bar graphs are useful to visually compare relative amount of things, like maybe the number of home runs by each team in the league. An example of an appropriate (but perhaps not very useful) application of bar graphs is in the scouting report for starter Todd Redmond. Below you can see visually that left-handed batters have a batting average around a third lower than righties: 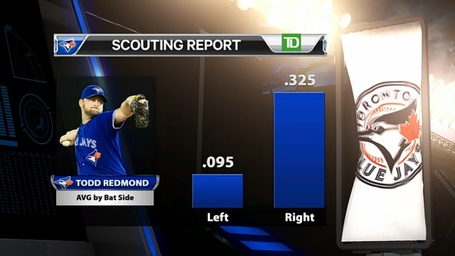 It is not useful for things like percentage of different pitches in a pitcher's arsenal, because pie charts are much better at visually depicting the distribution, although it is not necessarily incorrect to use a bar graph for that. I remember they showed that somewhere in Sunday's broadcast but I couldn't find it.

But in the bottom of the second in the game, Sportsnet put out the following bar graph before Jose Reyes' at bat (big shout out to @EricHartman and @ScottJohnson48 for tweeting it out when I was at the game): 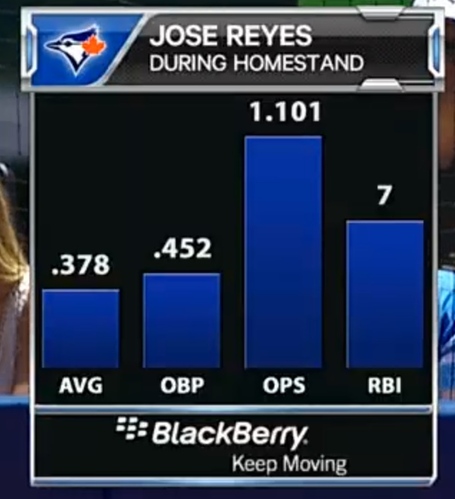 It attempts to use a bar graph to compare four statistics THAT HAVE COMPLETELY DIFFERENT UNITS! What is it telling me visually? That Jose Reyes' OPS is higher than his OBP, which in turn is higher than his AVG. WHICH IS PROBABLY TRUE FOR 99.999999999999999999999% OF PLAYERS IN MLB HISTORY (for a player to have an OBP lower than his AVG, he must have more sacrifice flies than the sum of his walks and hit by pitches, which is very rare for players who has had significant number of plate appearances). In case you didn't know, OPS stands for "on base plus slugging", a simple and useful quick statistic about a player's overall hitting prowess, and it is calculated by (surprise!) adding a player's on base percentage with his slugging. Since one cannot have negative slugging, OPS CANNOT POSSIBLY BE LOWER THAN OBP.

And then, even more insanely, among the three rate statistics, they included RUNS BATTED IN, WHICH IS A FRIGGIN COUNTING STATISTIC. And for an unknown reason, SOMEONE DECIDED THAT 7 IS SOMEWHERE IN BETWEEN 0.452 AND 1.101!!!!

I can see the pre-game production meeting going as such: 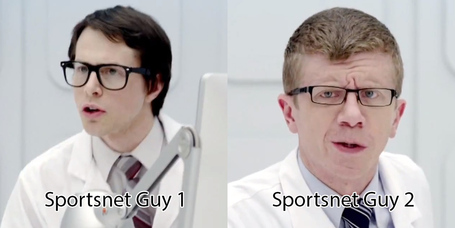 Sportsnet Guy 1: Guys, we're wearing lab coats and glasses, I think we need to do something more scientific for baseball broadcasts. But what can we do? Maybe putting the lineup on some sort of periodic table?

Sportsnet Guy 2: No, no, maybe something easier. Hey! You know that $50,000 graphics program we paid for? I'm sure it has a function to make bar graphs!

Sportsnet Guy 1: Oh, boy, it does! /scurries off to work on something

Sportsnet Guy 2: Oh cool, but I think there is something wrong with that graph that I remember from grade 5 math. The bar for his RBIs is too tall, can you make it shorter to fit in to the graphic?

Sportsnet Guy 1: Maybe Judy will finally go out with me now!

You know, for a couple of guys who are dressed up as a stereotypical scientist, those two dudes are horrible at making graphs.

At least, in the two examples above, the height of the bars are correct in proportion to each other (if we disregard the 7 RBIs), which is what bar graphs should be. A couple of months ago, Sportsnet showed this graph to demonstrate R.A. Dickey's loss of velocity (technically we should be using the word speed as velocity is a vector value but I digress), using ARBITRARY BAR HEIGHTS! I guess you can say they've... improved?

So, Rogers Sportsnet, it is OK that you suck at making graphs. Everyone has weaknesses. There is a reason why I don't play the infield in softball. So why don't you be more like Comcast Sportsnet, who broadcasts the Houston Astros games, and farm your statistical work out to bloggers, like our friends at Crawfish Boxes? 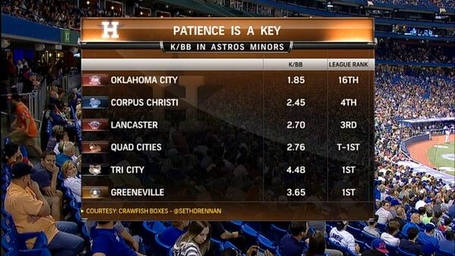 Blue Jays Still In Good Shape For 2014 - GAMEREAX
Chris Toman reviews all that has gone wrong so far in 2013, but thinks that this squad in all likelihood would not be horrible in 2014. In terms of moves, what would you do with Josh Johnson and Adam Lind? My thoughts is to pick up Lind's option--yes $7 million is a lot to pay for a platoon first baseman / designated hitter, but $2 million is a lot to pay him to play for someone else. Josh Johnson is a tougher call, but I have to believe that he will not keep pitching this badly forever. Since the Blue Jays would have to pay him at least $14 million or so to get a compensation draft pick anyway, I'd offer him an extension of $14 million + a $16 million club option for 2015 with a $1 million buy out. I think it is worth the risk, but then again it's not my job on the line (unless Tom fires me).

Colby Rasmus the hero as Blue Jays down Astros - Toronto Star
Brendan Kennedy's recap of Sunday's victory features some great quotes from Colby Rasmus about how he has changed his approach following bad games, thanks to John Gibbons' advice to stay cool and enjoy the game. My favourite part, tough, is Kennedy's description of Colby, who was "staring expressionless into the TV cameras." He also explains why the umpires had to review the almost-home run hit by Edwin Encarnacion. The Rogers Centre's outfield is very simple and symmetric, and the outfield stands are well removed from the wall, so generally it is very easy to make home run calls--before Sunday, I don't ever recall any dispute having happened.

Despite Jays' failings, media loves John Gibbons - Toronto Sun
John Gibbons may be popular with the media--and around these parts--but there is a segment of the fanbase that cannot stand him. I was listening to George Rusic's call-in show on the FAN 590 on Sunday afternoon, and many callers expressed their desire for Gibby to be fired. They want to see a manager who is "tougher" and one who would "shake things up in the clubhouse." Oh also, take a read through that article's comments, then take a couple of Tylenols.

Tough Trade Deadline calls in store for Blue Jays general manager Alex Anthopoulos - bluejays.com
Alex Anthopoulos tells Gregor Chisholm that he has received calls for relief help, but it is difficult to deal relievers in a one-for-one trade, so it's easier to put them in a larger package. One can recall the Colby Rasmus trade where several relievers were dealt.

Bautista: I need to stay in games - Sportsnet.ca (VIDEO)
Well, at least Jose Bautista is self-aware (and can self-censor), saying, "what I need to do is to stay in the games."

JA Happ Rehab In Buffalo - OK Blue Jays
J.A. Happ says that baseball should look at head protection for pitchers, but that he hasn't seen any prototypes or samples. Happ made a rehab start with Buffalo Sunday night and he wasn't good, giving up six runs on eight hits and three walks, striking out four against the Toledo Mud Hens. However, he did reach his goal of 90 pitches (threw 92, 56 for strikes). There was talk of the Blue Jays bringing him back after this rehab start, but I think he's got another AAA appearance in him.

Adam Lind's back pain is back - Toronto Sun
Mike Rutsey's nearly point-form piece in the Sun reviews some of the aches and pains hitting the Blue Jays squad. Jose Bautista has a left Achilles problem, and Adam Lind has a flare up from his recurring back issue.

Blue Jays’ walk-off victory has something for everyone -Toronto Star
Rosie DiManno offers a great lesson to writers about how easy it is to string together quotes (and make fun of Edwin Encarnacion's accent) to make a column.

Now lobbying can begin for Howarth - Canadian Baseball Network
I don't think it is too early to start campaigning for Jerry Howarth to get the Ford C. Frick Award after seeing it take almost a decade to get Tom Cheek in. Jerry has, humbly, asked Mike Wilner not to lead the campaign, so fellow Jays fans, it's up to us!

Albert Pujols injury: Angels 1B could be out for year - SBNation.com
Albert Pujols, who the Angels still owe $212 million from 2014-2021, will be gone up to a year with a torn plantar fascia (the same tissue Dustin McGowan had inflammed right after signing his contract extension in spring training 2012). The Angels also owe $98 million to Josh Hamilton. I bet they can't wait for Tony Reagins to find a GM job somewhere else.

MLB bans in PED case likely to drop this week; A-Rod's could keep him out until 2015 - New York Post
Joel Sherman and Ken Davidoff have heard that Major League Baseball will suspend a bunch of players linked to the Biogenesis scandal some time this week. The article, understandably, is focused on Alex Rodriguez, but the Blue Jays' Melky Cabrera could also be punished for his involvement.

Martinez recalls perfect game in L.A. - Sportsnet.ca (VIDEO)
Arash Madani sits down with Houston Astros bullpen coach and former Montreal Expos pitcher Dennis Martinez about his perfect game, which happened 22 years ago this past Sunday. Martinez speaks about the impact his game had on Canada and his native Nicaragua, and professes his disappointment that there isn't a baseball team in Montreal. Vous pouvez regarder des parties du match parfait ici (en français).

Papelbon: Phillies need changes from top, down - Phillies.com
"I definitely didn't come here for this," our favourite mouth breather Jonathan Papelbon said. Does anyone feel sorry for him?

Texas Rangers pitcher sucker-punched in Cleveland, police say no big deal (updated) - Scene and Heard
This weekend, it was reported that Rangers pitcher Tanner Scheppers was punched in the face as he was innocently walking down a Cleveland street. However, it may be that he truth is a little less innocent, according to witnesses and a Cleveland Police statement.