Who Are Ya: Max Scherzer

Share All sharing options for: Who Are Ya: Max Scherzer

Max Scherzer takes on the Blue Jays for the first time this season, going up against Josh Johnson. All the buzz about Scherzer is that he's the first pitcher to go 12-0 since some guy did it a few decades ago. Thankfully, Scherzer realizes wins are a load of crap, which Jon Morosi turns into a sabermetric debate obviously. You can read the fine piece of journalism here. For a more interesting read, this piece focuses on how Scherzer learned the value of advanced stats from his brother before he committed suicide. Aside from the good fortune of getting decisions, Scherzer has also pitched very well sporting an ERA of 3.10 and a FIP of 2.69 with a K/9 of 10.69. Fun fact that's not so fun: Max Scherzer and J.P. Arencibia have about the same K% rate of a little over 30%.

Max Scherzer throws the four conventional pitches with the fastball-changeup combination featuring against left handers and the fastball-slider combination against right handers. His slider has got nearly 50% whiffs/swing this season, while his changeup is getting over 60% groundballs/BIP.

He can also run his fastball up close to triple digits when he has to:

You can see that Scherzer really attacks the arm-side of the zone against both right handers and left handers rarely venturing to the glove-side of the plate: 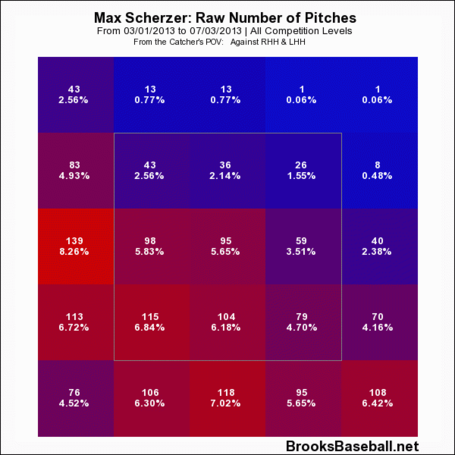 He also locates the changeup against lefties down and away, which is why the pitch has such a high groundball rate: 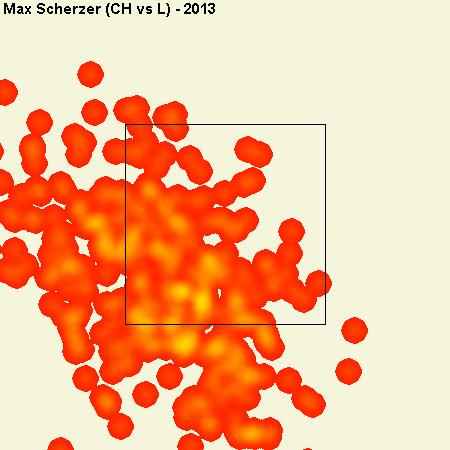 The times Scherzer has struggled this year, it's usually been in part because he allowed a few walks so the Blue Jays will have to hope he lacks his command tonight, which has been a rare occurrence this year.

Adam Lind could still be hurt so it's tough to say if he'll play but Scherzer has faced many more lefties (270) than righties (150) this year and has struggled more against them. Ideally, the Blue Jays should try to stack the lineup with left handed hitters, but the bench doesn't provide much flexibility right now. My hopeful lineup would be:

For the "Find the Link" today:
Find the link between Max Scherzer and the namesake of Alexandria, Egypt.

Enjoy the game tonight, might be a pitcher's duel.