Who Are Ya: Dan Straily

Share All sharing options for: Who Are Ya: Dan Straily

Dan Straily goes up against a Blue Jays pitcher tonight (after closer inspection it's Mark Buehrle, at least it'll be fast). Straily is a 24-year-old right hander who is in his second year in the big leagues. He has an ERA of 4.43 and a FIP of 3.65 with nothing much jumping out when taking a glance at his peripherals. In his four starts in July so far, he has an ERA of 2.92.

Straily throws a fastball, sinker, changeup, slider, and curveball with his hard stuff hanging in the low 90's. Against right handed batters he reverts to a fairly strict fastball-slider combination, made possible by the fact that his slider is his best off-speed pitch. His changeup has a pretty big drop in vertical movement to it, so it definitely looks a little different from his hard stuff which could explain why it hasn't been too successful for Straily. 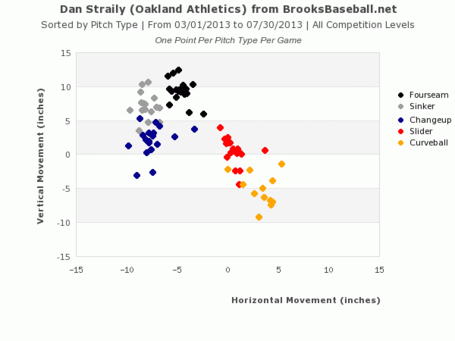 As you can imagine, Straily hangs around the outside of the plate with his slider trying to get whiffs and weak contact. Hitting the down and away corner of the strike zone for Straily is key because his pure stuff doesn't blow hitters away: 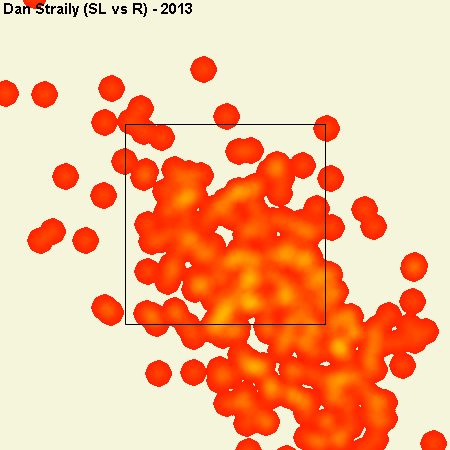 Overall, Straily still hasn't hit his stride as a big leaguer with the young righty giving up too many home runs last year, while having a low BABIP opposed to this season where his strand rate has been pretty low leading to his ERA under-performing his FIP. When Straily finally settles down with the Athletics, he should be a solid middle of the rotation pitcher who eats innings and performs consistently.

Lefties have hit Straily much better in his career than same handed batters, so the lineup I'd like tonight would be:

For the extremely tough "Find the Link" today you have until 9:30 before I give a hint:

Find the link between Dan Straily and the tennis player who won 3 Grand Slams in 1988.

Enjoy the game tonight or your sleep and sanity.