Share All sharing options for: Melky Cabrera not in the Blue Jays starting lineup and here's the reason why

Melky Cabrera is not in the Blue Jays starting lineup and here's the reason why: HE CANNOT RUN. Or he's being traded, but I don't think anyone would want him, really. He looked pretty pathetic jogging after a Yoenis Cespedes gapper last night, turning it into a triple. If he keeps looking as bad as he did last night, the Jays might be served best placing him on the disabled list for a while. Maybe they'll do that when (or if?) they activate Sergio Santos (deadline to decide whether to activate him is this Friday, I believe).

Maicer Izturis will be batting in the second spot, something that he hadn't done all year even though he was slotted there 13 times last season. Izturis has really turned it around since his horrid start. Arbitrarily, since June 1 he is hitting .275/.337/.356. Not what one would want to see from a second hitter, but meh, the Blue Jays have better things to worry about. It's really too bad that John Gibbons has ended is experiment with batting Jose Bautista second.

Emilio Bonifacio emerges from the woods and will be making his first start since the last game against the Orioles before the All-Star Break, earning it after batting 1.000/1.000/1.500 since the break in two at bats. According to Ken Rosenthal, the Blue Jays are trying to move him, although I have no idea what kind of player they will get back. Probably a small amount of cash, or a fictional low-A player.

Adam Lind is still DHing, which may hint that his back is still problematic. Not playing the field allows Lind to do things like work on his best Gibby-hand-in-pants impression. (Protip: leave pants fastened) 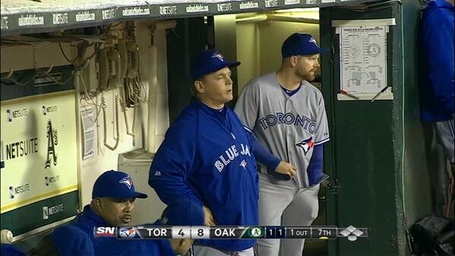