Who Are Ya: Bartolo Colon

Share All sharing options for: Who Are Ya: Bartolo Colon

In an afternoon game today in Oakland 40-year-old Bartolo Colon takes on 38-year-old R.A. Dickey. You would think with both guys having so much service time in the big leagues that they would have faced each other a bunch of times, well you'd be wrong. Colon has been good again this year after being suspended last season for PEDs, but won't be punished again for his involvement in the Biogenesis scandal since he has already served his time, like Melky Cabrera. Colon has a 2.54 ERA and a 3.25 FIP with an xFIP of 4.02 due to his nice spacious home ballpark. Both his K/9 and BB/9 are extremely low with his strikeouts at a rate of 4.89 K/9 and his BB/9 at 1.14. His win-loss record of 14-3 has made the people who care about those things pretty excited, but regardless of that Colon has been very good this year for a bargain of $3 million. The last couple years Colon has followed the same strategy of keeping the ball in the huge Oakland ballpark and not walking anyone.

Bartolo throws a four-seamer, sinker, changeup, and slider with his hard stuff still hanging in the low 90's a mere 16 years after his debut in the major leagues. Colon has been getting his whiffs on the outside of the plate against righties mainly with his slider: 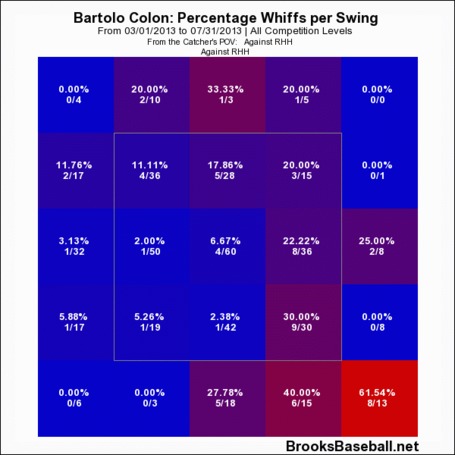 I think this could be a good match-up for the Blue Jays as Toronto's hitters are good fastball hitters and Colon has thrown a whole lot of hard stuff in his starts this year: 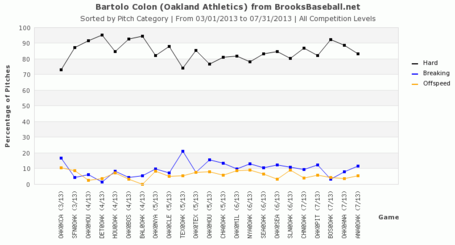 Lefties are slightly better against Colon than righties so the lineup I'd like to see this afternoon would be:

As an aside, today is an afternoon game even though the Blue Jays play a few hours down the coast tomorrow nightin Anaheim and Oakland gets a day off before continuing their home stand. It doesn't make a whole lot of sense why this game must be played at 12:35 local time.
Yesterday no one was able to find the link that the city where Dan Straily grew up in Oregon is sister cities with Mats Wilander's hometown. That means today is worth double points in "Find the Link" with expos&nordiques4ever only 3 points behind getupkid after yesterday's half-point! Double the points means double the difficulty:
Find the link between Bartolo Colon and the avenger of the Roman Empire's slaughter at the "Battle of the Teutoburg Forest".
Enjoy the interesting pitching match-up today. I only get to watch the game if it rains this afternoon so I'm currently doing the rain dance.