Who Are Ya: Mike Pelfrey

Share All sharing options for: Who Are Ya: Mike Pelfrey

Mike Pelfrey goes for the Twins today trying to turn around an awful season for him so far. He's coming off the 15-day DL with back problems to make the start this afternoon. In 14 starts he has a 6.11 ERA and a 4.22 FIP. His K/9 is only 4.84 while his BB/9 is 2.67 continuing his contact pitching ways. Pelfrey is a free agent after this season, so he'll be hoping to change his fortunes in the second half of the season or he won't get a very big contract at year's end.

Pelfrey throws the 5 main pitches, with the fastball and sinker making up 72% of his repertoire this year with the speed averaging about 92 MPH. None of Pelfrey's off-speed offerings this year have been very good, which may be why he's struggling so much.

His sinker is often thrown on the inside against right handers trying to jam them in on the hands: 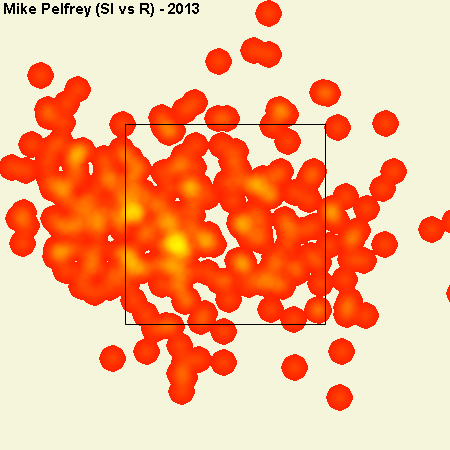 In fact most of Pelfrey's pitches have had that location this season, which makes him a little bit predictable for hitters: 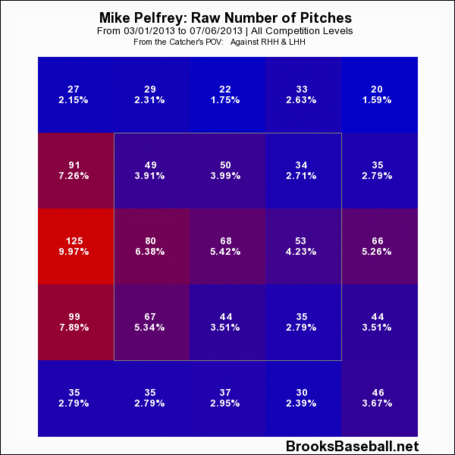 Here's the hopeful lineup for today:

For the "Find the Link" today:
Find the link between Mike Pelfrey and the starting left fielder of the defending American League representatives in the World Series.

Enjoy the game, hopefully the Blue Jays play well because Pelfrey is not the most interesting pitcher.