Who Are Ya: Ubaldo Jimenez

Share All sharing options for: Who Are Ya: Ubaldo Jimenez

The Cleveland Indians welcome Toronto to Progressive Field today as Ubaldo Jimenez goes up against Josh Johnson. Jimenez faced the Blue Jays in the second game of the season when things were still so fresh and new, unfortunately that feeling has faded. In that appearance he went 6 innings allowing 1 run on 3 hits, with the only damage being done by Maicer Izturis' homerun in the third inning.

This season Jimenez has performed pretty poorly pitching to a 4.67 ERA, which is backed up by a 4.68 FIP. Although he has a career high strikeout rate of 8.93 K/9, he also has a career high walk rate of 4.97. He's been a mixed bag this year, but has not finished 6 innings since June 1st, which was seven starts ago. His control has killed him as close to a walk per inning has been commonplace in the past month's worth of starts.

Judging by this graph, when Jimenez loses feel for his fastball and sinker, he starts leaning heavily on his slider which becomes predictable after throwing it as the first pitch 41% of the time against right handers: 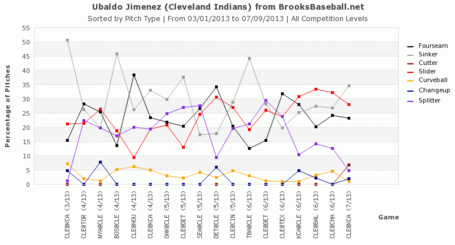 When Jimenez was successful back in Colorado, his slider was lower in the zone than this year where it's been elevated too often: 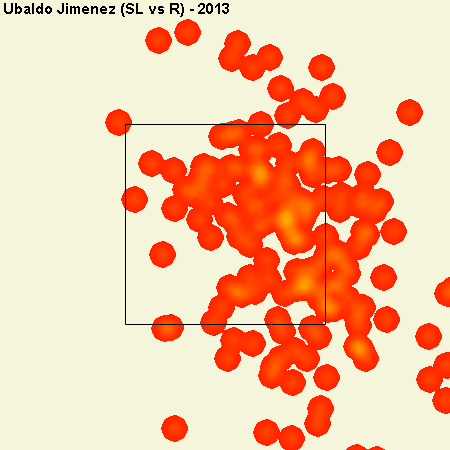 The lineup I'd like to see today would be:

For the "Find the Link" on this Tuesday:
Find the link between Ubaldo Jimenez and the LA Dodger who has been on and off the DL this year with left shoulder problems.
This series is pretty important heading into the All-Star Break in a few days and the Blue Jays will be looking to win at least two out of three games to give them some hope going into the second half.