Who Are Ya: Garrett Richards

Share All sharing options for: Who Are Ya: Garrett Richards

At the beginning of the season I was writing these the day before the games and now I'm writing them a few hours before first pitch, how the mighty have fallen... Anyway, Garrett Richards is going up against Josh Johnson tonight as the Blue Jays try to spark a magical run that vaults them into...fourth place in the AL East. Richards is a 25-year-old righty who was a 1st round supplemental pick by the Angels in 2009. He's been a spot starter since he made his debut in 2011, always hanging mid-4.00's with his ERA and FIP. He's a solid versatile pitcher who can be a setup guy, a starter when need be and sometimes a closer.

Richards is a fastball, sinker, slider pitcher who hangs in the mid-90's with his explosive fastball. His slider is a true plus pitch that has gotten nearly 40% Whiffs/Swing this year. As you can see Richards' sinker doesn't really sink and his slider doesn't do a whole lot of sliding: 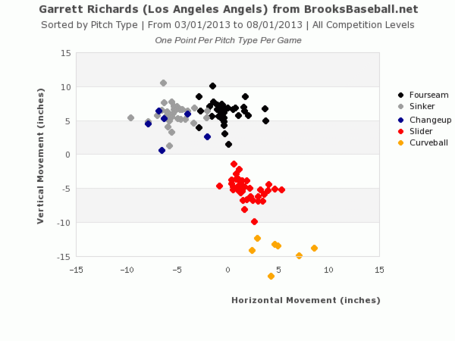 Richards' splits are pretty neutral so the Blue Jays should field the best line-up possible:

Find the link between Garrett Richards and the 79 point man from the most recent Tampa Bay Lightning Stanley Cup season.