Who Are Ya: A.J. Griffin

Share All sharing options for: Who Are Ya: A.J. Griffin

A.J. Griffin takes on R.A. Dickey today in a battle of initial first names. Griffin has a 3.91 ERA and a 4.61 FIP in 23 starts this year, his first full season in the major leagues. Griffin has a fantastic BB/9 of 1.95 although he has a 1.71 HR/9, which accounts for his slightly higher FIP, not to mention a BABIP of .241 bringing his ERA down.

Griffin throws a fastball, slider, curveball, and changeup with his hard stuff hanging in the high 80's and his slow loopy curveball averaging in the high 60's. None of Griffin's off-speed pitches are very dominant, but his curveball is certainly GIF-able: 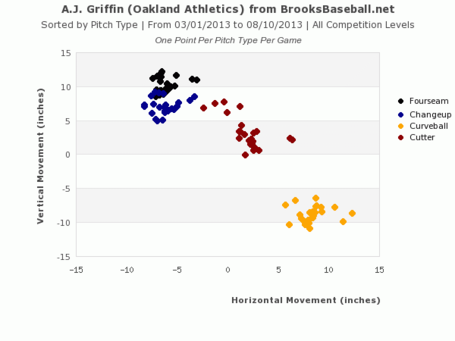 Griffin isn't very exciting to read about, but he has great command and is fairly consistent. He's in his first year of full service time, meaning he is another of the many Oakland starters who will be with the team for multiple years to come. Griffin is slightly better against left handed hitters so the lineup I'd like to see would be:

For the "Find the Link" today:
Find the link between A.J. Griffin and the NFL quarterback who passed for the most yards in the 2004 season.