About a week ago jays182 asked whether the Jays would be better off if they tanking the rest of year and getting a high draft pick next year, or going on a run and finishing the year strong even if it makes essentially zero difference in terms of the playoffs.

I didn't weigh in at the time, because frankly like most I'm not sure I really care too much at this point. Things that drove me nuts in April or May elicit merely profound indifference and ambivalence now. And anyway, the major points were covered by others: a high draft pick is nice; but with an expensive veteran roster with a lot of pieces locked in for the next 2 years, it would be far better to see improvement/regression from players who have struggled. Winning probably helps revenues to some extent, and plus it's more fun to watch good/winning baseball than losing/bad baseball. And draft picks in baseball take a lot longer to have impact than in other sports, and are more hit and miss.

Last year it was much easier to be sanguine about losing: the promised future was still firmly in front. Not so now. But I've been thinking about the above proposition for a while, and a fair bit the last couple days, and I think the dichotomy above is wrong. It's not about boom or bust for the rest of 2013, and which is better. It's really about either of them being far preferable than the middle ground of being mediocre for the rest of 2013. Avoiding being .500 the rest of the way is the most critical thing, and below I'll show why.

More and more, baseball is about drafting, developing, and retaining homegrown stars. Even the small markets now have the money to lockdown their franchise players long-term and keep them off the free agent market: Evan Longoria (TB), Andrew McCutchen (PIT), Joey Votto (CIN), Joe Mauer (MIN). Increasingly, the only way to get players of this calibre is through the draft, and for the most part, towards the top of the draft. It's possible to get them later, but the odds are much better higher up.

Normally, winning a few more games does not greatly impact draft position: for the most part, the distribution of W-L records (and therefore of draft position) is pretty linear. For example, 2012: 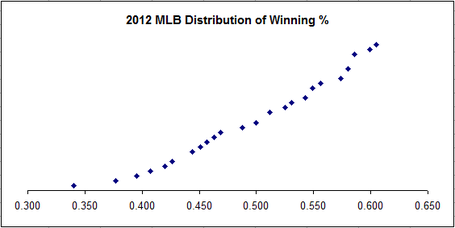 It flattens out among the very worst teams, but other than that is a remarkably linear progression (the vertical axis is just a simple rank of 1 to 30 in terms of record). 2011 is a little bumpier but has basically the same story: 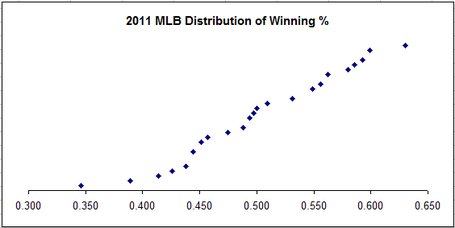 So basically, to move up significantly in draft position, a team had to do quite a bit of losing, which is normally not a good trade-off. Additionally, the 2012 and 2013 drafts were considered pretty weak, which diminishes the playoff.

What about 2013? Well, it turns out the distribution is quite different (as of Friday night): 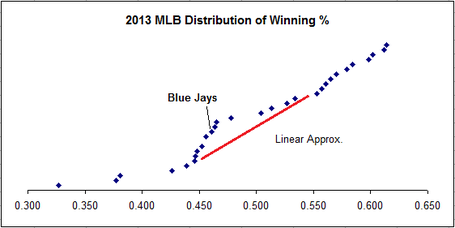 Basically, there's 11 really good teams playing above .550. In the AL, one of those guys is going to miss playoffs, so unless one collapses without another moving up, someone's going to get screwed (cough, Farrell & Red Sox, cough). Then there's a gap, and 4 more good but not great teams above .500. Then another big gap, and then a mass of 9 teams around .450, roughly 8 to 11 games below .500. And you can see the Jays are right in the thick of it.

Now, there's no guarantee it stays like this, and maybe it flattens out more in line with 2011 and 2012. But basically, right now there's very little separating the #5 draft position from the #14 draft position. And that's the crux of the difference between Outcome B and Outcome C. Most years, it might be the difference between drafting 8th and 12th. The stakes appear to be much larger this year. Additionally, the 2014 draft appears to be quite strong 10 months out, especially relative to the last couple years. So while finishing .470 overall compared to .444 probably has some benefit in the short run, given the potential costs my view is in the long term sucking for 45 games beats mediocrity.

Of course, knowing how things have gone for the Jays, they'll probably end up going .500 (give or take a game or two) the rest of the way. Achieving the least beneficial outcome seems to be the theme for the last calendar year or so. A bit more rationally, Fangraphs has them projected for a 24-22 rest of season record (before Sunday's game) - the talent is there to be good, even given the wreckage of 2013.

So by all means, hope the Jays finish really strong. But if they're not going to finish strong, then the best possible outcome is probably tankage.