Brett Lawrie was not having a productive 2013 season until lately, when he made some changes.

Brett Lawrie was not good to start the 2013 season. He was in fact quite awful, putting up a .179/.240/.337 slash line with a 25% strike out rate and a 6.7% walk rate through his first 25 games. Lawrie appeared to be hurt, however, and this shifted a bit of the fanbase's blame for his poor play towards the organization's handling of Lawrie. He was rushed! That's why he was so bad!

Granted, yes, Lawrie most likely should not have been up so quickly back in April after missing a large portion of spring training, but the team was struggling and was regularly playing either Mark DeRosa or Maicer Izturis at third base. It was clear that they badly missed Lawrie's defensive abilities at third.

Lawrie then injured himself again on May 27 as he slid in to second on a stolen base. Lawrie was starting to turn it around a bit at this point, when his year-to-date slash line was at .209/.268/.374, with his strikeout rate having dropped a tad to 23.5% and walk rate at 5.9%.

Lawrie would return from his second injury on July 13, and continue to fail to put up quality offensive numbers. Then, at some point after the All-Star break, Lawrie turned it around and started hitting really, really well. Perhaps the time off during the All-Star break allowed Lawrie to work through some things? Perhaps he just started having baseballs land in play? His BABIP in the first half was .234, so maybe that accounted for the change?

I believe a big shift came when Lawrie changed his stance for good after the July 26 game against the Houston Astros. For starters, here is Lawrie's swing at the start of the year--his sixth game--against the New York Yankees on April 21.

Here, Lawrie was very low to the ground and had a lot of moving parts to his swing. His hands move a fair bit and he seemed to tap his front foot before planting. I've never played ball so I have no idea how this affects the swing--I'm merely writing down what I see.

Here is a still of his stance. 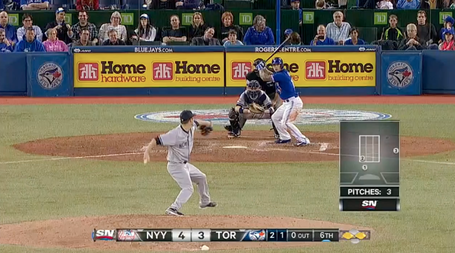 Towards the end of July, Lawrie started to make a bit of a change to his approach.

Here he is on July 21, standing very much like he did in that April 21 game. 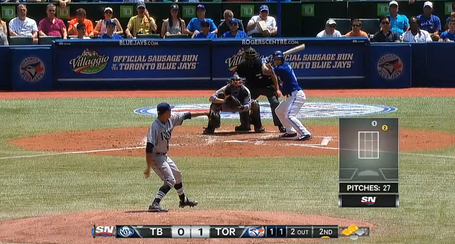 Now, he begins to stand a bit more upright in this game on July 24. 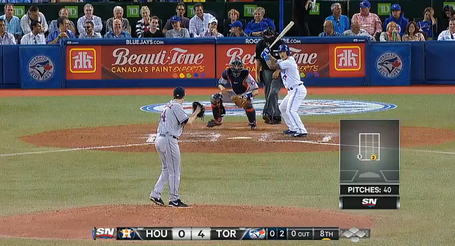 Finally, on July 27 he gets to be where he is now--standing nearly completely upright, with a slight bend in the knee. 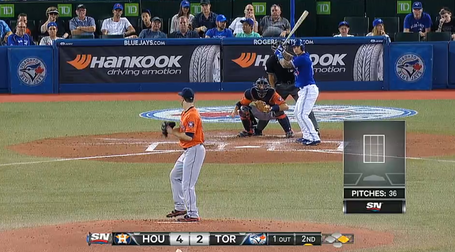 Here is his same stance and swing a bit later on, on August 11. Notice the hands and head still move a fair bit, but the leg kick seems to be a bit shorter.

Another interesting note is that Lawrie's plate coverage is much improved within the last 10 games. 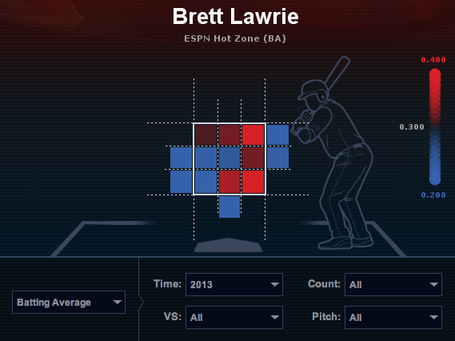 And now the last ten games. 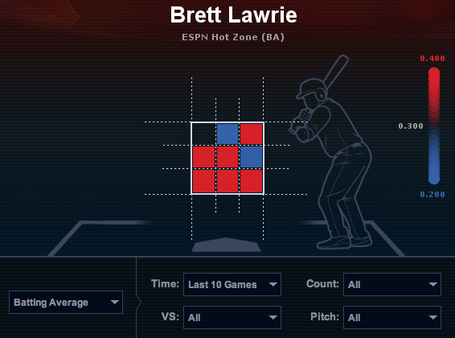 You can see that prior to making the change, Lawrie's outer plate coverage was quite bad, and most of his hits would come from pitches on the inside portion of the strike zone.

There is no way that Lawrie can keep up the ridiculous pace he is on right now, as he is boosted by a BABIP of .393 in these past 18 games, but it's interesting to note the difference a swing change can possibly make. Of course, Lawrie could perhaps just finally be completely healthy.

Let's hope that these changes have lasting effects and Lawrie doesn't revert to his early 2013 ways. It would be nice see what Lawrie is capable of offensively over a prolonged period of time.