Who Are Ya: Jake Peavy

Share All sharing options for: Who Are Ya: Jake Peavy

Rubber match tonight as Boston and Toronto have split the first two games of the series. Deadline acquistion Jake Peavy goes to the hill for the Red Sox, while Mark Buehrle goes for the Blue Jays. Peavy started 13 games for the Chicago White Sox before being moved the day before the trade deadline in a three team deal that included the Red Sox sending infielder Jose Iglesias to Detroit. In Chicago, Peavy had an ERA of 4.28 and a great K/BB of 4.47. After moving to Fenway Park, Peavy has had two starts that totalled 12 innings with eight earned runs allowed. His last start against Kansas City was awful with Peavy allowing five runs off ten hits and recording zero strikeouts. His full season ERA now stands at 4.50, while his FIP is 4.32. Peavy has lost velocity since his dominant years and has become an extreme fly ball pitcher with a 34% GB rate this season.

Peavy has manly thrown a fastball, sinker, changeup, cutter, and curveball this season with his fastballs sitting low 90's on the radar gun. None of his off-speed pitches have been great this year and the 32-year-old Alabama native has relied on his sinker to get him out of tough spots. You can see the movement he gets on his pitches here: 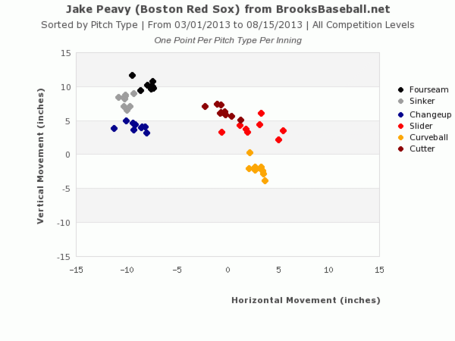 Peavy has become a smarter pitcher since he was able to simply blow guys away earlier in his career with San Diego and you can see he locates down and away consistently against right handed hitters: 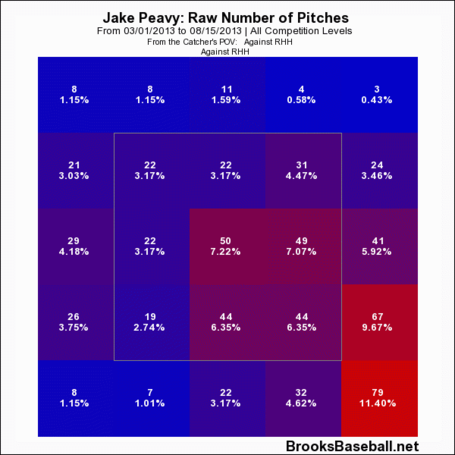 That chart makes sense because Peavy's breaking pitches have hard movement away from right handers.

The lineup for today should probably be:

For the first "Find the Link" this week:
Find the link between Jake Peavy and the solider that Joseph Mazzello plays in HBO's "The Pacific".
Hopefully there's a series win in store tonight.