Appreciating platoons and the teams that do it well

Platoons are a big part of the game of baseball. Which teams do it well, and how can the Blue Jays improve?

Share All sharing options for: Appreciating platoons and the teams that do it well

Teams with limited financial flexibility often have to find alternate ways to be successful. While the large- and medium-market teams can spend to contend, small-market teams such as the Tampa Bay Rays, Oakland Athletics, and Pittsburgh Pirates (to an extent) must attempt to stay ahead of the curve by finding new ways to win.

The Oakland Athletics of the early 2000s, as most know, began looking more at stats as opposed to traditional scouting means. The Tampa Bay Rays brought in Wall Street executives for an outside perspective on the baseball and business operation of the team. Recently, to a much lesser extent, the Blue Jays brought in Jamie Evans and his weighted-ball training program for pitchers - a program that has worked so well in the past.

This isn't to say that platooning is a new thing at all, or even some outlandish tactic that only few teams are attempting to use. It's a legitimate strategy implemented by many teams in order to get the most out of players.

From page 173 of The Book: Playing the Percentages in Baseball:

Platooning is an effective way of increasing a team's offensive output. A platoon featuring a lefty and righty with comparable skills (offensively and defensively) and average platoon splits will win about one extra game per season. If one or both platoon players have an unusually large platoon split, you will gain more than a win per season.

That being said, let's take a look at an example from each of the three teams mentioned above - the Pirates, the Athletics and the Rays. Small sample size alert for much of this, beware.

The Pirates - First Base

The Pirates have been using a combination of Gaby Sanchez and Garrett Jones at first base for the majority of the year.

Here are their splits against righties (all stats via Baseball-Reference and Fangraphs):

You can see that in playing Sanchez vs lefties and Jones vs righties, you end up essentially turning two players with large platoon splits in to one player who is great against both-handed pitchers without losing bench flexibility. The Pirates now have a first baseman who can hit to the tune of a .428 wOBA vs lefties and a .331 wOBA vs righties.

The Athletics - First Base

Like the Pirates, the Athletics also have a platoon at first base (as well as in left field, catcher, second base...). The Athletics are easily one of the best teams in the league at utilizing platoons, and it shows in their record. Seth Smith and Chris Young share time in left field and at DH, Eric Sogard and now Alberto Callaspo share time at second base, and John Jaso (when healthy) and Derek Norris split time behind the dish.

The platoon I want to highlight is Nate Freiman and Brandon Moss at first base.

Freiman was picked in the second round of the Rule 5 draft this past offseason by the Houston Astros. He was originally drafted by Texas, but never really panned out for them. He was nearly added to the Astros 25-man roster to begin 2013, but Carlos Pena, Chris Carter, and Brett Wallace forced the Astros to place him on waivers, which is where the Athletics got him.

More Rule 5 stuff - If the Athletics ever remove him from their 40-man roster, they have to offer him back to the San Diego Padres, which is from whom the Astros took him in the Rule 5 draft.

This is what Kevin Goldstein, the Astros' Director of Pro Scouting had to say

"This is a guy who's worth taking a chance on, a guy we've like since his days at Duke," Goldstein said. "He was great in Arizona and played well for Israel as well. Right-handed guys with that kind of power are not normally available in the Rule 5. He destroys left-handed pitching, and he's a guy you give an opportunity to him in the spring and see what he can do."

Brandon Moss was also a bit of a scrap-heap pickup for the Athletics when he was signed to a minor-league deal after the 2011 season. Moss was the primary return to the Pirates back in 2008 in the Jason Bay - Manny Ramirez trade. Moss fell short of expectations, eventually slipping to the bench, then was outrighted to AAA the next season.

The point I'm trying to make here is that when you use platoons, you are not just leveraging players in to situations where they will perform better - you also happen to save quite a bit of money.

Here is how they hit against righties:

If you were to look purely at Moss vs righties and Freiman vs lefties and adjust to a single slash line based on plate appearances by each player, you would end up with a .275/.337/.484 slash line with a .356 wOBA.

That .356 wOBA for Athletics first basemen is enough for ninth place among all first basemen, tied with Allen Craig, and ahead of the likes of James Loney, Adrian Gonzalez, Mike Napoli, and Eric Hosmer.

Adrian Gonzalez makes $21M this year, Napoli $5M, Hosmer makes $528k with just over a year of service time, and Allen Craig, on one of the more team-friendly deals for first basemen will earn an average of $6.2M over the next five years.

Again, the combination of Brandon Moss and Nate Freiman makes $2.09M this year, and they are tied or better than all of the above players in terms of wOBA.

The Rays have been using a combination of Sean Rodriguez ($1M) and Matt Joyce ($2.45M) in left field.

Combining the slash lines like we did with the Athletics, Rays left fielders have hit .259/.348/.433 with a .345 wOBA, which would put them in a tie for eighth among major league left fielders. Again, you don't lose bench flexibility as you still have suitable players on the bench who could come in at any time.

How does this relate to the Blue Jays, now that we're 1000 words in? Well...I feel like the Blue Jays could improve the team with platoons. It would take quite a bit of skillful GM-ing, and I'm not entirely sure that any of it is possible, but it's fun to make lineups anyway.

It's not even that hitting has been the problem for the Blue Jays this year, it's just that I really enjoy making lineups. So here we go!

The Blue Jays have clear holes at catcher, second base, and left field, and potentially an issue at one of first base or DH as well, if Adam Lind's option is not picked up.

Here is one possible scenario that I might like to see next year. The players acquired are for the most part free-agents after this season or the next, courtesy of MLB Trade Rumors. 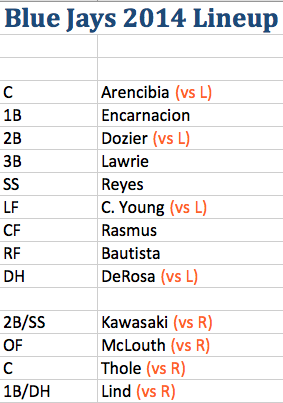 I feel like the offense would be better than the 2013 version, and yet, I can't see Anthopoulos doing much to adjust the lineup, considering how awful the pitching staff has been. Regardless, it would be nice to see the Blue Jays platoon as much as possible, as I believe that it would lead to a more successful team... assuming something can be done about the pitching.