Yes the Astros' bullpen is quite bad, but could Bo Porter maybe be ready to make a change?

Share All sharing options for: Bo Porter Takes His Time

My first post this baseball season was one commending Bo Porter for his use of platoons in the Astros' first game of the year, a game in which they beat the Texas Rangers, and everyone made funny jokes about the Astros being better than the Rangers.

I liked Bo Porter. I really did. He seemed like the perfect manager for the Astros - one who could get the most out of his players by leveraging them in to situations that benefited the players and the club. Porter has been platooning all year, and it has been working out well, as platooning often does.

That's a thing that Bo Porter does really well. There is another thing that Porter does not do very well, and it involves the bullpen. In the four game series against the Blue Jays this past home stand, Bo Porter did something moderately annoying that I figure he has been doing for the entire season.

On Sunday, in the eighth inning of a 1-1 tie, Rajai Davis reached first base by drawing a walk against LHP Travis Blackley. This is what happened when the next batter, Brett Lawrie, came to the plate:

Blackley was clearly never meant to pitch to Lawrie, and this whole process took about 1:20, from the time Lawrie stepped in to the box until Blackley was removed from the game.

Yes, it's only about 80 seconds, but shouldn't the bullpen be ready to go? I mean, the Blue Jays were not going to pinch-hit for Lawrie, so Porter knew what was coming.

Is this actually against the rules of baseball? No...not technically. The only rule that could possibly be related to this is found under section 8.05 of the official rules.

8.05 If there is a runner, or runners, it is a balk when... (h) The pitcher unnecessarily delays the game;

The only penalty, if the umpires had decided that Blackley was in fact delaying the game, would have been a balk. Throwing over to hold the runner on first does not constitute delaying the game, but when two pickoffs are attempted, following a change of pitcher, without actually throwing a single pitch to the batter at the plate...uh...sounds like delaying unnecessarily to me.

Porter then did the same thing again in the same game.

In the bottom of the ninth inning of the same game, still tied 1-1, Emilio Bonifacio laced a leadoff double to centerfield. Then, this series of events: 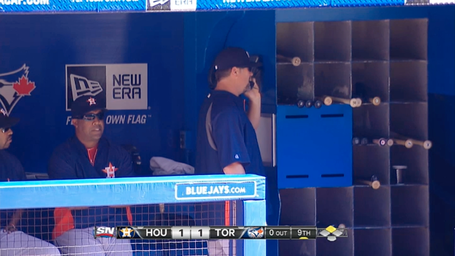 The signal to the bullpen is made one minute and forty five seconds after Bonifacio reaches base safely.

It slows down the game to a point where everyone gets frustrated about literally nothing happening. There is already enough time in a three hour ballgame for nothing to happen, we don't need more time in which nothing can happen.

Again, this process does not violate any particular rule related to mound visits, as under rule 8.06, a manager may not visit the same pitcher twice in the same inning. Porter never visits twice.

Earlier this year, however, Bo Porter did violate the rules in a game against the Angles. Porter brings in Wesley Wright, then, without Wright throwing a single pitch to a batter, Porter brought in Hector Ambriz. Mike Scoc Scosci Scioscia comes out to argue and eventually protests the game. Have a look for yourself.

I also found this article by Dayn Perry on Porter's understanding of the rule.

I'm getting away from things - regardless, the whole point of this article is to point out the fact that these pitching changes tend to delay the game and frustrate many people.

Mike Scioscia arguing the way Bo Porter handled the pitching change, and we have a really long delay as umps huddle.

Bo Porter is the absolute worst in his delay tactics. Every single friggin time.

Blackley just threw over to first three times to allow Bo Porter, who can't run a bullpen, to get his reliever ready. #BlueJays #MLB #Astros