Who Are Ya: Tommy Hanson

Share All sharing options for: Who Are Ya: Tommy Hanson

Tommy Hanson takes on Todd Redmond today in another 10:00pm for Blue Jays fans in the Eastern Time Zone. Hanson, a 26-year-old righty, came up with the Braves in 2009 and was very good in his first year finishing third in Rookie of the Year voting (behind J.A. Happ). Another two successful years with a mid-3.00 ERA appeared to have solidified Hanson as a Braves starter for years to come. Then in 2012 he was pretty bad and his peripherals didn't signal that better days were ahead for Hanson as his home run rate was on an upward swing and he was leaking velocity.

In the offseason the Braves decided to cut bait with what looked to be injured goods and got Jordan Walden back in return. The Braves questionable decision looks to have been a smart decision as Hanson has been hurt and equally as bad as he was in 2012. A 5.15 ERA and a 4.60 FIP in 11 starts combined with a 1.40 HR/9 have illuminated the "true" Tommy Hanson. His velocity has been back in the 90's after coming back from injury, which is far cry from his rookie mid-90's velocity, but better than his Mark Buehrle-esque mid-80's at points in recent years. This a great article looking at his mechanical changes with some cool GIFs.

Tommy Hanson is a fastball, slider, and curveball pitcher and has become even more susceptible to fly-balls than he was when he broke into the league. Only 35.7% of balls in play are ground balls this season for Hanson, while the number was still only 40.2% in his debut season. His curveball is probably his go-to breaking pitch and Hanson has a high tendency to throw the pitch when ahead in the count, although at points this year Hanson his thrown his slider in starts more than any of his other pitches: 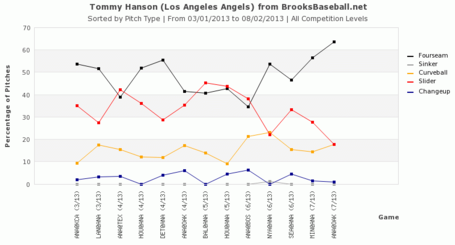 You can see that Hanson's slider and curveball both look similar in movement, but the curve continues to drop more steeply: 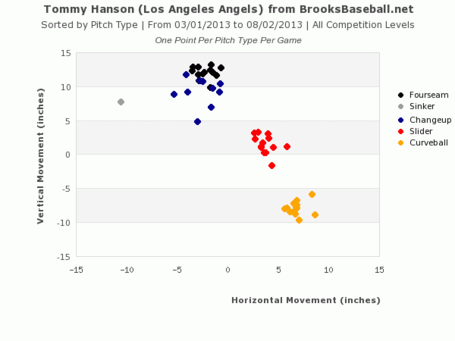 Left-handed hitters have always hit Hanson better so here's my lineup that won't look anything the Blue Jays' lineup card:

Find the link between Tommy Hanson and that one scumbag Brewers player.

Enjoy the game. Hopefully Toronto doesn't make everyone go to bed by the third inning.