Who Are Ya: Ivan Nova (Now An Ace)

Share All sharing options for: Who Are Ya: Ivan Nova (Now An Ace)

Ivan Nova and Esmil Rogers face off today in the first part of a doubleheader. The second preview will come later on in the afternoon. Nova faced the Blue Jays twice in August with the previews here and here, but now there's a bigger sample size this season to look at the right hander with. If the Blue Jays needed any more bad news, it's that Nova has become dominant since he last faced Toronto. Back in April, Nova was cruising along with a 6ish ERA and a severe lack of command. Currently his ERA sits at 2.99 and his FIP is 2.81, with a K/9 of 8.97 which is the highest of his career and a BB/9 of 2.58 which is the lowest of his career.

Aside from some injuries this season and a stint in AAA Scranton, Nova has become a great number two pitcher. Just to make matters worse, Nova has a .335 BABIP this year, meaning that his ERA could actually go further down before things are said and done. He actually hasn't allowed more than three runs in a start since the first game against the Blue Jays on April 21.

Nova has simplified his repertoire to a simple fastball, sinker, and curveball mix which has produced great results. He throws the curveball a huge amount of the time when he has two strikes against the batter, especially lefties. It helps that the curveball is getting nearly a whiff on nearly half of the swings hitters take against it. He seems to try and locate down and away against righties, but doesn't exclusively throw it there: 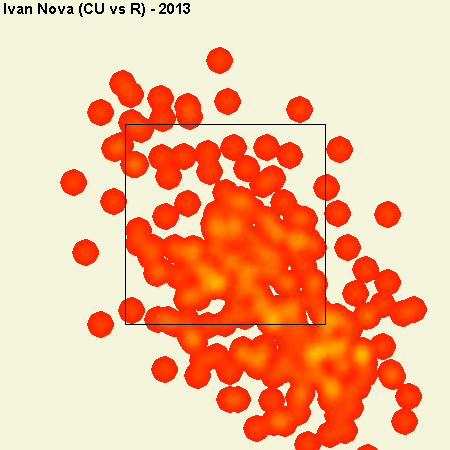 You can see his curveball is quite quick coming in around 82mph most of the time:

Ivan Nova is pretty split neutral so the lineup I'd put out there would be:

For the first "Find the Link" of today:
Find the link between Ivan Nova and the Yankees' utility outfielder from Key West, Florida at the turn of the millennium.

This could be bad, enjoy!