Who Are Ya: Phil Hughes (Not An Ace)

Share All sharing options for: Who Are Ya: Phil Hughes (Not An Ace)

Phil Hughes goes against Mark Buehrle in the second part of this depressing doubleheader with the Yankees. Like Nova this afternoon, Hughes faced the Blue Jays earlier in April (preview here), but unlike Nova, Hughes has had a inconsistent and mostly bad season. Hughes' ERA sits at 4.97, while his FIP is 4.71. Nothing much stands out about Hughes' stat line other than his 29.6 GB%! That number makes Hughes the biggest fly ball pitcher in the league by a pretty wide margin.

Hughes repertoire is still heavily fastball-slider, with the curveball and changeup both being thrown under 10% of the time this season. His fastball still sits mid-90's, but he doesn't really have a good off-speed pitch to keep hitters off balance, although his slider hasn't been hit too hard this season (hasn't been missed much either mind you).

Here's what all of Hughes' pitches looked like to Jose Bautista:

If that's a little difficult to keep track of, here's the movement in a more readable chart form: 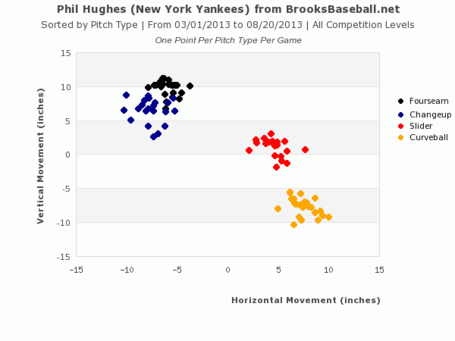 With Bautista leaving this afternoon's game with hip soreness and Hughes getting smashed by lefties here's the lineup I'd like to see today:

That is a really bad lineup unfortunately.

For the second "Find the Link" of today:
Find the link between Phil Hughes and the starting quarterback of the J-E-T-S JETS JETS JETS.