Who Are Ya: Adam Warren

Share All sharing options for: Who Are Ya: Adam Warren

Adam Warren gets a rare start for the Yankees tonight against R.A. Dickey. Warren is a 25-year-old righty from University of North Carolina who was drafted in the fourth round of the 2009 draft. He pitched in one game last year, a start, and was pounded hard by the Chicago White Sox. This year he's been an innings eater in the bullpen and hasn't done the best of jobs in that role. His ERA sits at 3.57, while his FIP is 4.66 in 58 innings pitched.

Warren throws a fastball, sinker, curveball, changeup, and slider all over 10% of the time each with his fastballs sitting mid-90's as a reliever. His changeup looks to be his best pitch and he throws up nearly a third of the time against left-handed hitters.

A look at the movement on his pitches shows how loopy his curveball can be and also how much run his changeup has: 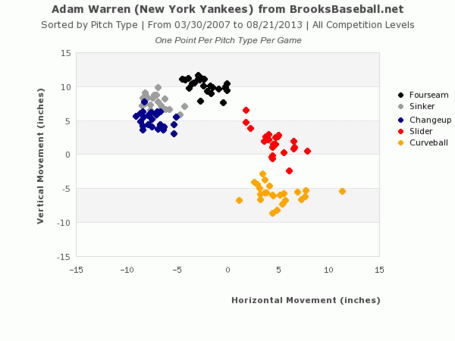 Lefties are crushing Adam Warren this year, but with so many injuries the lineup I'd put out there would be:

For the "Find the Link":
Find the link between Adam Warren and the starting left fielder of the top team in the NL East.
In closing, Adam Warren is a spot starter and likely nothing more. Hopefully the Blue Jays can hit him around tonight.