That time Adam Lind walked against a lefty

Hitting for the cycle, throwing a no hitter, a left handed pitcher walking Adam Lind - these are the rarities of baseball; the moments you live for as a fan.

Share All sharing options for: That time Adam Lind walked against a lefty

It happened approximately three weeks ago, the night of August 2nd. You very well may have been asleep as it was a 10:07pm start against the Angels, and the walk in question occurred in the top of the sixth inning, two hours and nine minutes in to this ballgame.

The game was tied at four, and the Blue Jays had runners on first and second with one out - the inning had begun with the Angles leading 4-2, but Tommy Hanson's inning before departing went single-home run-groundout-single-walk.

The Angels number two prospect to start the year, Nick Maronde, was summoned to face Lind. Maronde is a lefty, and as many know, Adam Lind is not very good against lefties. It would have seemed like the logical move, and with Colby Rasmus on deck, if Lind were to reach, Maronde could stay in to maintain the lefty-lefty advantage.

From January 2013, here is a scouting report on Maronde courtesy of Jason Parkes:

Nothing really on any command issues whatsoever, and yet, based on the 51.1 inning sample, Maronde almost profiles as a power throwing reliever who at times struggles to locate his pitches, despite his fastball topping out in the low 90s.

Maronde's command isn't the only thing that factors in to this at bat - Adam Lind's tendencies also play a large part, so let's go pitch-by-pitch and take a look.

Pitch 1 - slider, down and away, ball

Adam Lind has a .224/.244/.303 line against lefties, with a 2.6% walk rate and a 30.8% strikeout rate in 78 PAs. 30.8%! That's a lot of strikeouts. He's actually one of the worst hitters against lefties with at least 70 plate appearances. Here Adam Lind nearly offers at a first pitch slider, which I find strange for a number of reasons:

1. Adam Lind does not really swing at first pitches.

This particular table shows pitch outcomes for 0-0 counts when Lind faces right-handed pitchers. He swings at only 7.76% of first pitch fastballs, and only 9.52% of first pitch sliders.

How about first pitch tendencies against lefties only?

Lind has swung at three sliders thrown by lefties as the first pitch of the at bat. Because I can, I went and found those pitches. The pitchers were Barry Zito on June 5th, Dallas Keuchel on July 27th, and C.J. Wilson on August 4th.

Those three pitch outcomes were foul-whiff-whiff, if you missed it.

Not much to say about this one, although interestingly enough Lind swings at 64.71% of 1-0 fastballs thrown by lefties. That's a whole lot of swinging.

Pitch 3 - slider, down and away, ball

This is the exact same pitch as the first, and this time Lind doesn't even seem interested in offering. He's learning!

Maronde misses his spot pretty badly here. Chris Iannetta sets up down and away, which, according to this heat map courtesy of ESPN, is the right spot to locate against Lind. 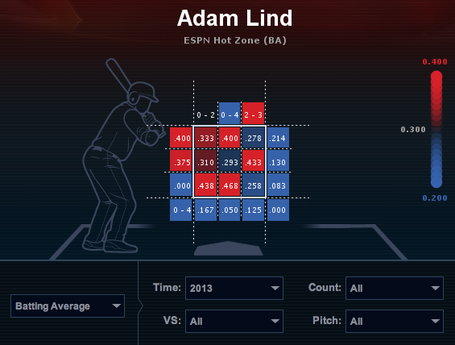 Luckily for Maronde and the Angels (and this post!), Lind misses on a location that he seems to normally hit.

Iannetta sets up in the exact same spot and Maronde misses quite badly again. Baseball is hard. Catching is hard. Pitching is hard. Can you imagine trying to throw a baseball 90 miles per hour and have it go precisely where a guy crouching 60 feet away from you wants it to go? That sounds difficult.

Also, notice Chris Iannetta motioning to Maronde after he catches the ball? I imagine he's saying something along the lines of "Please don't walk Adam Lind. Just hit my glove. Right over here. It's Adam Lind. He's not good against you. You throw with your left hand. He's good against guys that throw with their right hand. But not you. Oh no. You throw with your left hand. ... ... Please don't walk Adam Lind"

Iannetta sets up in the same spot yet again, and Maronde misses yet again. Although this miss was the least he missed of all the misses during this at bat.

Here is the AB, again from Brooks Baseball. 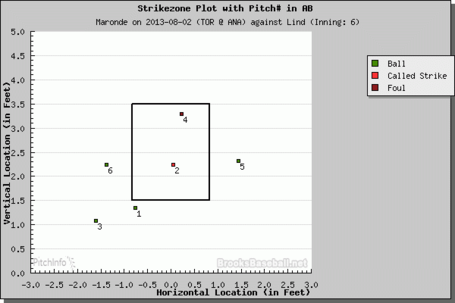 This pitch missed the strike zone by a bit less than 1.5 feet, which seems like a lot, but the typical called strike zone for left-handed batters usually extends out a bit past the plate due to positioning of the umpire. The zone would perhaps expand out 1.25 feet past the plate, so in reality, this was a much closer pitch than earlier thought. I would not have second guessed Lind for swinging at this pitch, but he didn't, and it worked out, because he drew a walk against a lefty!

This was actually Lind's second walk against a left-handed pitcher this year, believe it or not. The first came against Hyun-Jin Ryu, believe that or not. This at-bat was more fun though, as Ryu just kind of missed location a bunch more than Maronde in this at bat.

I was thinking that Adam Lind's two walks in 78 plate appearances vs lefties would have been something historically bad, yet there are three left-handed hitters with more plate appearances and a lower walk rate in 2013 against left-handed pitchers - Oswaldo Arcia, Daniel Murphy and Ichiro Suzuki.

Late Night Edit - He did it again! Lind drew a walk against lefty David Huff last night on five pitches. I however do not feel like rewriting this so enjoy as if it were yesterday.