Another creative loss: Blue Jays downed 5-3, swept by the Yankees

Blue Jays 3 @ Yankees 5. Like the game, this recap had to go through a long delay.

Share All sharing options for: Another creative loss: Blue Jays downed 5-3, swept by the Yankees

Well, at least there was some creativity in this loss. The Blue Jays and Yankees were scheduled for an early afternoon game on this getaway day, but since the Yankees could not afford to build a roof over their ballpark (poor guys) everyone had to wait three hours and 32 minutes for a particularly large and slow rain cloud (I think it's known in the meterological circles as a "cumulomelky") to pass by. This long delay was just five minutes shorter than the longest rain delay in Blue Jays history, which occurred on April 10, 2009 in Progressive Field. It was just two minutes shorter than the longest rain delay to start a game in Blue Jays history, which happened at Exhibition Stadium--also against the Indians--on August 2, 1987. In both of those games, the Blue Jays won, so I guess the Jays did set a franchise record for the longest rain delay in a loss (old record was a there-hour and 18 minute delay at Exhibition Stadium versus the Red Sox on September 26, 1985). Yay!

Notice that I spent most of the first paragraph not talking about the game. That seems to be the theme in the past few game recaps. But I guess that I should go and actually do talk about the game in order to continue doing my job and cashing my cheques.

In the "good news" category, the Blue Jays scored the first run of the game on a J.P. Arencibia solo shot in the fifth. Toronto had struck first in all four losses this series in Yankee Stadium, which is just fantastic. Arencibia had not homered for six games, but to be fair he only struck out eight times in that span. The Blue Jays loaded the bases but, predictably, finished the inning without scoring another run. See, Arencibia's homer quashed the Jays' rally before it even got a chance to begin.

However, the lead was short lived. (The previous sentence is just cut-and-pasted from another game recap from this year.) In the bottom of the inning, Curtis Granderson homered off starter J.A. Happ, completing the circle of bad karma around Happ since he broke Granderson's hand in spring training. Don't worry--the bad karma around the Blue Jays will continue since R.A. Dickey broke Jayson Nix's hand on Wednesday.

Later that inning, first base umpire Scott Barry made a mistake that cost the Blue Jays a couple of runs. With one out in the inning, the bases were loaded with Yankees: Eduardo Nunez on third, Chris Stewart on second, and Ichiro Suzuki at first, with our old friend Vernon Wells at bat. Wells hit a shallow fly ball that centre fielder Rajai Davis dove to catch, then Davis threw it to second base where Munenori Kawasaki tagged Chris Stewart to complete the inning-ending double play, then Kawasaki tagged Ichiro Suzuki (who was also at second) just in case. 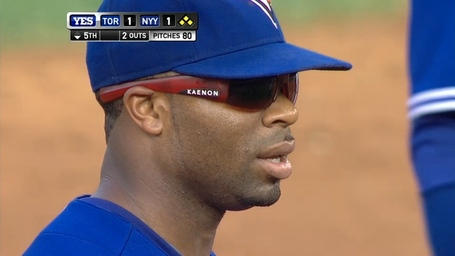 Rajai Davis, in his Kaenon sunglasses, looks on in disbelief. It's kind of funny that he stayed shocked for at least the next half inning.

The problem for the Blue Jays was that Scott Barry didn't see it that way. He thought that Davis had trapped the ball even though it was clear to me that it was caught above the ground. Then Alfonso Marquez, the second base umpire, missed that Kawasaki had tagged Ichiro too. If there were no outs that would've been a triple play. Perhaps the Jays would've gotten out of the inning if John Farrell had let Jon Rauch eat Marquez.

In any case that was ruled a an 8-4 force out for Wells, and Nunez came into score. John Gibbons, was understandably angry, kept on yelling "he caught the f___in' ball!" and got tossed--not very gentlemanly. If this had happened next year, Gibbons (or his successor) would have calmly walked out onto the ball field and presented the umpires with a request for a replay. Interestingly, Ted Barrett the crew chief, also tossed Mark Buehrle--the Blue Jays pitcher who, according to some sports radio callers, doesn't care about the team because of Ontario's bulldog ban--for his sass. But hey, you must admit that this was a pretty creative way to lose the game.

In the bottom of the sixth, Happ walked a couple of batters, then reliever Brad Lincoln walked another before Nunez singled in two runs. Then acting manager DeMarlo Hale called for Aaron Loup. Loup induced a ground out, but it brought another one of the walks in to score to make it 5-1.

Happ didn't look great, but he did put together a few solid innings before the walks in the fifth and sixth. He threw 97 pitches, 60 of them for strikes and struck out four while only allowing three hits, but he walked five Yankees.

With Shawn Kelley coming in for the ageless Andy Pettitte in the seventh, Toronto mounted a little comeback attempt. Moises Sierra walked, Kevin Pillar singled, then Kawasaki brought a speedy Sierra in on a single. The bases were loaded again with a Jose Reyes single. A batter later, Edwin Encarnacion hit an RBI grounder to shortstop Eduardo Nunez, who smartly went to get the force out at third. With the bases loaded and a righty on the mound, Hale relaced Mark DeRosa with pinch hitter Adam Lind, and Joe Girardi immediately called for southpaw Boone Logan who promptly struck out Adam Lind on a 1-2 slider.

So the Jays had an early lead then made it interesting by making it 5-3. But a loss is a loss. The club is now 14 games below the .500 mark and are 17.5 games back of the Red Sox. Their elimination number is now 17. The Astros' elimination is just 4 so with the Rangers' help, the Jays could eliminate the Astros this weekend.

Jays of the Day! Jose Reyes (+.106 WPA) for some fine pigeon shooing. Brett Lawrie (-.049) didn't have the numbers at the plate, but he made some pretty plays at third again.

Here's something fun to finish off this dreary game recap: Kevin Pillar talks to MLB Fan Cave's April Whitzman about himself!