Some pitchers happen to throw a rare slow breaking ball. Here are a handful of the slowest!

Share All sharing options for: Fast season for slow pitches

Wednesday night, in a game between the Chicago Cubs and the Washington Nationals, former Blue Jay Carlos Villanueva threw a curveball that made Jayson Werth ponder his very existence on this planet. In that moment, Werth realized that he was in fact wearing a polyester uniform in front of tens of thousands of people, whilst holding a wooden stick trying to hit a ball made of tightly wound rubber hurled at him at speeds reaching 100 mph.

This one happened to be 57 miles per hour.

After this pitch, Werth laid down his bat, stripped off his uniform, and walked east out of Wrigley. People say they saw him just walk straight across Lake Michigan. Rumour has it that he is running an organic farm near Kalamazoo.

Here are the slowest pitches of 2013, so far. Essentially these are all the pitches that are under 60 mph. You'll notice that there are a few pitchers who tend to appear on this list multiple times.

I've included the batter reaction post-gif and the reaction of the announcer of the batting team, as they are less likely to know that the pitcher is able to throw a slow curve and will hopefully have a more hilarious reaction.

Batter Reaction: Some mouth shouting and some staring at the bat. It's the bat's fault.

Announcer Reaction: "Boy that's about one of the slowest you will see. We've seen Arroyo throw some 65-66 but I mean...Votto had a chance to say Yes/No/Yes/No ok I think I'll swing"

Announcer Reaction: Nothing really except for "slooooooooow breaking ball"

Funnily enough it looks like Choo should have been called out. 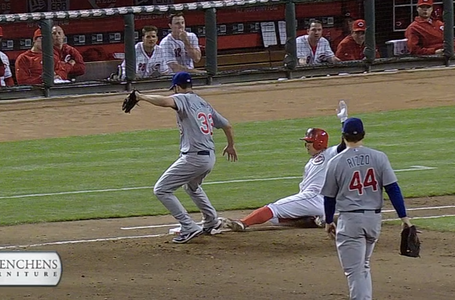 Announcer Reaction: "There's that big lollipop curve." (What does that even mean?) Play by play guy laughs, "59 miles an hour".

Batter Reaction: Nothing, nothing at all. J.D. Martinez is quite focused.

Batter Reaction: Wells takes the pitch, then steps out of the batter's box, looking around, slightly confused, spitting. The spitting is important.

Announcer Reaction: They don't notice - they had just spoken to Robin Ventura in the dugout and were reacting like a couple of 16 year olds who had just stood within 20 feet of One Direction or some other band that young girls like. Seriously, the camera was just on Ventura after the interview for a solid 30 seconds. Weird. At least Hawk Harrelson wasn't working.

Announcer Reaction: "...with Doumit tapping out on a pitch that I don't think hit 70 miles per hour." You got that right, announcer guy. Also, later, "Doumit cutting across the mound saying something to Maholm about that slow breaking ball." Probably something awkward.

Batter Reaction: Backs out, looks towards dugout for some sort of reaction, get nothing, steps back in.

Announcer Reaction: Colour commentator is talking about the Pirates, but then struggles to put words together when he sees the pitch: "It's a 3-3 ballgame right here towards the end, which is *Alvarez throws ball*... what ... the uh ... Pirates ... love to see..."

Batter Reaction: Utley is mad about the called strike, then walks back to the dugout with his head down is some sort of state of shock and/or disbelief.

Announcer Reaction: If you were to listen to this without watching the video, you would assume that it was just a normal pitch that Utley was caught looking at: "Utley down on strikes, does not agree with Mike Everitt's call." He doesn't even acknowledge the fact that this was a very slow pitch. It could have been a fastball on the inside corner, and people listening might just think, "Wow Chase Utley, you're a jerk for arguing that nice fastball", but no, it was actually a freaking fifty seven mile per hour curveball that you are completely unaware of because this announcer can't be bothered to be somewhat excited.

Batter Reaction: Sticks knee out, crumples in pain because baseballs that hit bone hurt a lot, most likely.

Announcer Reaction: "Look at that pitch, that hit him! That couldn't have registered more than 60 miles an hour" "58. 58 miles per hour. Almost eephus-ish-ee" what

Jeff Sullivan wrote a nice piece on this particular pitch, you should go read it if you haven't already.

Announcer Reaction: "Well, there's that lollipop curve!" NO. STOP WITH THE LOLLIPOPS. ENOUGH.

Batter Reaction: Turns away, because again, baseballs hurt when they hit you. Napoli also seems to look away for a few seconds to try and figure out what on earth just happened. Can you imagine looking for one of a four-seam fastball, two-seam fastball, cut fastball, sinker, slider, or curve, and then seeing this "eephus-ish-ee" thing?

Announcer Reaction: "Once again he tries that big slow curveball to Napoli up high, and it almost got Napoli on that left shoulder." Once again, dearest Boston colour commentator? Oh yeah, Darvish also tries this slow curve more than once! That's seven pitches he throws! How fun! 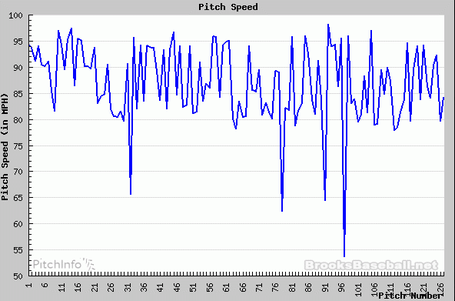 Bonus Author Reaction: This is an awful camera angle.

Okay, there you have it! A bunch of slow pitches and a bunch of reactions to said pitches.

Final tally, including the Werth one: