Who Are Ya: Brad Peacock

Share All sharing options for: Who Are Ya: Brad Peacock

Brad Peacock takes on Chien-Ming Wang in a Saturday night affair in Houston (you can Find the Link for those two pitchers yourself). Peacock was drafted all the way in the 41st round of the 2006 draft by Washington and pitched in three games with them in 2011. In the offseason following that 2011 campaign he was involved in the Gio Gonzalez trade with Oakland and then traded with Chris Carter this February to Houston for Jed Lowrie. In 12 games and eight starts this year Peacock has a 5.59 ERA and a 5.95 FIP. His control has been lacking reflected by a 4.66 BB/9, along with a dreadful 2.05 HR/9.

Peacock's repertoire includes a fastball, curveball, changeup, and slider with his fastball sitting low-90's most of the time. His curveball is his go-to pitch and is fairly effective when he can throw it for strikes. His rarely thrown slider gets a solid amount of whiffs as well. When Blue Jays hitters fall behind to Peacock they should expect his curveball a large amount of the time. You can see how much vertical drop Peacock's curveball has and also how much run his changeup features: 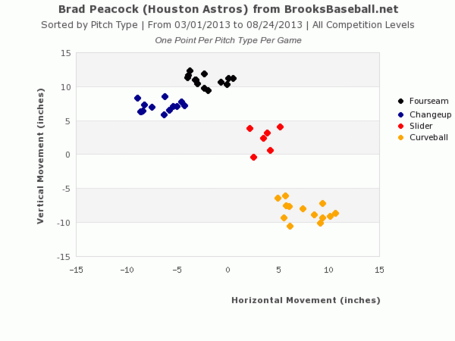 Some assorted media for your amusement include his nasty curveball GIF from his debut:

Plus a classic video of the umpire beaning him during his last start:

I'm not even completely sure who's on this AAAA team anymore so making a lineup would be a useless waste of time. To the "Find the Link" for today:

Find the link between Brad Peacock and the former #6 ranked prospect in ALL OF BASEBALL the offseason before his second year with the Blue Jays.