Mark Buehrle did enough to keep the Toronto Blue Jays in the game and he needed to, because his teammates didn't do much at the plate against the Houston Astros until the top of the ninth. Buehrle threw 115 pitches, 71 for strikes, and allowed just seven hits and two walks in his eight innings of work, striking out seven Astros on the way. He also made a great fielding play, recovering quickly from a comebacker off his hand in the seventh.

Buehrle was OK, coming back to strike out the next batter on three pitches then coming back out for a 1-2-3 eighth. He did all that he could, and Jays fans should be appreciative of his efforts of late. He won his 10th game of the season, extending his personal streak of 10-win seasons to 13.

Let's recap how the three runs scored in this game came about. For Houston, their only run came on a bases loaded double play hit by Jake Elmore in the bottom of the second. For Toronto, Chia-Jen Lo walked Moises Sierra in the tying run with the bases loaded in the ninth, then Ryan Goins grounded out against Kevin Chapman to score the go-ahead run.

Casey Janssen game in for his 23rd save, setting a career high. He did make it interesting, though, loading the bases by walking Jason Castro, allowing a single to Jonathan Villar, and walking Brett Wallace. Astros catcher Cody Clark, making his major league debut, bounced one back to the mound, Janssen jumped and deflected the ball before Ryan Goins grabbed it and threw Clark out at first to end the game. Goins could've stepped on second to force the slow Wallace, but whatever, he got it done and the Jays won! Yay! That was the Jays' first save since August 15. 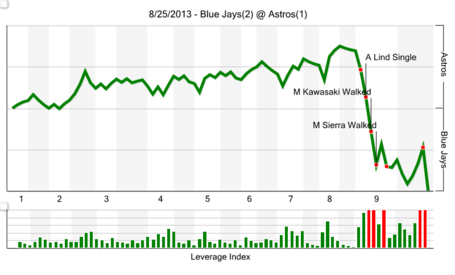 Suckage Jays Kevin Pillar (-.235) gets it but the umpire called a very generous third strike against him in the ninth, Rajai Davis (-.156).

The Blue Jays snapped their seven-game losing streak and return home to play the New York Yankees for three games before their off day on Thursday.