Leading off this week's Monday Morning Media Mashup is Matthew Kory's guide to jersey buying, which appears on Sports on Earth, a how-to in buying a jersey to show your love for your favourite team, which I would assume to be the Blue Jays for most of you. A quick disclaimer: I don't own any Blue Jays jerseys and never have but that's because I'm cheap.

Kory presented eight categories of jerseys you can get in his piece, and I will annotate it with the corresponding Blue Jays player:

This article reminds me of something Matt English (@mattomic on Twitter is a great follow, so do it) tweeted out earlier this month: 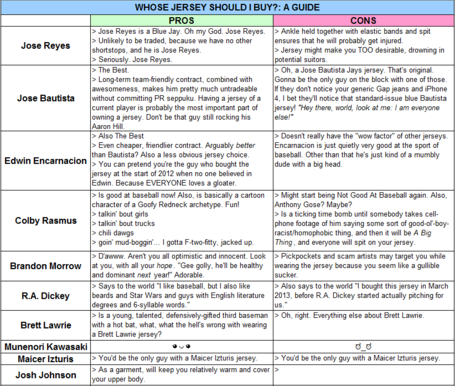 Minor Leaguer's Additional ProTip™: Never, ever, ever, ever, ever, ever, ever, ever buy ripoff jerseys. Not only does that displease Bud Selig, but ripoffs generally use incorrect fonts, graphics, numerals, patches, etc. that anyone with a keen eye can spot. Specifically, my personal pet peeve involves jerseys that have a name on the back (NOB) when there shouldn't be. If you head down to the Rogers Centre for this series, you will see Yankees "fans" wearing a bunch of RIVERA #42 and JETER #2 jerseys. Those types of fans are among the worst types of people in the world. I've recently also spotted folks wearing the Blue Jays' powder blue road jerseys with names like FIELDER or KEY or whatever on the back. The issue is that, except for 1980, the powder blues never had names on the back, and even when it did, it used a special typeface that has a white outline. I have yet to see someone wear a correct version of the 1980 road uniform. Someone came close, wearing an AINGE #2 jersey but the name on the back didn't have the white outline.

You can read parts one and two of my three-part series on the history of the Blue Jays uniform if you need further guidance. The third one is in progress (and has been since 2011), but you won't need it because no one would buy a throw-back angry bird / Black Jays-era jersey.

Let’s Talk About Player Development - Drunk Jays Fans
Last week, John Farrell contrasted the Blue Jays' and the Red Sox's player development process, saying that his current club combines three dimensions of development (mental, physical, fundamentals) while his former club is more one dimensional in only looking at "toolsy" guys. Even though some folks on Twitter have asked me to address this "controversial" quote here I was reluctant because I don't know nearly enough about the player development in the Blue Jays' and Red Sox's organizations to say anything intelligent and worth your time to read.

I know that the Blue Jays have a reputation of drafting and acquiring high-ceiling "toolsy" players, but I also know that they are not completely negligent in the other two dimensions. They have brought in people like Jamie Evans to handle the physical development (and rehabilitation) of pitchers, Tim Raines and Sal Fasano to develop fundamentals, and they even have a roving motivational coach in Steve Springer. We know their names but how are they compared to the corresponding roles with the Red Sox? I have no idea, and neither does Andrew Stoeten. But Stoeten does a good job at using what he knows to look at the myth that the Blue Jays don't produce big leaguers while their A.L. East rivals Red Sox and Rays are much better.

John Gibbons deserves another season in Jays dugout: Kelly - Toronto Star
When a team does badly, the fanbase calls for the firing of the manager or head coach. I'm sure that's how it is in every professional club, even though only in a few cases does the manager or coach actually play in the game. After such a disappointing year with such ugly, ugly losses, John Gibbons has been the target of many Jays fans, but Cathal Kelly (who was sensational on Twitter and in his recaps this weekend in his Blue Jays coverage) thinks you're wrong. I won't say much more about this because soon I'll devote a longer piece on the issue, but I will leave you with a Gibby quote from the article: "For my own gratification, I want to win a World Series here. But more important, I want to win it for [Alex Anthopoulos]. He has confidence in me, but it couldn’t have been easy."

And in the quiet, someone screams, "You. Suuuuuck." To which heads turn in both dugouts.

Jays' losing experience "awful", "frustrating" - TSN.ca
Scott MacArthur speaks with several Blue Jays about how they feel about their latest bout of crappiness. Casey Janssen chimed in with an interesting quote about whether everyone on the club is still playing with pride and not giving into what the standings say:

"I don't know," said Janssen. "That would have to be a question for each individual person if they were to look in the mirror and say, hey, I did everything I possibly could this season and it worked out or it didn't work out. Then they would have to maybe evaluate either their preparation in their in-season or off-season program to make it better."

"I would think that there would need to be some changes," said Janssen. "I would also say that the snowball is so big that right now it's tough to say because a fresh start would do a little bit of good. There are definitely some holes that got exposed. I would say, just from my evaluation, if we came back with the same team, although I think it would be different, it might not be a championship team."

It is difficult to dissect that single quote to find something meaningful to interpret but I think it's clear that Janssen has a few names in mind who might not exactly be mentally checked-in. I do believe that some change needs to be done to this team but we will likely not see a big turnover this offseason.

Ford Leaders in the Field - Sportsnet.ca
Ben Nicholson-Smith speaks with DeMarlo Hale, Chad Mottola, and Torey Lovullo about a day in the life of a major league coach, giving fans a bit of an insider's look into what the old men in the dugout do outside of games. This is actually the eighth installment of Sportsnet's "Leaders in the Field" series--they are all pretty good reads so do take your time and go through them.

Injury may have been blessing for rejuvenated Jenkins - BlueJays.com
Gregor Chisholm spoke with Chad Jenkins, who attributes his latest callup to the injury he suffered in Buffalo after a few lackluster starts with the Bisons following his demotion in late May.

Flashback Friday: The 1998 Toronto Blue Jays - The Blue Jay Hunter
Last Friday, Ian looked back at the very talented 1998 Blue Jays club. I think most fans don't fully appreciate how great that team's offense and starting pitching (PED-supported or not) was. Every starter except for Pat Hentgen had a below-average ERA, with Roger Clemens leading the way with a 174 ERA+. In the bullpen, Paul Quantrill (179 ERA+) and Dan Plesac (123 ERA+) formed a perfect lefty/righty middle relief combo. Little known fact: the 1998 Blue Jays were the origins of the the phrase "mind your 'P's' and 'Q's'". I think it was the 1997 and 1998 clubs that cemented my love for the Blue Jays.

No, I didn't miss it, but I'll share anyway. Matthew Pouliot noted that as of Saturday night, Edwin Encarnacion was on pace to finish the season with 41 homers and 69 strikeouts. Only two players since 2001 have had a 40+ home run season while striking out fewer than 80 times: Albert Pujols did it six times and Barry Bonds thrice.

Ontario farmers create giant Blue Jays-themed corn maze - Cut4
Literally "down on the farm," starting next Saturday, you can visit Lisa and Steve Cooper's Blue Jays-themed corn maze for just $8 admission. I have been there before (that year they had a Maple Leafs-themed maze), and it is pretty fun, although right now it seems like a little early to go to a corn maze. It's more fun with the leaves having turned colours already. The Coopers' farm is in Zephyr, which is near Mount Albert, which is beside East Gwillimbury, close to Newmarket at the end of the 404, an hour and a bit north of Toronto.

Drabek’s loss of command leads to Bisons defeat - The Buffalo News
The Bisons are still kind of in the playoff race in the International League, tied with the Lehigh Valley IronPigs for third in the wild card standings at 2.5 games back of the Rochester Red Wings. Their 2-2 series split with the IronPigs this weekend could have propelled them up the standings, but they fell 7-0 Sunday after a masterful effort by Sean Nolin on Saturday (6.2 IP, 0 R, 5 H, 4 K, 3 BB). Kyle Drabek fought his control, getting deep on counts, but he says that his arm felt good in the outing.

The Mets' AAA affiliate Las Vegas 51 are in first place and 10 games ahead in the Pacific Coast League South , while the Buffalo Bisons are now long shots to make the playoffs in the International League. This has led to some Bisons fans to question whether it was such a good idea for them to have dumped the Mets in favour of the Blue Jays. Mike Harrington thinks that, as parent club, the Blue Jays have been much better to the Bisons than the Mets ever were, and reminds readers that it is difficult to translate minor league results between leagues. As I will let you guys know later this week, the Bisons management agrees with Harrington's take, and say that they are more than happy to have changed partners last September.

Yesterday there was supposed to have been a matchup between Roy Halladay rehabbing with the Reading Fightin Phils (actual name) and Deck McGuire starting for the New Hampshire Fisher Cats (actual name). But with the Phillies playing a seven-hour 18-inning game on Saturday, Halladay had to be called in for an emergency start with the big club. McGuire did his best Halladay impression, though, and was perfect through six innings before allowing a walk and a triple to star the seventh. He finished the inning, only allowing two hits and two runs while striking out seven in his start. On the offensive side, Kevin Ahrens and Kenny Wilson both chipped in with two-run home runs, while catcher Jack Murphy was a homer short of the cycle. The Fisher Cats are 15.5 games behind the Binghamton Mets, but are only three games behind the second place Trenton Thunder. In the Eastern League, the top two teams in each division play each other in the first round.

Leg Kick of the Week

Moises Sierra with a backward leg kick against Chia-Jen Lo of the Houston Astros (GIF by Shermanator91):

This Week in Stupidity

On Sunday morning, Damien Cox decided he was going to tweet about the Blue Jays and a few standard blah blah blah fire John Gibbons tweets later he logged onto the interwebs and found out this cool fact:

Wow that settles it. Let's hire Rich Dauer. I also found an interesting fact too, and it may be of use for the Tampa Bay Rays:

@bluejaysbatboy ya, no. But gibbons + anthopolous r out after awful season + then the brainwashed homers can b in love again with new guys

I'll let you decide how reliable Marty's sources are with his own tweet from four months ago:

Uh huh. John Farrell made Mike Napoli into a star. Mike Napoli is batting .192/.323/.288 in August. I mean, even J.P. Arencibia is doing better than that this month.