Should the Blue Jays Take a Look at Edinson Volquez?

Share All sharing options for: Should the Blue Jays Take a Look at Edinson Volquez?

On Saturday the San Diego Padres designated Edinson Volquez for assignment after a horrific performance the night before against the Chicago Cubs. The start lasted 0.2 innings where he allowed five earned runs if you were wondering. In the five years since his breakout year with the Cincinnati Reds in 2008 where he placed fourth in NL Rookie of the Year voting (his teammate Joey Votto finished second to Geovany Soto...) Volquez has accumulated a cool -2.0 rWAR. Interestingly, his fWAR over that span (based on FIP) is actually 2.0 WAR because his FIP has been greater than his ERA for the past four seasons. This season the gap has been quite large with his 6.01 ERA lagging far behind his 4.20 FIP. It's tough to say if there's something in Volquez's game that makes him susceptible to higher ERA's than his FIP indicates he should have.

As you'll recall, Volquez was shipped to Petco in the 2011/12 offseason in the Mat Latos, Yonder Alonso, Yasmani Grandal swap. As you might not recall, he was originally shipped to Cincinnati in 2007 from Texas for Josh Hamilton before he even reached the major leagues.

Control has always been a problem with Volquez, proven by his 4.27 BB/9 rate during his solid 2008 year and it hasn't gotten any better (green is his BB/9 and blue is league average): 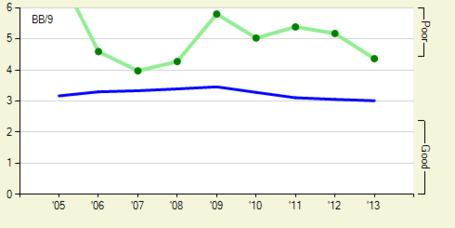 I wrote a "Who Are Ya" post about Volquez back in early June when the Blue Jays faced him in San Diego. In that start he went five innings allowing four runs backed by seven strikeouts. Just a quick recap of his stuff from that post:

Volquez throws a four-seamer and a two-seamer both in the low 90's. He complements it with a curveball and a changeup. His pitch usage is pretty even against batters on both side of the plate throwing his changeup almost a fifth of the time against same handed batters. The pitch is usually either located in on the hands or down and away in the dirt.

This curveball we speak of is actually quite nice and might have some potential if he can find a way to throw it consistently for strikes like he used to.

Edinson Volquez reaches his first free agent year after this season and is currently playing out the last month of a one year $5.725 million that was signed earlier this year to avoid arbitration. He's likely not going to take much of a pay hike with his spotty performance, drug history (along with great excuse making), and horrible control. The Padres have until September 2nd to either trade, release, or outright Volquez after clearing waivers.

A possible scenario for Alex Anthopoulos would be to pick up Volquez, possibly giving up something inconsequential in return if a trade is the route taken and give him a month test run. If Volquez has promise, an extension could be agreed to that is team friendly in the hopes that Volquez could be better starting rotation depth next year than Chien-Ming Wang and his journeyman friends that have been toeing the rubber for the Blue Jays recently. If Volquez walks everyone he faces, then nothing is lost for either party and the Blue Jays look elsewhere for starting pitchers. As an aside, there's no possibility of qualifying offers (not like the Blue Jays would want to give Volquez one) because a player has to be with a team for a full year before they can take the qualifying offer route.

The downsides to this scenario would be the 40-man roster spot that Volquez would take up during the last month of the season although there are some players who are candidates to be transferred to the 60-day disable list, such as Melky Cabrera. The other negative would be the starts that Edinson Volquez would be taking away from prospects such as Sean Nolin or Marcus Stroman during the time of expanded rosters in September.

In closing, the 30-year-old right hander is definitely an option for the Blue Jays although it's tough to say how much thought Alex Anthopoulos will put into acquiring the the massive question mark that is Edinson Volquez. The Blue Jays have turned around pitchers on the scrap heap before and if they could get Volquez's walk rate down he would be quite a serviceable pitcher, which is obviously easier said than done. Personally, I'd lean towards just letting prospects make the majority of the starts next month to see what kind of depth the Blue Jays have in the minor leagues, but the acquisition of Edinson Volquez is a (maybe slim) possibility.