To bunt, or not to bunt, that is the question:Whether 'tis Wiser at the plate to sufferThe Slings and Arrows of the great Rivera,To hit away against a Sea of Yankees,And bring in ample runs: to win, to loseNo more; and score enough to say we endThe Heart-ache, and the thousand Natural shocksOf another Pinstriped win?

Last Tuesday (Aug. 20), the Jays were tied 2-2 going to the 9th in the second game of their day-night doubleheader against the Yankees. With no possibility of the save, the Yankees brought in Rivera to preserve the tie and have the chance to walkoff in their half of the 9th. Leading off, Jose Reyes reached on an infield single, and John Gibbons chose to attempt a sacrifice bunt with Gose at the plate, to be followed by Pillar, Kawasaki, and Rajai Davis.

Of course, we know what happened: twice Gose failed to keep his bunt fair, running up an 0-2 count which meant taking off the bunt and having him swing away from a deep hole. And that failure was likely very costly - after Gose and Pillar were retired, Kawasaki lined a single. Reyes, running on contact from second with two outs likely scores to push across the go-ahead run and bring in Janssen for the save. Instead, Reyes and Kawsaki were stranded and Darren Oliver yielded the winning run in the bottom of the 9th.

In the gamethread, a pretty vigourous debate ensued as to the wisdom of bunting in that situation: was it good strategy with failed execution, or a poor strategy that predictably backfired? This is my attempt to answer the question.

As a starting point, we know that bunting on average reduces run expectancy, and outside of very low run environments it should be generally avoided. This is well covered in Chapter 9 of The Book: Playing the Percentages in Baseball (Tango, Lichtman, Dolphin) - I'll be referring to concepts and data that come out of that chapter quite a bit going forward. In general, more runs results in more wins, so bunting is a poor strategy. But late in tight games, this is not necessarily the case, as increasing the odds of scoring one or two runs at the expense of the odds of a really big inning can result in a higher expectancy. We can see this by looking at the win expectancy (WE) chart for a team on a road going to the bottom of the 9th (numbers estimated from Fangraphs for 2013 games):

If you go to the bottom of the 9th down 1, you've lost. So if you're down 1 in the top of the 9th, getting 1 run is obviously critical, since the game will not end. But even if that happens, a team will only expect to win about 36% of the time. Interestingly, scoring a second run, to get a one run lead, will actually increase the chances of winning more than scoring the first run. That makes for a tough trade-off for a manager trying to decide to play for one run to tie, or 2 or more to take the lead.

However, when the game is tied, the first run is really critical (WPA of 44%) and the second run is much less so (11.5%) - the first run is basically 4 times as important as the second run. And obviously, there's no threat of the game ending immediately if you don't score. This is basically the situation faced by John Gibbons. So what would a successful bunt do, in terms of WPA? When Joe Reyes got on 1st with none out, the Jays' Win Expectancy was about 59%. With a runner on second, 1 out, it would have been about 55.5%, which is 3.5% lower. Lower is worse, so case closed?

The reality is, not even close. The first issue is that bunting is not guaranteed to succeed. Tango et al. found that from 2000-04, from the 7th inning onwards, 78% of plate appearances in which a sacrifice bunt was attempted with a runner at 1st and none out ended with the batter bunting the ball in play. In the other 22%, therefore, there was an attempt without success, and though some would be balls taken, a lot would be foul bunts. Only 54% of the time is the batter out with the runner advancing (including some non-bunts). On the other hand, 19% ended with a runner on 1st, one out (either through a force or the batter being out). That's a success rate of advancing the runner of 78% (whether ultimately through a bunt of not). The other 27% represent all other possible outcomes. However, on average the expected value of all these outcomes is greater than if there was a guarantee of sacrifice bunt being laid down and succeeding. Therefore, bunting the the situation the Jays face would not result in the Win Expectancy falling from 59% to 55.5% - it would be lower, but somewhere in between,

The second major issue is that Win Expectancy is based on generic odds - the results of a given situation over many outcomes. It's the average outcome of a confrontation between the average pitcher and average hitter, in the average stadium, with average hitters following and average defensive talents. In general, bunting is more optimal the lower the run scoring environment. The average run environment in the AL in 2013 is about 4.3 runs/game, and Rivera is probably 20-30% above average at suppressing runs, with Gose, Pillar, Kawasaki and Davis (v. RHP) projecting at something near 20% below average. That would lower the run environment for this situation to about 2.6 runs/game, which is extraordinarly low. And that in turn is very conducive to bunting.

If Reyes is bunted to 2nd, there's a good chance he can score on a single to the outfield - certainly if there's two out. If he's on 1st, it probably requires an extra base hit, or two singles (or a walk and then single, but not the reverse). With low power hitters the chance of an extra base hit is much lower than normal, especially with Rivera on the mound (since 2011, he's allowed an ISO of .098, meaning about one extra base every 10 AB, compared to 0.150 as league average). Likewise, since Rivera suppresses hits and walks (.268 OBP since 2011 compared to league average around .330), the chance or stringing together hits is much lower as well. Granted, this applies to needing just a single as well in the case of a successful bunt, but the odds compound the more you need strung together. Both these factors increase the case for bunting.

How to reconcile all this? Ideally, we'd take all the data about the hitters and Rivera (including updated information based on him having yielded a leadoff single), estimate their talents and defensive quality, offensive characteristics of Yankee Stadium, etc, and calculate the likelihood of all outcomes. Then, run it through a large number of simulations for the top of the 9th for each scenario, and look at the range of outcomes.

Unfortunately, something this complex is not easily done. But I think I can get reasonably close with a simplified simulation, in the following manner. The outcomes I included were 1B, 2B, 3B, HR, K, BB/HBP, GB outs, FB outs, and LD outs. I estimated the last three by taking projected ball in play outs and allocating according to the player's batted ball profile and league average BABIP for each (most line drives end up as hit, so there's very few LD outs).

For each player, I took the average of their rest of season ZiPS and Steamer forecast from Fangraphs as an estimate of their true talent for each possible outcome in my simulation. Where something wasn't available (GB%, etc), I took a rough estimate according to the last couple seasons (for Pillar assumed league average). Then, for each batter pitcher match-up, I took the average of both the batter and Rivera relative to 2013 AL League average. It looks something like this:

For Gose, I assumed he's an average late inning bunter, and for the bunting scenario assume the distribution of outcomes discussed above (54% successful bunt, 1% both reach, 4% GIDP, 19% batter out, runner fails to advance). For the other 22% involving 1B, 2B, 3B, HR, BB and K outcomes, I substituted the expected results of a Gose/Rivera matchup.

For GB outs, in possible double play situations, I randomly assigned GIDPs based on league average rates of GIDP in the situation. Similarly, for FB outs, I assigned SFs in the same manner, using rates 10% below league averages to account for good arms in the Yankees OF. Similarly, runners on 2B tagged at the same rate.

That leaves a number of possible outcomes out of the simulation: wild pitches/passed balls, stolen bases, errors, etc. Obviously, this will skew things a little bit, but I believe it should be relatively neutral between the two scenarios, which is the most important part. Simplicity requires tradeoffs. In terms of runners advancing on hits, I assume that all batters advance the same number of bases as the hitter gets with less than two out, and an extra base with two outs. Again, not perfect, but it should not terribly bias the simulation.

Finally, I only simulated for the next 6 batters: Gose, Pillar, Kawasaki, Davis, DeRosa, EE. If the inning is still going at that point, Rivera will probably be gone or have left, with numerous runs on the board. Once the lead gets to 3, the Win Expectancy does not change much. For innings that were still alive at that point, I added to the expected run scoring to the end of the inning into the total runs (It doesn't make a big difference).

I ran 2,000 simulations of the 9th inning for both the bunting scenario, and the hitting away scenario. For each simluation, the only difference was Gose's result, and all subsequent batters were programmed to do the same thing if they came to bat. The results were as follows: 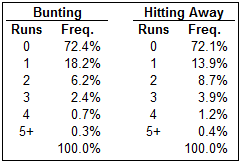 As expected, bunting reduced the run expectancy for the inning significantly, from 0.51 runs to 0.43. It increased the likelihood of scoring one run by by 4.3%. However, critically, it decreased the chance of scoring 2 or more runs from about 14% to 9.5%. Overall, this meant that the chance of taking the lead was roughly the same in each scenario - in 2,000 simulations, the difference in total innings in which they failed to score was 6.

Overall, I found this quite surprising. Given that pitcher and hitters to follow, I thought this would be a situation where attempting to bunt made sense. Instead, it appears that hitting away might have been a marginally better strategy.