Hiroki Kuroda's Domination of the Blue Jays this Year

Share All sharing options for: Hiroki Kuroda's Domination of the Blue Jays this Year

In the three starts that Hiroki Kuroda has made against Toronto this year on April 20th, April 25th, and May 17th he has pitched 21.1 innings and allowed only four earned runs. That's good enough for a 1.69 ERA against the Blue Jays this year. His stats in those games also include 11 hits, 15 strikeouts, three walks, two home runs and a world of hurt for Toronto hitters.

Kuroda has amassed 320 pitches thrown in his three starts against the Blue Jays and the breakdown is as follows: 18 fourseamers, 133 sinkers/shuuto, 78 sliders, 17 curveballs, and 73 splitters. If you're good at math, then you'll realize one pitch wasn't picked up by pitch f/x as that only equals 319 pitches. If you want to see what that looks like in GIF form then I have just the thing (click on the links below the GIFs if they don't work):

With his reliance on the three S's of the slider, sinker, and splitter he has at his disposal three pitches with three different types of movement. The slider breaks away from right handed batters with a hard bite, while the sinker runs in quite hard on their hands. Against left handed hitters, the splitter tumbles down and in one their hands resulting in an extremely hard to hit pitch: 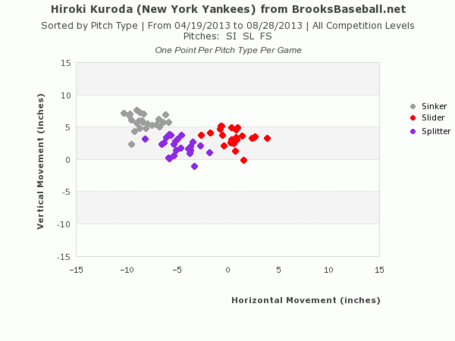 How should the Blue Jays go about beating Hiroki Kuroda if they haven't fully boughten into TankFest 2013 yet? Well, just five days ago the Tampa Bay Rays chased Kuroda from the game after six innings milking him for seven earned runs and four home runs. All but one of Tampa Bay's runs came off the long ball and the game wasn't even at Yankee Stadium, where home runs soar more frequently than narratives from Buck Martinez's mouth. Three of the four home runs off Kuroda in that game came within the first three pitches of the at-bat, which is similar to how Toronto hit them off him back in April.

Kuroda has such great control that hitters seem to pounce on the first hittable pitch they see and swing hard. Since the Blue Jays have so many black holes in their lineup, having the power hitters swing freely with home runs as their intention seems to be a possible winning strategy for tonight's game. If they wait until Kuroda is into pitcher's counts, then they can expect to see pitches like these all night:

The Chicago Cubs grinded out a tough victory last night in Los Angeles, so that's good to see.