Tuesday night the Padres moved players around defensively 36 times. Ok maybe not that much, but multiple players played multiple positions yet Ronny Cedeno played an entire game at short stop.

Hello friends! I am currently on the one-day DL with a stone somewhere between my kidney and the tip of where it comes out. As I sit around at my house (home from work for the day post-ER) having been prescribed some drug that's supposed to help, I can't help but wonder: what if I had just gotten really drunk instead? I read something a while back about a can't fail strategy for dealing with kidney stones, and before I write about anything moderately baseball related, here is said recipe for success (and pain!) from a stranger on the internet:

(Editor's note: SB Nation and Bluebird Banter is for entertainment only and anything written in the contents must not be taken as medical advice.)

My family gets these a lot and as true rednecks, we have a cure! First, you need supplies: a case of dark beer (Guinness Black works best), a gallon of cranberry juice, and a gallon of water. Call your friends and family for moral support. Chug a beer. Chug a glass of cranberry juice. Chug a glass of water. Repeat until you're too drunk to feel and your bladder is about to burst. Go to the bathroom. If you hear something that sounds like a bb hitting a hubcap, congrats! If not, time to keep drinking.

Related to this, did you know that (former Blue Jay) Miguel Olivo passed a stone in a game in 2010 then kept playing? He literally went to the dugout bathroom and passed a stone mid game, then right after thrusting a sharp rock through his urethra, he put on his catching gear and went out there to catch baseballs thrown at approximately 90 miles per hour.

"Believe me, it's not fun," said Olivo. "Sometimes, when I've got that thing, I just want to die. But I can handle pain a little bit. Once it's gone, I'm normal, I'm good. Let's play baseball."

Note that while Olivo was completely fine with passing a stone, but being a Marlin and being benched in favour of Jeff Mathis hurt him so much he just stood up and walked away from the ballpark during the game one day.

Anyway, as I sit here waiting for that one time that I will have to scream while in the middle of a piss, here is some baseball stuff.

Tuesday night the Padres played the Diamondbacks in Arizona. There were some...unique moments in terms of defensive positioning and alignment.

First, have a look at the box score and be sure to note positions played.

Yes, five different players played third base for the Padres in this game. Jedd Gyorko, Chase Headley, Alexi Amarista, Logan Forsythe, and Jesus Guzman all had at least one turn at the hot corner in this 10-inning game--Gyorko and Guzman found themselves at third three different times each on top of it all. In total, that would be six different times that a player was moved to third base from another position or the bench. Positional changes even happened multiple times in an inning twice.

Why though? San Diego does have many players with great defensive flexibility, in that most of their players can play multiple positions, but why the need to keep changing where they stand?

Let's look at the times players were moved to play third base and why.

Headley, who started at third, had to leave the game with back stiffness, and Amarista was brought in to pinch hit. This gem from the D-Backs colour guy:

"Well this could very well set off a chain of events that we've seen in just about every game we've played against the Padres: some outfield roulette!"

That is an accurate statement. In the bottom of the inning, some defensive changes occurred with Amarista now in the game.

Logan Forsythe moves from LF to 3B

Will Venable moves from CF to RF

Our first replacement third baseman is outfielder Logan Forsythe, who is listed as a "second baseman, third baseman, and shortstop" on Baseball-Reference. Most of his games this year have been at second base, with 33 there against 27 at third/short/left/right/pinch hitter combined. National League baseball is fun!

Alexi Amarista moves from CF to 3B

Will Venable moves from RF to CF

Adam Eaton tripled, Paul Goldschmidt doubled, Martin Prado walked, Aaron Hill was hit by a pitch, Gerardo Parra hit a weird two-run single, and in the bottom of the fifth inning with one out, Ian Kennedy was pulled after giving up six runs on 99 pitches. 99 pitches in four and a third innings! That's a lot.

Colt Hynes was brought in, and Logan Forsythe was removed from the game. Your new third baseman, Alexi Amarista, is listed as a ‘centerfielder, second baseman, and shortstop'. He had played all of 17 innings at third base in his career to this point. The Arizona play-by-play and colour guys are laughing at this point, because Bud Black changed his entire outfield and third baseman again.

Even Mark Kotsay has no idea what is happening. 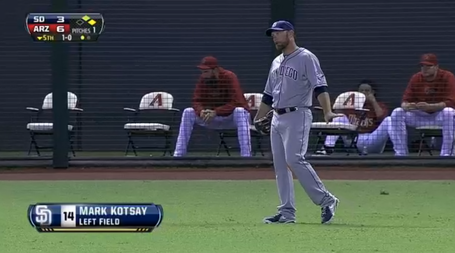 Jedd Gyorko moves from 2B to 3B

Jedd Gyorko makes his first move of the game, going from second to third base, and Jesus Guzman enters the game. We'll be seeing him soon. At least Bud Black didn't change his entire outfield this time.

Jedd Gyorko moves from 3B to 2B

Jesus Guzman moves from 2B to 3B 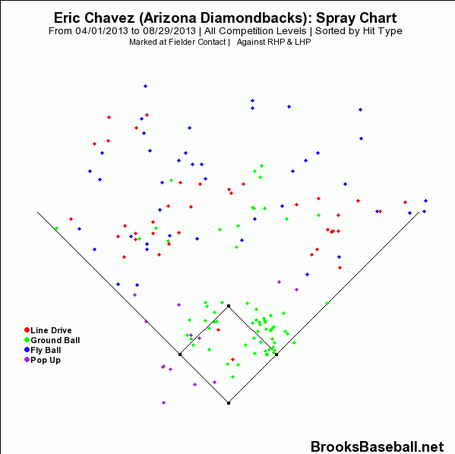 I'll spare you the details, but Jedd Gyorko is a noticeably better infielder than Jesus Guzman, hence the move of Gyorko to second base. You'd clearly want your better defender where a player is more likely to hit the ball, especially in the bottom of the ninth of a tie game. To be honest, I'm not sure why teams don't use this tactic more.

Related - check out this game between the Jays and Mariners from 1988, wherein Cecil Fielder and Kelly Gruber alternated positions more than a few times.

Chavez would ground out to first, so the tactic essentially pays off, as the ball was hit in the general area where the Padres thought it would be hit.

With left-handed hitting Adam Eaton up at bat:

Jesus Guzman moves from 3B to 2B

Jedd Gyorko moves from 2B to 3B 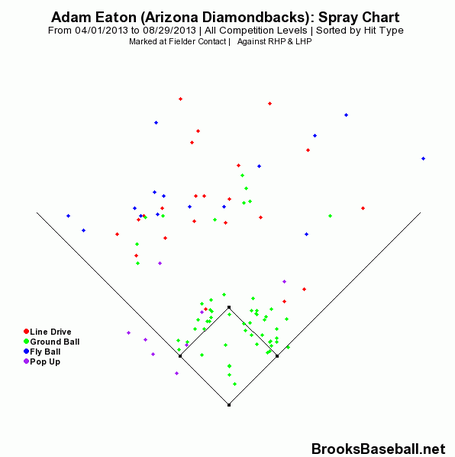 Originally I was expecting Gyorko to remain at second, but I suppose the Padres were expecting a bunt to get on base. Regardless, Eaton would single on a ground ball to the opposite field.

After the single, with Paul Goldschmidt up at bat:

Jedd Gyorko moves from 3B to 2B

Jesus Guzman moves from 2B to 3B 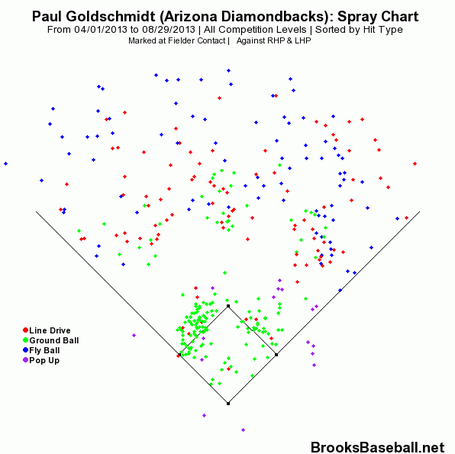 Now, here is where things get really interesting for me. Paul Goldschmidt is on first, Adam Eaton is on third, Aaron Hill is at the plate. On the third pitch of the at bat, Goldschmidt takes second base on defensive indifference, and this brings Bud Black to the mound, where this happens.

Mark Kotsay moves from LF to 1B

Yonder Alonso moves from 1B to LF

That's sort of right, I guess. What we have here is a five-man infield of Jesus Guzman at third, Ronny Cedeno at short, Jedd Gyorko also sort of at short, Yonder Alonso at second, and Mark Kotsay at first. 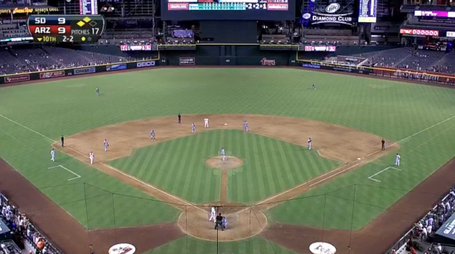 The idea once again is that Aaron Hill will pull the ball to the left side of the infield, and you would be able to hold the runners and get the out at first, or go home for an out, either way not allowing a run to score.

So, again, five players were used at third base, with Jesus Guzman and Jedd Gyorko swapping multiple times in the last few innings. Yes, the Padres were playing the odds, but the strategy did not end up paying off, with batters ultimately getting on base regardless.

Was this a case of over-managing, or did Bud Black just get unlucky? I still think they were the right moves.