There were two major sporting events in the western hemisphere Saturday night: UFC 163 down in Rio de Janeiro and the Wing, Cheese, Celery Race in Buffalo. I think that just like the preliminary fights at UFC, no one really cared about the baseball game that happened around the race. But since this is still technically a baseball blog, I have to recap it after the race recap.

Coca-Cola Field celebrated Celery Bobblehead Night this evening, giving away a Celery bobblehead to the first 3,000 fans. Having examined one myself, I have to say that it is more of a bobbletorso than a bobblehead, as Celery really doesn't have a neck. Celery is a beloved mascot in Buffalo, despite her not winning a single WCC Race. The race was built up through the whole game with video sequences showing what Celery has been doing the past week. In a dream sequence, Celery actually won the race.

The race started, as always, in right-centre field going clockwise. Atomic Wing took a large lead at he beginning, but then Celery caught up and was in the lead around the turn, down the foul line. Celery still had a large lead past the right field bullpen, but the evil bully Carrot hopped into the race and tried to tackle her. Fortunately, the three other mascots in the race (Atomic Wing, Bleu Cheese, and Chicken Wing) protected Celery by pushing Carrot down and beating him up. They were cheering on as Celery ran unimpeded to the finish line, but then out of nowhere this happened:

Chicken Wing just pretended to help Celery then, when she let her guard down, did the two-handed push to knock her down by the first base coach's box, exploiting her high centre of gravity. Chicken Wing then coasted to the finish with a stolen win. The dirty move of all dirty moves. Chicken Wing will not be winning a sportsmanship award anytime soon. Celery may not have won, but at least she would be able to sleep at night (and dream of winning).

Unlike their major league brethren, the Buffalo Bisons are in the thick of an International League playoff race. Coming in to the game they were 1.5 games behind the Pawtucket Red Sox for the Wild Card spot (and 3.5 back of Rochester for the North Division lead). They only play divisional games from now until the end of the season, so the upcoming stretch of games are huge for the club.

In game one of the four-game series against the PawSox, the Bisons sent out their best and most consistent starter Thad Weber, who definitely should be looked at as a potential fill-in starter with the Blue Jays. The PawSox countered with knuckleballer Charlie Haeger.

Buffalo, who was no-hit Friday night until Anthony Gose broke it up with a single down to the last strike of the game, got out of the gate quickly. Mike McCoy scored on a Mauro Gomez double to the wall in the bottom of the first. Unfortunately the Bisons seemed baffled by the knuckleball the next four innings, not collecting another hit until a couple of back-to-back singles in the sixth.

Thad Weber had another good start. He got Pawtucket 1-2-3 in the first, but got into some trouble in the second, loading the bases until he struck out catcher Alberto Rosario on three pitches to end the threat. That inning, Anthony Gose used his speed to catch a Drew Sutton fly, ranging far into right-centre. Weber's toughest inning was the top of the fourth. After the first out, the PawSox recorded four straight hits--two singles and two doubles--to score two runs to give Pawtucket the lead. The second single was a great example of a lucky hit. With the runner at first going on the pitch, second baseman Jim Negrych went to cover second, and Ronald Bermudez popped one up right to the place where Negrych had just vacated. Right after that, Jeremy Hazelbaker hit a double, tried to stretch it to three bases before being gunned down at third on a 9-4-5 putout led by a great throw by right fielder Mike McCoy. He looked surprisingly good out there tonight.

Weber finished the night throwing seven innings, giving up eight hits and two earned runs. He struck out seven PawSox and walked just one, lowering his ERA to 2.64. He has been solid since his return to Buffalo.

In the bottom of the sixth, Jim Negrych walked and Mauro Gomez, who is definitely not the speed type, legged out an infield single when the ball hit off of Haeger's foot. Clint Robinson followed up with a clean single into right, loading the bases for Andy LaRoche. Haeger threw a first-pitch knuckleball to LaRoche, who watched it sail past catcher Rosario for a passed ball and allowing Negrych to score to tie the game 2-2. Kevin Pillar was announced as a pinch hitter for Ryan Goins after LaRoche flew out, but he flew out to leave Bisons on second and third.

However, that effort by Gomez may have aggravated an injury. Manager Marty Brown explained after the game that Gomez did experience some pain on his side and that's why he was pinch hit for later in the game. It is a recurring problem, and Brown said that he is "worried" about his home run leader's status for the next few games.

Mickey Storey came in to replace Weber in the eighth and got the PawSox 1-2-3, and came out to start the ninth hoping to get the two-inning save. Unfortunately, leadoff hitter Justin Henry reached base on a bad error by first baseman Clint Robinson, allowing a ball hit right at him to go through the five-hole and into right field. I had been to a handful of games here in Buffalo and have seen some poor defensive plays at first by Mauro Gomez, Luis Jimenez, and now Clint Robinson. The next batter, Ronald Bermudez hit a sharp grounder to McCoy, who came in from right to play short. who threw it a little wide to Negrych at second for him to turn it into a double play. Bermudez then reached third on a single before Storey was lifted for John Stilson.

Stilson got the first batter to ground out, but it scored the PawSox's go-ahead run. He was able to get out of the inning without further trouble thanks to a great play by third baseman Andy LaRoche to keep a liner from going into left field and saving a run. But the damage was done, and the Bisons headed to the bottom of the ninth down 3-2.

The home team made two quick outs, and the game was in the hands of Kevin Pillar, the wunderkind from the 32nd round pick. Pillar worked a great, eight-pitch at bat to draw the walk. He almost ended the game, however, when Pawtucket right fielder Alex Hassan made a valiant but unsuccessful effort to catch a foul ball around the Bisons' bullpen. Ricardo Nanita, just activated from the DL, doubled to the gap off Jose Conteras to score Pillar from first and tied the game, and the Coca-Cola Field crowd went wild.

Next up was light-hitting catcher Mike Nickeas, hitting .161/.241/.217 coming into the game. After whiffing twice to start the at bat, Conteras threw a wild pitch in the dirt, allowing Nanita to reach third. On the sixth pitch, Conteras hung a ball to the fat part of the plate, and Nickeas turned on it and crushed it beyond the left field wall for the game-winning two-run homer. The crowd and the team went wild. It was great to see the entire Bisons squad--including Munenori Kawasaki--rush onto the field to greet Nickeas at home, then drenched him with yellow Gatorade.

Mike Nickeas was clearly the hero of the night, erasing the bad taste in the fans' mouths left by Celery's tragic loss. Clint Robinson owes him a steak for erasing his error in the top of the ninth. That homer was Nickeas' first of the year, and it came on the one-year anniversary of his last one, hit for the Bisons when they were affiliated with the Mets.

"We all love Mike," Marty Brown said after the game, "everyone roots for him," because of his offensive struggles this year. Then Brown went on to praise the catcher's work ethic, working extra hours with the hitting coach in the cage, and saying that he had been swinging the bat much better lately. 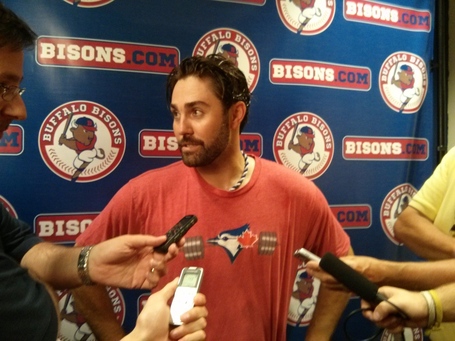 "I was thrilled to death," Nickeas recalled about the feeling after hitting that ball, "[especially] knowing that they were playing in. That was great, I felt a lot of love from my teammates and the fans. That was awesome." Nickeas then revealed that it was his first walkoff homer ever, at any level, in his life.

The Bisons are now 58-55 and the PawSox drop to 59-55. The Bisons are in third place, 0.5 games behind Wild Card leader Pawtucket and 3.5 behind North-leading Rochester.