After four years of having the distinction of having the greatest distance to their triple-A club, the Toronto Blue Jays signed a two-year player development contract with the Buffalo Bisons last September. It was to be a mutually-beneficial partnership—the proximity would make it easier for the Blue Jays to call up players, and fans in southern Ontario and western New York could catch game at both ballparks. Unlike most of the other things that have happened to the Blue Jays this year, the Blue Jays-Bisons relationship went just as planned. In fact, it went so well that the two clubs renewed their affiliation Thursday night, extending their relationship until at least the end of the 2016 season.

The ceremony happened during the game, after the third inning. The two general managers—Alex Anthopoulos for the Blue Jays and Mike Buczkowski for the Bisons—surprised the 16,998 fans who went to the Bisons’ final regular season home game by signing the extension to the player development contract right on the field.

I had a chance to speak with Buczkowski last Friday to talk about the Blue Jays-Bisons relationship, and he had nothing bad to say about the parent club from Toronto. With the two clubs being so close geographically, the Bisons have hosted Blue Jays front office personnel and roving coordinators at least once every homestand.

"If it’s not Charlie [Wilson], it’s Andrew [Tinnish], it’s Alex [Anthopoulos]," Buczkowski explained, "Alex drove up to come see Rickey [Romero] pitch in an afternoon game then drove back to catch the second part of the Jays game.

"Part of what has made this relationship so good is that they are very good at explaining things going on. They aren’t just saying, ‘we’re taking this guy, you’re getting this guy.’" 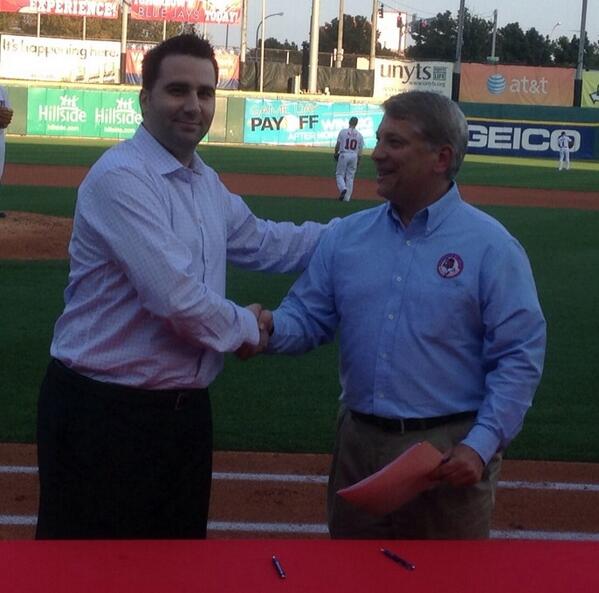 Alex Anthopoulos and Mike Buczkowski formally extended the Blue Jays-Bisons affiliation at a surprise on-field signing ceremony at the Bison's last home game of the season. Paul Beeston said that the partnership has exceeded their expectations.

Buczkowski credits Charlie Wilson, Director of Minor League Operation, for being in constant communication, and instead of moving chess pieces from a distance, he would explain why moves were made and when to expect certain guys to be recalled. Of course, this season has been especially frustrating as the Blue Jays have had to constantly dip down to the Bisons for help due to player underachievement and injury.

"Injuries are always especially bad for a triple-A team because [we] don’t get anybody back. When they call up a guy and option somebody back, in terms of talent, [we] will lose a pretty good player but [we’d] get a pretty good player back," Buczkowski said when asked about the Bisons’ starting outfield all moving up to Toronto within a week’s time, "and to have it happen at the time it did made it doubly tough. At one point we were in the lead for the wild card by a game of a half-game."

Although Buczkowski said several times that "it’s been tough," he understands that injuries happen and it is largely out of their control. During that week, there were some talk that the Bisons were not happy with their lineup being stripped bare by the Jays, but Buczkowski said that they actually were very appreciative of the Blue Jays for signing minor league free agents like Ryan Langerhans and Blake Gailen from the independent leagues for the last couple of weeks of the season. He specifically mentioned Charlie Wilson and Minor League Field Coordinator Doug Davis for arranging the signings. In a later interview on Bisons television, Anthopoulos mentioned that they even asked about major league players who were just released—although none of them chose to sign to play for the Bisons.

"There are a lot of other organizations that would say ‘there’s 13 games left, let’s just kinda get by,’ but the Jays didn’t do that. They found Langerhans to be the best fit out there and got him in," Buczkowski said, mentioning that one of the Blue Jays’ goals was to help the Bisons stay in the playoff race as long as they could. It would have been easier for the front office in Toronto to just tell the Bisons to play with a man short, like other unspecified organizations have done in the past.

Off the field, the Blue Jays have helped the Bisons from the business side as well. At the beginning of the season, they allowed Bisons ticket staff set up a booth in the 100-level concourse in the Rogers Centre, where they handed out schedules and sold ticket packages in Canadian dollars. And before every home game this season, the Blue Jays display game results and player statistics from each of their farm teams. The Bisons would like to expand their efforts this off-season to get to their Canadian fans earlier, including some promotional events when the Sabres face the Maple Leafs on November 15 and 29.

Since the 2014 International League schedule has already been announced, they are working now to craft ticket packages together to get fans to plan their visit to Buffalo early. Buczkowski said that he would love for the Blue Jays to send their Winter Caravan through Buffalo. He also mentioned that the Bisons and the Blue Jays are working on improving their "Blue Jays Day" promotion next year, perhaps with the Bisons wearing a special jersey for that event. This year, with Duane Ward and Candy Maldonado on hand as guests during Blue Jays Day, many Jays fans made their first visit to Buffalo.

Another thing that Mike Buczkowski was happy with was the arrangement to have eight Bisons radio broadcasts carried live on Toronto-based Sportsnet Radio 590 "The FAN" when the Jays were not playing. The eight games were a trial run, and it seemed to have gone swimmingly.

"For us, it’s invaluable time. It’s three hours that we’re on in Toronto talking Buffalo Bisons. I can’t imagine how many people listen to that and then decide to go to the game. Hopefully in the future we can get some of the games on TV," Buczkowski explained. Radio is comparatively easy, but TV has many more complications in terms of obtaining rights, sending signals, and various FCC and CRTC regulations.

Because Bisons personnel, including play-by-play announcer Ben Wagner, have been able to travel to Toronto, they have been able to form personal relationships with the Toronto media. Wagner had stopped by the Blue Jays broadcast a couple of times, and he is a frequent guest on Jeff Sammut’s show on the FAN giving affiliate updates to Torontonians.

All that—and a good product on the field, of course—have resulted in a massive increase in attendance at Coca-Cola Field. Overall, the Bisons have drawn over 537,000 fans to the ballpark, averaging 8,273, which presents a 12.5% increase in per game attendance--the largest single-season increase in Coca-Cola Field history, according to Shi Davidi.

Buczkowski mentioned that this year, online ticket sales from Canada were up 100% , and about half of overall attendance increase were because of Canadians visiting Buffalo.

"Starting in May we noticed it. We had a few weekend dates in May where our attendance was as good as previous years’ July weekends. And it has continued to be strong—we get great feedback from fans." Buczkowski added that the prevailing comments from new fans is that they could not believe how nice and affordable being at the ballpark can be—that’s exactly how my friends and I felt when we went down this year. The whole Bisons Experience—from the ballpark to the location to the game to concessions to between-inning entertainment—is top notch and I always have a lot of fun going there, and I don’t have to spend much to do so.

One promotion they had this season had them partner with a nearby hotel to sell a package that included tickets, dinner, and a room. The popularity of that shocked both the Bisons and the hotel, selling out twice. The night’s stay not only allowed Canadians to catch two games and not have to rush back home, but being out of the country for more than 24 hours allowed them to shop in Buffalo as well.

The Bisons.com website has had growth in visits as well, with a third of the visitors having Canadian IP addresses, up from around 15% in the past. The Bisons introduced poutine in their concession stands this season, and the vendors have told Buczkowski that they’ve had great sales to Americans as well as to visiting Canadians.

And the relationship works reciprocally as well, with many more Bisons fans traveling up to Rogers Centre to catch games this season. With the way this season has gone for the Blue Jays, Buffalonians were able to see many ex-Bisons playing for the big club days after seeing them at Coca-Cola Field.

Besides ticket sales and concessions, the next big source of income for a minor league ball club is merchandise sales, and those have gone very well. Right after becoming a Blue Jays affiliate, the Bisons ditched their old Mets-inspired logo and uniform set in favour of one that has more of a local Bisons flavour. Merchandise sales have gone up 150%, with half of the increase coming from visitors from Canada. Not only have they sold well in Buffalo, but the orders kept on coming in from the Blue Jays Shop at Rogers Centre. I have personally noticed multiple people wearing Bisons caps or t-shirts walking the streets of Toronto. And in Buffalo, they’ve sold more Blue Jays caps than they have ever sold (even though Yankees caps are still the best seller, Buczkowski added).

Asking about who the fan favourite was this year, I was surprised when Buczkowski said it was actually Munenori Kawasaki. We all know why he would be popular having seen him for ourselves in Toronto, but he only played 25 games in triple-A this season.

"Even though he has been here sparingly, [the fans] still chant his name here. Whenever he goes up to bat it’s always ‘Ka-wa-sa-ki’ and he would get the biggest cheers."

The Bison even held a Kawasaki shirsey night on August 13. The team had originally planned a design contest for the giveaway shirt and had it online for a month, but they received so many requests for a Kawasaki t-shirt that they changed their game plans. A bunch of fans were picked from the crowd to meet Kawasaki for an autograph session after the game, and Kawasaki signed and chatted even after they turned off the stadium lights. It came just in time, too—Kawasaki was called back up to Toronto the next morning.

I think changing their promotion and doing making a Munenori Kawasaki t-shirt says a lot about the Bisons team and how much it cares about what their fans want. It was unfortunate to see that the Blue Jays were not able to capitalize on Kawasaki’s immense popularity to do a promotion based on him this season.

Not a lot of things have gone right for the Blue Jays this season, but their partnership with the Buffalo Bisons has definitely been a clear highlight. Their relationship will last until at least 2016—or until 2055 if Paul Beeston has his way—and not only would the two clubs be able to benefit from it but fans in southern Ontario and western New York would as well.

Finally I asked Mike Buczkowski the most important question of all: when is Celery going to win the mascot race?

"I don't know," he answered with a coy smile, "you never know from night to night what's gonna happen with Celery. You just never know. It's been close a few times."