Who Are Ya: Ervin Santana (A Pending Free Agent)

Share All sharing options for: Who Are Ya: Ervin Santana (A Pending Free Agent)

Ervin Santana faces the Blue Jays tonight in the midst of one of his best seasons in the major leagues. His 3.21 ERA sits 29th among qualified starting pitchers and is the lowest of his nine year career. His FIP lags slightly behind coming in at 3.88 even though his BB/9 of 2.07 is one of the best walk rates of his career thus far. Back on April 14th Santana dominated the Blue Jays going eight innings allowing only one earned run on the afternoon.

The graph below shows how up and down Santana is from season to season: 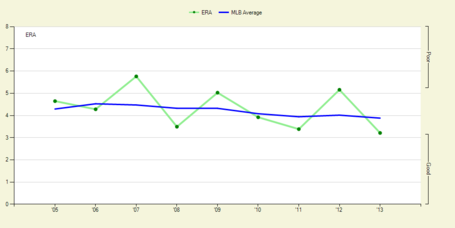 Santana has started working a sinker into what used to be a simple fastball-slider repertoire and it's had great results. As you can see, Santana never really featured his sinker in previous seasons: 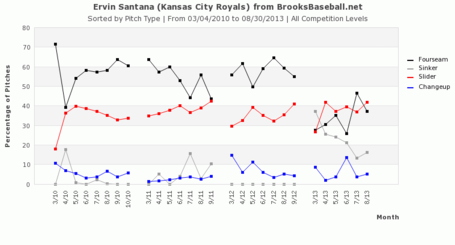 Santana is using his slider a high amount of the time when he's in pitcher's counts and it's led to a whiffs/swing rate of nearly 40% with the breaking pitch. The Dominican is also getting the same number of foul balls/swing with his hard stuff, meaning hitters aren't making solid contact with any of his offerings. This high quality GIF highlights his high quality slider:

Ervin Santana is playing out a final option year of a four year plus an option contract that totals $42 million for Santana's pocketbook. His fantastic pitching this year with Kansas City should net him a qualifying offer from the Royals, but he's most likely destined for a big pay raise from a team in love with his one great season that is willing to take a chance with him. It seems unlikely Alex Anthopoulos and the Blue Jays will be too heavily involved in this gamble, but you never know what could happen in the offseason.

Find the link between Ervin Santana and the loveable Blue Jays starting second basemen who kept the position warm before the legend of Aaron Hill arrived.

Here's the current standings as we reach the stretch run of the season: