Who Are Ya: Jeremy Guthrie

Share All sharing options for: Who Are Ya: Jeremy Guthrie

A new pitcher! A new pitcher! Jeremy Guthrie takes on the Blue Jays for the first time this season against the always knowledgable R.A. Dickey:

Guthrie is a 34-year-old right hander who spent the good bulk of his prime in Baltimore and had a fair bit of starts against the Blue Jays before moving to Colorado and getting smashed around until he landed in Kansas City. If Jeremy woke up from his nightmare in Colorado and said "We're not in Kansas anymore", well he would have been wrong. Guthrie has a 4.19 ERA and a 4.87 FIP. His K/9 rate is 4.98, which is one of the lowest in the league for a starter, but he's 13-10 so he must be doing something right (kidding).

Guthrie features a fastball, sinker, changeup, slider, curveball, and a slow curveball that clocks in at 65 MPH. If only a post about slow pitches existed, then we could grab a GIF from there of Guthrie's curve. Oh wait:

Guthrie is still throwing in the 90-94 MPH range and has the pitches to be successful in this league, but he rarely gets swings and misses and can't get batters out consistently enough. Performances from him this season are part of the reason the Royals are just lagging behind in the playoff race. Behind James Shields and Ervin Santana, the Kansas City starting rotation is a mess of backend pitchers who have been give too large of roles at Kauffman Stadium.

As you can see, his six pitches have two basic types of movement where they clump together: 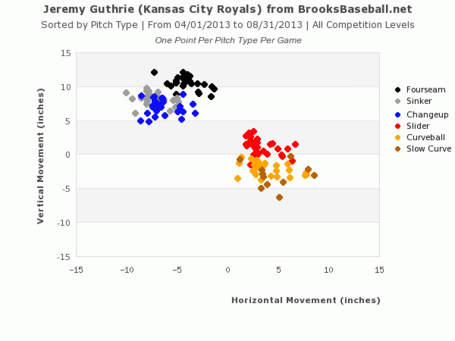 Left handers hit Guthrie much better than right handers and most teams stack their lineups with opposite handed batters against the Oregon native.

Find the link between Jeremy Guthrie and the second best Canadian born home run hitter of all time.