The Toronto Blue Jays lost 7-3 to the L.A. Angels in what, I must assume, was a super fun game.

Bisons won, in an actual fun game, against the Pawtucket Red Sox and can take the Wild Card lead with a win tonight. They gave away this: 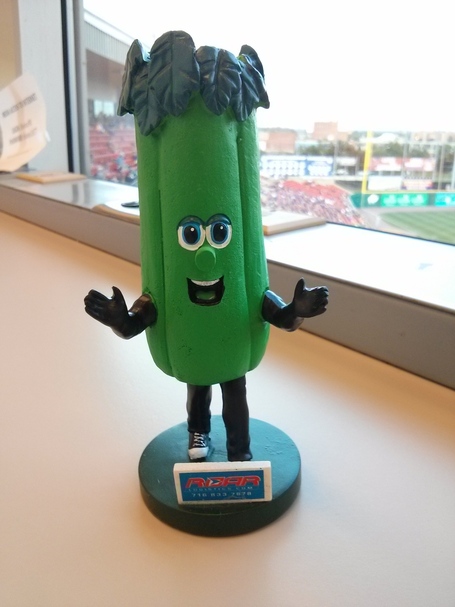 The Fisher Cats lost 5-0, getting just three hits against the Flying Squirrels of Richmond.

Yay, another organizational loss: the Dunedin Blue Jays lost 7-0 against the Palm Beach Cardinals. They were no-hit until the first batter in the bottom of the ninth. The Bisons, on Friday, were no-hit through two outs in the ninth before Anthony Gose's single broke it up. Some sad no-hitter stats from the Lansing Lugnut's Slavko Bekovic:

As far as @BlueJays affiliates go, New Hampshire, Dunedin, Lansing (x3) and the GCL team have all been no-hit in 2013.

The Vancouver Canadians also won, 8-2, over the flavourful Hillsboro Hops. Tom Robson threw six innigns of four-hit ball to get the win. I also found out that Jose Jose has been promoted from the Hops to the South Bend Silver Hawks.

Bluefield shelled the Elizabethton Twins 14-6, D.J. Davis and Derrick Lovelss with two RBIs each. Jairo Labourt struck out three but walked two in his four innings of work.

The Gulf Coast Jays lost 8-3, Jacob Brentz didn't give up a run! And finally the Dominican Summer League Jays won 4-1.

The Blue Jays are now tenth in minor league organziational standings with a .509 winning percentage. The Astros lead at .574 and the Reds are last at .420, according to MLBFarm.com.