Now I know many of you (if not all) are wondering who the hell I am. Some of you may remember my name from years ago in the low minors as a lefty that couldn't get hitters out. Well that of course hasn't changed, but I've had quite the journey through my minor league career.

My path from Little League to now sitting on this cramped bus in the Florida State League all started long ago. I was a chubby, non-athletic kid that was afraid of that white, round leather thing that we call a baseball. I grew up an Athletics fan in Northern California and always enjoyed perusing the dark doldrums of the Alameda Coliseum with my father and younger brother. I always tried to emulate different players, à la Jason Giambi, Barry Bonds, and Mike Piazza. And of course, who didn't love the in-box Gary Sheffield shimmy? I always had a decent arm, but my favorite position was always first base. My first year of high school was a wakeup call. Between focusing on my schoolwork (or lack thereof) and striking out every other at-bat I needed to shake something up. Hitting .220 will do that to you.

It took me ten or so years of playing to realize I had a gift. Left-handed pitchers are a hot commodity, whether at the high school level or professionally. Chicks dig the long ball, not the leadoff walk. High school was a struggle for me, I wasn't the greatest student nor was I any better on the ball field. I graduated, and had nothing planned college-wise. With my love for the game, I decided to walk-on to the local junior college and see where it would take me. Through busting my ass and having great on-field results I began to realize I may have a chance to make a career out of throwing baseballs. I began to have scouts and college coaches travel far just to see me throw. In 2008, I was drafted by the Jays in the 28th round; easily the proudest moment of my life. The next day I flew out to Dunedin, Florida to begin my professional career. I thought that I had life by the balls. I'll shoot straight through the organization and be in Toronto within a year or two. Little did I know...

The Gulf Coast League was the epitome of the minors. Early morning workouts, long bus rides, Latinos. My first day there I saw someone be released from his contract. He packed up his gear with tears rolling down his cheeks. I soon found out this wasn't a team sport—everyone was playing for themselves. This was cutthroat. I managed to get through the 2008 campaign with decent numbers and a better outlook on what was on the horizon. I knew that it'd be a grind to get to the top and it wouldn't come easily.

2009 was my first Spring Training and I knew that I had to bust my ass to get onto a full-season roster. I was a reliever in the GCL, but pitching coordinator Dane Johnson thought he'd give me a stab at starting. I took that opportunity and went on to not allow a run the entire duration of Spring. I was on my way to beautiful, scenic Lansing, Michigan. The crowned jewel of the midwestern United States. I had my ups and downs—well, more downs than ups. I remember vividly giving up my share of hits to Brett Lawrie, Eric Hosmer, and Dee Gordon just to name a few (there were maaaannnnny more). The 2009 season ended and I was already itching for Spring Training to start again.

I show up to Dunedin in March 2010 with a new outlook on pitching. I needed to be smarter on the mound. Throw inside, mix speeds, read hitters weaknesses and capitalize on them. Not throw fastballs down the damn middle of the plate. My first outing, I began to warmup and get ready to face the Phillies. I felt some tightness and didn't think much of it. The umpire bellows "play ball!" and I rear back for my first pitch..."POP!"...what the... Pain rushes through my forearm. I knew what had happened. Every pitcher’s nightmare. My career flashed right through my head. A week later I wake up dazed in a hospital bed, buzzed on painkillers and cursing at the surgeon’s assistant. Tommy John surgery is the reconstruction of the ulnar collateral ligament, UCL for short. Mine had completely torn in two, never a pretty sight. But hey, I had a brand new elbow. And in 12-16 months’ time I’d be a brand new pitcher. I'm laughing as I'm typing this. Let’s fast-forward to June 2011: I was back on the mound in Lansing, and it happened again...

Now at this point I had thought of just hanging my cleats up and calling it quits. I heard Home Depot paid well. But I hadn't come this far just to give up. I decided to give it another go around and to work my ass off. I had people in this organization that believed in my abilities. 2012 was an even tougher year for me. I had to sit out Spring Training and rehab my arm and watch guys that I had played with pass by me and make loads of money in the major leagues. I formed a bond with guys that suffered injuries and were rehabbing and it eased my stress a bit. Guys like Dustin McGowan, Jesse Litsch, and Sergio Santos were always there with me and it was fascinating to see them work their way back to the major leagues. Several months had passed and I was back to throwing off the mound again. I pitched in two rehab games in the GCL and began to feel my arm bark at me once again.

A week after resting my arm and resuming throwing again, I threw a bullpen in front of rehab coordinator Rick Langford. Everything felt great until I started snapping off curveballs. First one short hopped the catcher, and the next broke off seamlessly straight down the middle. I clenched my elbow and felt a grinding sensation. Fantastic. I walk back to the clubhouse with my head down and throw my glove and nearly hit A.J. Jimenez. He curses at me in Spanish. I hang my head in disbelief and walk over to the training room; my home away from home. I'd think many guys would just retire after what I've been through, but for one reason or another I wanted to pitch under the lights again. I love the game of baseball and nothing was going to keep me from reaching my dreams. 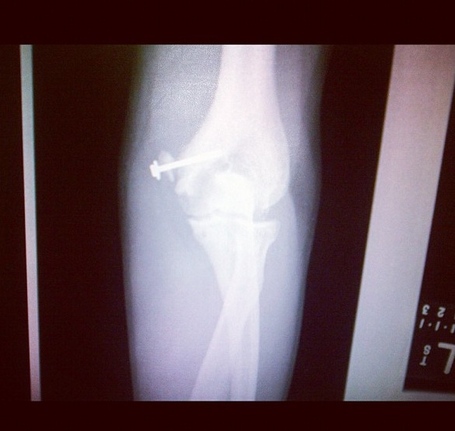 I had fractured my medial epicondyle. It's essentially the growth plate in the elbow. My repaired UCL ligament was actually too strong for the bone and shattered it right off of the foundation. A 2-1/2 inch titanium screw and three pins later and I was back in business. Two quick months of rest and I was able to begin a throwing program and start my climb back into action. I dedicated the entire 2012 offseason to getting my body into the best shape I've been in and preparing myself for Spring Training.

Now, I can comfortably say that I've been enjoying my best year as a Blue Jay. My arm has been in tip-top shape and my velocity has reached new highs. I owe a ton of my success to everyone that has believed in me, and my relentless pursuit for excellence. I just hope that I can continue my story for years to come.