J.A. Happ was welcomed back to the big leagues a little roughly giving up two runs in the first inning with a Nick Franklin triple doing a lot of the damage. The Mariners' lead was quickly erased in the top of the second, when the Blue Jays put up five runs against Mariners right hander Aaron Harang. Harang came into the game with 20 walks over the course of the whole year, but allowed three in quick succession. A Brett Lawrie single, Josh Thole ground rule double, and a nifty Emilio Bonifacio slap bunt took advantage of Harang's wildness allowing the Blue Jays to give a 5-2 lead back to Happ. Speaking of Josh Thole, he was originally not in the lineup, but was a late addition after J.P. Arencibia injured his right knee warming up in the bullpen.

A long injury delay for the home plate umpire followed before the bottom of the third, which eventually led to him leaving the game because of this:

The delay forced Harang to sit on the mound after warming up for a few minutes, which angered the Mariners. Shortly after, Edwin Encarnacion and Adam Lind hit back-to-back moonshots making it 7-2 in short order. Edwin's bomb was his 30th home run of the year. The rout was on as Harang exited the game going 2+ innings allowing 7 earned runs.

A fielder's choice by Humberto Quintero scored a third run for Seattle in the bottom of the fourth to make it 7-3 for Toronto. An error by Brett Lawrie in the fifth put Nick Franklin on second with none out and Happ's pitch count rising. A single and a ground rule double drove in Franklin to make it 7-4. Another walk was Happ's last action in the game, leaving with the bases loaded and none out giving way to Aaron Loup. Happ went 4+ innings (99 pitches) giving up 7 hits and 3 walks, also recording 2 strikeouts. Loup allowed another run to score on a fielder's choice, with the worst yet to come. A Justin Smoak double off the wall scored two more to complete the comeback and close Happ's book at 7 runs, 6 of which were earned. The Loup implosion continued with Quintero hitting a two run homer over the left-centre field fence to make it 9-7.

I was slightly worried that I had cursed the team during the second inning:

In the sixth inning the Blue Jays loaded the bases with the help of a few walks, but John Gibbons refused to pinch hit for Adam Lind or Colby Rasmus leading left hander Charlie Furbush to retire them and expose the mistake of the Blue Jays' manager. To be fair, Rasmus looked to be safe at first on a soft grounder to shortstop Brad Miller.

Brad Lincoln made his second appearance with the Blue Jays since being recalled pitching around a walk to get out of the sixth inning.

Oh hi, Minor Leaguer here. jays182 had to step out after the sixth so I'm taking over this recap! Tag team for the win!

Mark DeRosa got on base in the seventh because Michael Saunders lost the fly ball in the sun, but was ultimately stranded. Poor Saunders was probably embarrassed by that, with the ball landing a good 10 feet beside where he was camped. Lincoln was ineffective in the bottom half of the inning, loading the bases with one out before handing the ball over to Darren Oliver, who got a force at home and a strikeout to strand the runners.

The Blue Jays had a chance in the eighth, putting two on with two outs, but a Colby Rasmus broken-bat ground out extinguished the rally. Former Blue Jay Danny Farquhar came in, got two out before allowing a Josh Thole single, then struck out Jose Reyes to get his third save of the season.

Ugly, ugly game chart from FanGraphs. The Mariners came from a 4.6% win expectancy with one out in the fourth to come back and win it. 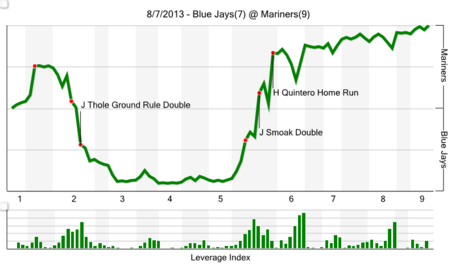