A travel writer’s tale: watching the Blue Jays from the Sahara

Share All sharing options for: A travel writer’s tale: watching the Blue Jays from the Sahara

I squint my eyes and twist my tanned toes into the fine sand of a Saharan dune while peering out towards the orange haze of a tumbling afternoon sun. Down in the flats, a nomad leads his weary camels towards town. He wears a white headscarf to shield his face from the harsh desert winds, and a long sky-blue gown collared with bright gold cloth, typical of Mauritania. As he passes, he looks up at the dune where I sit waiting to take a few photos of a mosque long since taken by the sands of time. He waves. I return the gesture.

A foreigner so far out here, in the heart of Mauritania is a rarity. This town was once settled along the great trans-Saharan caravan route where camel convoys once carried goods, slaves, and most of all, ideas. In the old town, there are almost as many Quaranic schools as there are people. Ancient libraries still shelve handwritten text on yellowing scrolls from hundreds of years back. Locals claim that Chinguetti is the seventh holiest city of Islam, and scholars still trek here from around the world.

Tourists used to come by as well. However, fears of terrorism, the departure of the Dakar Rally, and the red flag that so many foreign ministries have leveled on the region means that I’m the only tourist in town. The guestbook at the house I’m staying claims I’m the first visitor in over five months. 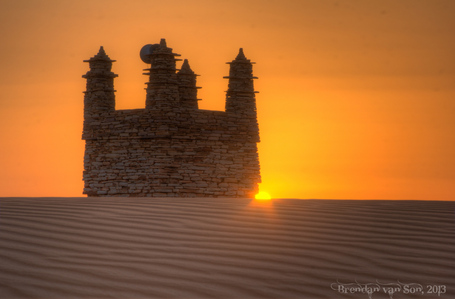 Soon, the sun settles behind the old mosque, its minaret, and ostrich-egg topped spire, are silhouetted in front of the dramatic sky. I flicker off a couple photos and then just lay back, enjoy the lightshow and the cool reprieve of a summer’s evening breeze. I watch the sand twist as a sandsnake meanders below the surface and realize it’s time to retreat towards town some three kilometers away before the desert wakes.

"I wonder how the Blue Jays did yesterday," I think to myself while using my camera’s tripod as a bat, swinging into the desolate dusk air.

With the heavy blue hue of the evening sky now settled fully over Chinguetti, the call for prayer sings out, muting all other sounds. I walk into the new town, where electricity has been installed only five years ago, and an internet connection is new as of last year. I pass by a couple men bowing in prayer and flip open the door of the internet café.

The monitor from a PC surely built around the same time as the last Blue Jays playoff appearance flickers as I punch bluebirdbanter.com into the toolbar.

"Jays lose third straight," it reads as part of me laughs the other part of me shakes my head.

Some might wonder why I put myself through the agony of being a Jays’ fan. But I’ve always liked a challenge. I’ve always preferred doing things the hard way. Hell, just to get here to Chinguetti I had to stowaway on an iron ore train for 14 hours, and hitchhike in the back of a vendor’s pick-up another eight. Sure I could have taken the bus, but the bus if for Yankees fans, those who marvel in the predictable and uninspiring. Me, I’m seduced by adventure, and teased by the idea that something inspiring might take place.

I hand the 10-year-old boy in charge of the internet café a coin and hike back across to the old town, where there are no road lights and the streets are simple sand. I open the door to my guesthouse, climb to the roof-top terrace where I’ve stowed my mattress. I lay back and stare unblinkingly into the star filled night completely and utterly awed.

A shooting star streams through the heart of the Milky Way and I can’t help but be humbled by the world I live in. What a perfect place.

Well, if the Jays ever start to win again it would be.

Brendan van Son is a travel writer and photographer. He hails from Alberta and has recently completed a long journey from Mali to South Africa on a scooter named Anne Murray. Read about his surreal experiences at www.brendansadventures.com and follow him on Twitter at @Brendanvanson.