Looking back at Mark Eichhorn's 1986 season

Holy hell was that ever a good year. Better than any of these sucky sucks are putting up right now.

Share All sharing options for: Looking back at Mark Eichhorn's 1986 season

Mark Eichhorn was a bad ass.

Somehow, I had forgotten about this. And apparently, his greatness has diminished over time in the memories of Jays fans. As evidence, Eichhorn somehow dropped from being the 29th best Jay of all time in 2006 to 41st in 2012.

Part of the so-called sabermetric movement has also worked to devalue the contributions of relief pitchers. It makes sense, as relievers generally pitch fewer innings and thus even a dominant reliever has far less of an impact than a good starter. That’s all fair, but it shouldn’t make us less appreciative of terrific relief performances.

So the other night when my FanGraphs/Beyond the Box Score pal Matt Hunter tweeted about the best relief pitcher seasons of the past 40 years, it took me a second to recall Eichhorn’s submarine delivery and come to his defense.

If it doesn’t, it’s likely because you’re unfamiliar with the RE24 statistic. In really brief terms, RE24 is short for "runs above average by the 24 base/out states." What that means is that the stat calculates the expected runs for a given situation and compares it to the expected runs after the play.

As an example, in 1986 a team with runners on the corners and nobody out would have a run expectancy of 1.7075 runs. If Eichhorn entered the game and immediately got a strikeout, the batting team’s new run expectancy would be 1.1574. That difference of 0.5501 runs is credited to Eichhorn, because he lowered the opposing team’s run expectancy by making their hitting situation less favorable.

RE24 adds up that change in run expectancy for every single play a pitcher or hitter is involved in. It’s a nice stat for relievers because it accounts for situations in which a reliever enters in a jam (inherited runners) and also when they make a situation worse but perhaps are yanked for another reliever to clean up. The pitcher isn’t hurt by the situation he came into, and he can’t be saved by the reliever after him. 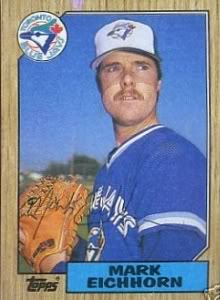 But you don’t need fancy stats to appreciate what Eichhorn did in 1986. Let’s have a look at some standard and more advanced metrics:

What those rankings suggest is that not only was Eichhorn very good in 1986, that season holds up as very good even when league context is adjusted for. It’s one of the greatest reliever seasons any of us have seen in our lifetime (and I wasn’t even alive for the first five weeks of it!).

So what’s the point? There isn’t one really, it’s just nice to look back and appreciate a great Jays performance from the past. There’s not exactly a ton to be excited about in the present. If you really want to stretch for something positive in the present, Brett Cecil ranks 26th in RE24 among relievers for 2013. Woo-hoo?