Jose Bautista has no time for Steve Simmons

Share All sharing options for: Jose Bautista has no time for Steve Simmons

After the fantastic American League Wild Card game between the Athletics and the Royals, Steve Simmons sent out this tweet, referencing Jose Bautista's complaints that the Blue Jays didn't do enough at the trade deadline to bolster the club:

The Kansas City Royals made no trades at the non waiver deadline. The Oakland A's made two huge trades. Does @JoeyBats19 know about this?

That was typical Simmons, trying to get attention by eliciting angry responses from the people who still follow him for some reason. He has criticized Bautista's leadership (and showed off his complete understanding of correlation and causation) before, so this really isn't anything surprising. I am happy that he doesn't tweet more about baseball, because he does write some horribly dumb (and douchey) crap on the hockey side.

.@simmonssteve who are you and why are you talking to me?

Best tweet ever. I actually laughed out loud for a good 30 seconds after seeing that. Bautista the best. Please don't ever leave.

Oh, just in case the above tweets are ever deleted, here is a screenshot to preserve them forever: 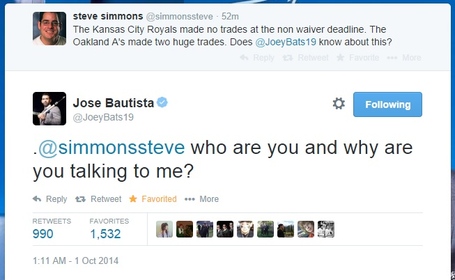 I almost want to make a t-shirt out of that tweet.

For clarification, which is next to impossible in this venue, Jose Bautista doesn't tweet. A marketing firm takes care of his account.

Whatever makes you feel better, Steve.

. @simmonssteve for clarification, no they don't....i tweet myself and that was me last night just so YOU are sure of it