I was struck by comments on this and other blogs about Brandon McCarthy and Brandon Morrow.

The consensus was that McCarthy was well deserving of a multi-year contract in the 3/$36 range, but that the Jays would be foolish to pick up Morrow’s 1-year $10m option.

I thought it might be interesting to compare the two Brandons over the last five years. 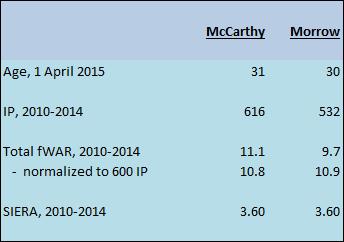 Clearly, if you look at the five-year period in aggregate, the two pitchers are very comparable.

The major difference between them is timing: Morrow has missed most of the last two years, after having a very strong 2010-2012 (averaging an fWAR of 3.2 over those three years).

In 2013, Morrow made 10 starts (54 innings) but was performing well under his level of the preceding three years and was reporting forearm tenderness. The Jays initially thought that the problem was minor – they put him on the 15-day DL on June 1st, and started a rehab assignment in Dunedin later that month. He lasted all of 35 pitches before the pain returned. Suspecting something more serious, the team consulted Dr. James Andrews who diagnosed an entrapped radial nerve. He prescribed 6-8 weeks rest. As this would have meant Morrow starting a rehab assignment in September, the Jays chose instead to shut him down for the remainder of the season.

Morrow later confirmed that he was in discomfort early in the 2013 season. But he admits he wanted to try to pitch through it, especially as injuries and ineffectiveness struck other members of the rotation as the Jays’ pre-season hopes unravelled over the first two months.

(As an aside, some people think that the injury was the result of using too many cut fastballs in spring training 2013. Morrow does not agree.)

But in any event, by January 2014, Morrow’s rehab was complete. As he said:

"Everything has been great," he said. "I went through the whole rehab program with no problems at all. I wasn’t sore one day through the whole process. I threw five or six bullpens, finishing up the first week of December. Four innings was my last one, where I’d throw 15 pitches and then sit down five or six minutes. Throwing 100% at game speed I had no problems. I’m confident in the way I feel now."

In spring training 2014, Morrow was rusty but pain-free. His first 6 starts in 2014 were not great – a 5.93 ERA but with a 4.05 FIP and an opponents’ BABIP of .359. Then it happened – a torn tendon sheath in his right (pitching hand) index finger than kept him out for four months. When he returned in September, the finger appeared to have been completely healed: in the 7 games he pitched out of the bullpen (admittedly a SSS) he had a FIP of 2.30 and a SIERA of 3.61, and his average fastball velocity was in the 97 mph range.

Some writers have called Morrow injury prone, often citing his type 1 diabetes as a contributing factor. Others do not agree with that characterization, noting that his oblique injury in 2012 and entrapped nerve in 2013 were the only instances of those injuries in his career, and that the torn finger sheath is a "freak" injury more common to rock climbers than to pitchers. They note that in his career, Morrow has never had an injury that required surgery.

So where am I going with this?

The Jays have a $10 million option on Morrow for 2015, with a $1 million buyout. Many writers feel that it would be foolish for the Jays to exercise that option. I am not so sure.

1. Know when to hold ‘em: To make it to the playoffs, teams often need to gamble a bit on players who have significant upside. Morrow’s upside is huge – probably higher than any 2015 FA starter beyond the "big 3".

2. Just bad luck? Morrow’s injury history is a concern. But given the one-off nature of the injuries, there is some justification for optimism that his bad luck is behind him.

3. The price is right. At a net price of $9 million, Morrow would only need to put up a fWAR of about 1.5 for the Jays to break even. And given the difficulties that the Jays have experienced in luring top free-agent SPs to Toronto, it may well behoove them to hold on to the players already under control.

4. The downside is limited. If Morrow struggles in the starting rotation, he has demonstrated an ability to contribute from the bullpen - possibly even as closer. The price of top bullpen help is increasing to the point where $9 million is an overpay but not a ridiculous one. Plus, if something changes (such a a major FA acquisition) it appears likely that the Jays could move Morrow and his $10m contract relatively easily in today’s pitching-starved market. And remember that we are talking about a one-year contract

5. Can’t have too much pitching. The old adage is true – a team can never have too much starting pitching. If Morrow were healthy and performing from spring training, it would give the Jays the luxury of moving Happ to the bullpen as a long man and spot starter, and also as backup for injury.

Clearly the cash-constrained Jays would have to do something creative to afford the Morrow option – unless they had a buyer waiting in the wings and essentially did a sign-and-trade. Much has been said already of the benefits of trading a Dickey, Buehrle or Reyes – even if full value were not received in return – just to remove the financial handcuffs. A Happ or a Lind could also be moved, and replaced with a FA or by trade. Or, if the price were right, a mega-deal could be done for a J-Bau or EE.

The bottom line? I see too much value in Morrow's option to just let him walk.