Dustin McGowan, looking for rotation spot, will ramp up slowly in spring training

Share All sharing options for: Dustin McGowan, looking for rotation spot, will ramp up slowly in spring training

Entering his fifteenth season in the Blue Jays organization, Dustin McGowan will be looking forward to something that he hasn’t done since his ninth year with the Jays: leave spring training as a member of the 25-man active roster. In fact, in his big league career, McGowan has only thrown 37 innings in April—35 of which came in 2008, the first and only season that he broke camp as a member of the starting rotation.

McGowan has informed the Blue Jays that, in 2014, the starting rotation is once again his goal. The club has obliged his request, on the condition that he work separately from the other starters in a personalized program at the beginning of spring training.

"We’re gonna start off slow, not like regular training," McGowan told Bluebird Banter, "I will build up slower than everybody else, just to see where it leads us."

There is now less than a week left until pitchers and catchers report and the last two spots in the rotation is still up for grabs. The Blue Jays have not yet made any additions to it this offseason, but McGowan would have to beat out the likes of J.A. Happ, Esmil Rogers, Todd Redmond, and Drew Hutchison, not to mention convince the Blue Jays that he can pitch deep into games and maintain his health.

"Right now, I know it’s a long shot, but we’ll see where it goes. I’m hoping for the best."

The 31-year-old (32 by Opening Day) was a first-round pick by the Blue Jays back in 2000—a compensation pick for Graeme Lloyd—rising through the system one level at a time until he was called up from double-A New Hampshire to make his major league debut in 2005 against the Rangers. He threw five innings of two-hit, one-run ball, striking out six and walking just three that day. The six strikeout mark still ties him for second place on the franchise leaderboard for major league debuts. McGowan would go on to have a career year in 2007, but then his well-known streak of injuries started in early July 2008 when he was removed from a start with soreness in his right elbow. In that game recap, Tom Dakers wrote:

So let's hope McGowan doesn't need to miss any time, that a rest over the till after the All-Star break is enough for him.

Well, it turned out that his rest was a little longer than expected. By the end of July, he had surgery to debride his frayed labrum. He started soft tossing in 2009 but then tore the ACL in his knee. A year later, he was back on the road to recovery, then in 2010 he hurt his shoulder again and visited Dr. James Andrews for season-ending surgery to repair a torn rotator cuff in June (incidentally announced on the same day that the Blue Jays designated Edwin Encarnacion for assignment). In the press conference that followed the announcement, Alex Anthopoulos described the surgery, in a very Anthopoulosian fashion, as "not bad news and not good news."

Little did he know that Dustin McGowan would not pitch in the majors again until September 6, 2011 when he was called in to mop-up a 11-0 deficit against the Red Sox. I still remember the sparse crowd at the Rogers Centre giving McGowan a standing ovation as he walked off the field that night.

The reaction from the normally quiet hometown crowd reminded McGowan of what it felt like to be a major leaguer again. But even though he lost prime years of his career to injury, McGowan never felt depressed because he was able to spend time with his family during his recovery.

"Fortunately for me, the time when I got hurt was the time when I had my first little girl, so I got to watch her grow up," McGowan explained, "a lot of guys don't get to see their kids grow up at a young age because they're going from city to city." 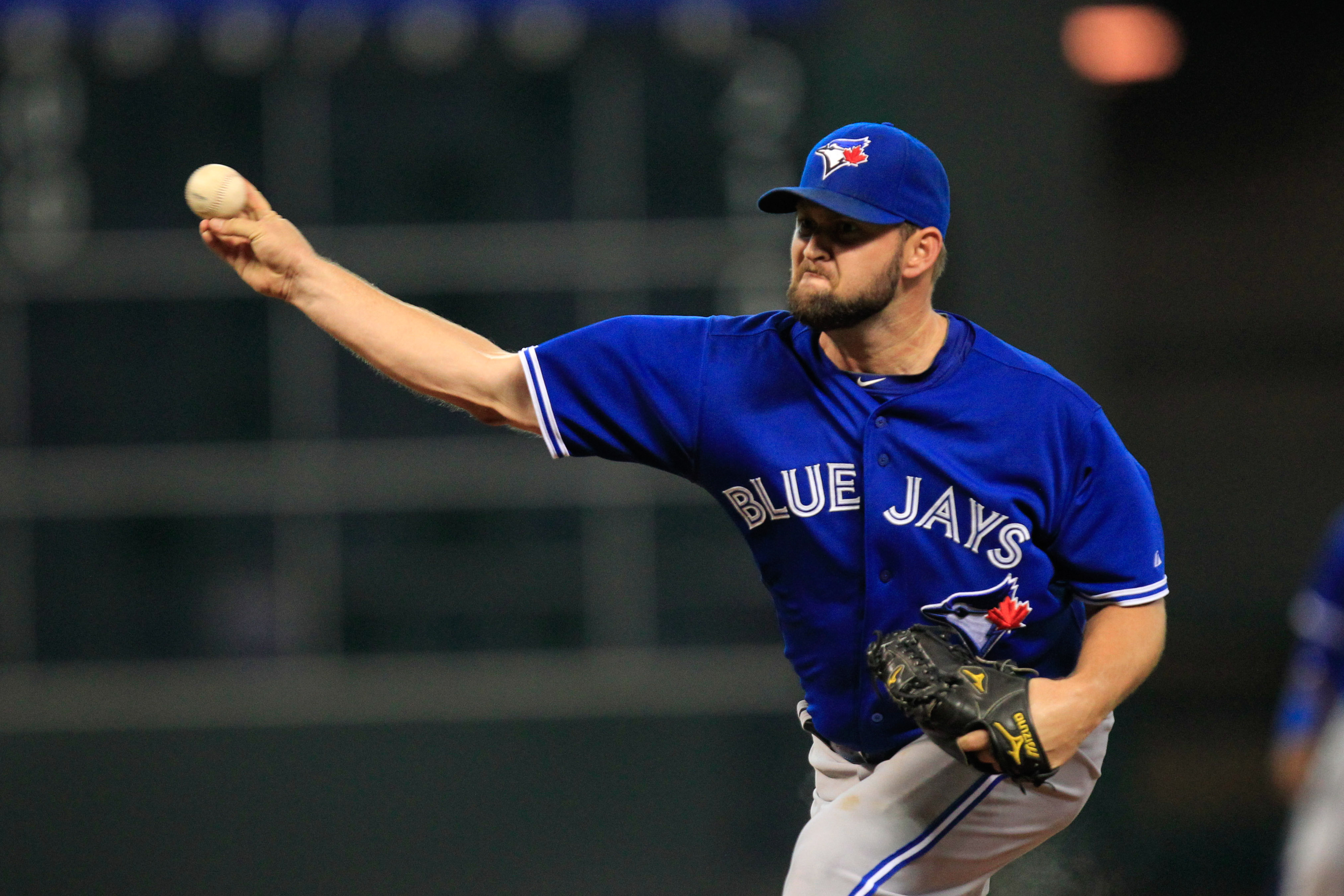 Bluebird Banter also interviewed Todd Redmond, another weighted-ball program participant who will be fighting for a rotation spot this spring.

The Blue Jays' commitment to McGowan—signing him to a three-year contract extension that guaranteed him $4.1 million—probably helped him through the tough rehab process too. Of course, right after the signing McGowan was diagnosed with plantar fasciitis and then later had shoulder inflammation issues which caused him to miss the entire 2012 season. His shoulder was still "barking" at the beginning of spring training in 2013, which led to his being placed on the disabled list to start last season.

However, during that stint on the disabled list, Dustin McGowan decided to make a massive change in his exercise routine: he joined the weighted-ball program that was popularized by teammate Steve Delabar. He worked with trainer Jamie Evans to personalize the program to focus on strengthening his arm and shoulder muscles in order to increase stamina and reduce chances of injury. When he was finally re-activated on June 8, he pitched very well in relief before straining he injured his oblique in August. McGowan is still a firm believer in the weighted-ball program and have been following it this entire offseason.

"This has been the first offseason doing the ball program, so that has been my main focus," McGowan said, "I don't think it is for my velocity, hopefully it will make me stay strong. That's what our program's set up for."

Asked about the use of biomechanics to analyze where his delivery may be causing his injuries, McGowan thinks that pitchers have to be comfortable with how they pitch and that too much analysis may not be a good thing.

"I believe that if you start changing people’s mechanics, that’s when people really do get hurt," he said, "We play baseball, people will get hurt—there’s just no natural way to throw a ball."

And what would be his goal for this season?

"To play the whole season. That’s all I could ask for."