For a second straight season, knuckleballer R.A. Dickey will take the hill on opening day for the Toronto Blue Jays, acording to the Blue Jays' official Twitter account.  The game will start at 4:10 pm Eastern on Monday, March 31 at Tropicana Field against the Rays (so sneak out of work early). Toronto last opened up their season in Tropicana Field in 2005, when Roy Halladay led the club to a 5-2 victory over the then-Devil Rays.

The rest of the rotation is still to be determined, according to Shi Davidi, who also notes that the home opener will actually be the fifth game of the season. Because of that occasion, John Gibbons is hinting that the pitcher who starts the fifth game of 2014 may not necessarily be the club's fifth-best starter.

Gibbons mentioned that Dickey had always done well at Tropicana--in three starts last season, Dickey held the Rays to a .176/.256/.284 line and gave up just one homer through 22 innings. I remember his tossing a complete-game two-hitter against the Rays last year. The Blue Jays have been horrible lately in the Florida dome so they will need Dickey to give all he can on Opening Day. One bit of unfortunate news is that Dickey will likely not be made available to face the Mets in the two-game exhibition series in Montreal, meaning fans won't see a Dickey-Travis d'Arnaud matchup this year.

The Blue Jays have signed outfielder Brett Carroll to a minor league deal with no invitation to major league camp. The 32-year-old will provide outfield depth for the Buffalo Bisons.

Dustin McGowan was seen taking grounders at second base yesterday. By the way, Ryan Goins had a 66 OPS+ in 2013 while McGowan had a 52 OPS+ in his last full season. Start your speculations now, folks: 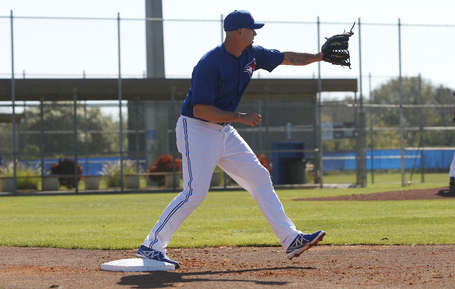 Not news but a significant day in Blue Jays history. In 1999, the Blue Jays traded away a disgruntled Roger Clemens to the New York Yankees for David Wells, Homer Bush, and Graeme Lloyd, which was a pretty good haul taken by Gord Ash considering Clemens wanted to leave. The other option Ash had was to trade Clemens to the Rangers for hot prospect Ruben Mateo, so he made the right choice there. The trade still has implications on the roster today as there Lloyd's departure led to the Blue Jays drafting their future second baseman Dustin McGowan.